The Young Alumni Excellence Award, sponsored by The Air Force Academy Association of Graduates (AOG) annually seeks and accepts nominations for graduates who are 15 years or less from their graduation year and have distinguished themselves by obtaining a high level of professional accomplishment whether in military or civilian life, demonstrating excellence in all they do. They possess high standards of integrity and character to positively reflect and enhance the prestige of the United States Air Force Academy.

If you know of someone you would like to nominate, please go to the link below and fill out the required form. Please fill out the form as completely as you can. We need at least one type of way to contact the nominee. If you have questions regarding this form, please contact Corrie Grubbs.

Four USAFA graduates have been named as this year’s honorees for the Association of Graduates’ Young Alumni Excellence Award. The award recognizes graduates for exceptional professional accomplishment, whether in military or civilian life. Nominees must be within 15 years of their graduation year to be considered. The winners will be recognized at regional Founders Day banquets this spring.

This is just the third year for the relatively new AOG award and a total of 13 alumni have received the honor so far. 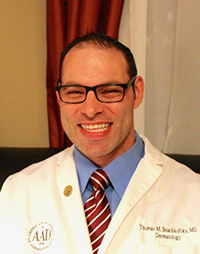 Currently the chief dermatologist with the 6th Medical Group at MacDill Air Force Base in Florida, Beachkofsky has earned national recognition for his efforts to unravel the genetic and immunologic etiologies of severe adverse drug and vaccine reactions. He uses state-of-the-art sequencing equipment and advanced bioinformatic software platforms to provide comprehensive genomic profiling of affected patients. The technology allows for analysis of an individual’s entire genetic code and provides insights into how the immune system functions. The data helps prevent adverse reactions, while also targeting treatment approaches. While Beachkofsky’s academic and research efforts are on-going, so are his daily clinical efforts to improve the lives of wounded warriors and others affected by traumatic injury and symptomatic scarring. He has recently opened a specialized scar treatment center at the 6th Medical Group and harnesses the power of multiple advanced laser and light technologies in combination with conventional therapies to improve the form and function of the skin. To date, Beachkofsky has amassed more than 20 publications in peer-reviewed medical journals, authored multiple textbook chapters and presented his research more than 30 times at local regional national and international venues. In addition, he has traveled internationally to provide humanitarian services to patients in Thailand, El Salvador and Trinidad & Tobago. He has been awarded seven different research grants valued at over $4 million. 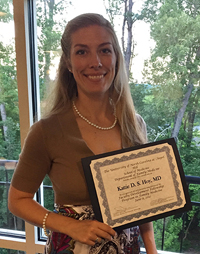 While at the Academy, Hoy served as an EMT provider and was a "Wings of Blue" jumpmaster and parachute instructor completing a total of 321 jumps. Immediately after graduation, she entered medical school at the Uniformed Services University of the Health Sciences (USUHS). During her early years she volunteered to help staff a free clinic in Quito, Ecuador, assisting doctors providing obstetric and pediatric care. She completed her three-year internship and residency at the Eglin Air Force Base Family Medicine Residency Program. Because of her superior teaching skills, Hoy was selected to remain at Eglin AFB in an adjunct faculty role after residency graduation. During her two years of faculty grooming, she typically took care of more than 20 patients each day and managed a panel of more than 1,500 patients. Her exceptional leadership skills led to her quickly being named he Family Health Clinic medical director. In this role she supervised, mentored and assured medical standards for 14 providers. In 2014, she was competitively selected to join the Eglin AFB Residency Program as a full-time faculty member. In 2015, Hoy deployed as the chief of the medical staff — 386th Expeditionary Medical Group — at an undisclosed location. She oversaw all medical operations for three bases supporting Tri-service and Coalition Forces mission readiness. On Hoy's return, she was named the residency's assistant program director. She has been in charge of all curriculum development. In addition, she heads all efforts to assure compliance with accreditation requirements. Hoy is presently the acting program director during the group director's deployment. Hoy's volunteer work has been extensive, including serving as the Department of Defense’s Bone Marrow Donor Registration Drive officer in charge — collecting more than 800 new registration kits. She also volunteered as a Tar Wars presenter educating children in grades 5 through 7 about the harmful effects of tobacco use. She was a key medical volunteer at the Eglin AFB 75 Anniversary Air show, setting up stations, working and supervising the urgent health care. 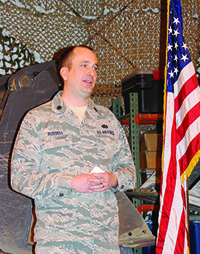 Currently assistant professor in the Department of Civil & Environmental Engineering at USAFA, Russell has enjoyed a successful early career in Air Force civil engineering. He began his career at Langley Air Force Base in Virginia and was quickly entrusted as the construction program OIC — a critical member of the F-22 Integration Office and Site Activation Task Force. In this capacity he served as lead for all facility requirements for the $300M+ construction effort to Beddown the F-22 Raptor at Langley. Also while at Langley, Russell deployed to Iraq for seven months as a project engineer responsible for 16 projects valued at $30M and authored a $25 million MILCON Southwest Iraq Development Plan providing combat service support for two Army divisions and Talil Air Base. Upon return from deployment, Russell was handpicked to be the Readiness and Emergency Management Flight commander leading 23 military personnel as well as a Disaster Response Force and Emergency Operations Center. He would go on to earn his master’s degree in engineering at the University of Texas at Austin. He would then serve as assistant professor in the Department of Civil and Environmental Engineering at USAFA from 2008-10. Concurrently, he served as the Dean of Faculty’s construction liaison and project manager for all design and construction projects in academic areas, including the $32 million renovation of Fairchild Hall highlighted by the acclaimed Falcon Center and Hall of Exemplars. He garnered several awards, including Engineering Mechanics Instructor of the Year. Russell’s outstanding performance was acknowledged as he was competitively selected to pursue a doctor of philosophy in civil engineering. He attended North Carolina State University from 2010-13 and earned his PhD in civil engineering. Upon graduation, Russell served as the Logistics Directorate Engineer Division MILCON Programs chief and European Reassurance Initiative construction lead on the Joint Staff at Headquarters EUCOM from 2013-16. As chief, he was responsible for all construction programs across the 51-country area of responsibility working directly with the Department of Defense European Ministry of Defense partners, NATO and international governmental organizations. Russell next served as deputy commander of the 8th CES Legendary Red Devils at Kunsan Air Base, Republic of Korea. The squadron would go on to receive the award for the Air Force’s Best Small Civil Engineering Unit honor. Russell has since returned to the Academy. Throughout his career, Russell also has been involved in his community, including volunteer efforts in youth soccer, Boy Scouts of America and English lessons for Korean nationals and young professionals. 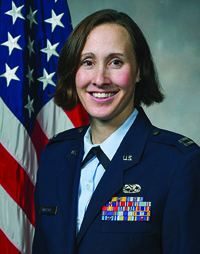 Upon graduation from USAFA, Williams attended maintenance training at Sheppard Air Force Base, Texas, and was assigned as aerospace ground equipment flight commander in the 3rd Equipment Maintenance Squadron at Elmendorf Air Force Base, Alaska. During her very first operational assignment, she was given leadership over 12 different aerospace ground facilities and 121 military and civilian personnel. The unit supported all ground equipment for the F-22, F-15, C-17, E-3, Red Flag, and 13 radar sites. As the flight commander, she led an effort to modify a servicing cart oxygen line for the F-22A that reduced APU ground aborts from 15 a month to an average of only 2.5 per month. She was the 3WG AGE action officer for a visit from the President of the United States to Elmendorf and POTUS Secret Service lauded Williams for her excellent support. After a year in the EMS, Williams became the accessories flight commander in the 3rd Component Maintenance Squadron. She worked in the ACES II ejection seat and F-22 Stored Energy System during her time there. In 2012, she was reassigned to the 69th Maintenance Squadron at Grand Forks Air Force Base as the maintenance operations flight officer in charge of the RQ-4 Global Hawk aircraft. Ellen was the winner of the 2012 Lt. Gen. Leo Marquez award for the 69th Reconnaissance Group. While at Grand Forks, Ellen completed her master’s degree in project management from Embry-Riddle University. In 2013, she deployed to Al Dhafra Air Base in the United Arab Emirates in support of Operation ENDURING FREEDOM. Her work as the Unit Assistant OIC generated 214 combat sorties, 4,500 flying hours, 20,000 battlefield images and 273 extended range communication bridges. Williams was the squadron company grade officer of the Year for 2013. During her time at Elmendorf, Williams supported the Habitat for Humanity and Toys for Tots programs. She also supported the Operation Air Force program, as well as an annual half marathon and a local craft fair that raised money for scholarships. In 2015, Williams went to Wright-Patterson Air Force Base in Ohio to become a program manager with the F-16 Operational Flight Plan for the F-16 Division of the Air Force Life Cycle Management Center and has excelled in that role. During her time at Wright-Patterson AFB, Williams has taken a strong leadership role in the Southwest Ohio Chapter of the Association of Graduates. She also has been involved in expanding the Operation Air Force program in the Dayton area.