The Association of Graduate's Heritage Trail: Celebrating the lives and accomplishments of members of the Long Blue Line and the heritage of the United States Air Force Academy.

As part of the AOG's continuing efforts to promote the history and traditions of the Academy, the area adjacent to Doolittle Hall features the Heritage Trail. A plaque on the path to the Heritage Trail reads, “The willingness with which our young people are likely to serve in any war, no matter how justified, shall be directly proportional to how they perceive veterans of earlier wars were treated and appreciated by our nation.” George Washington 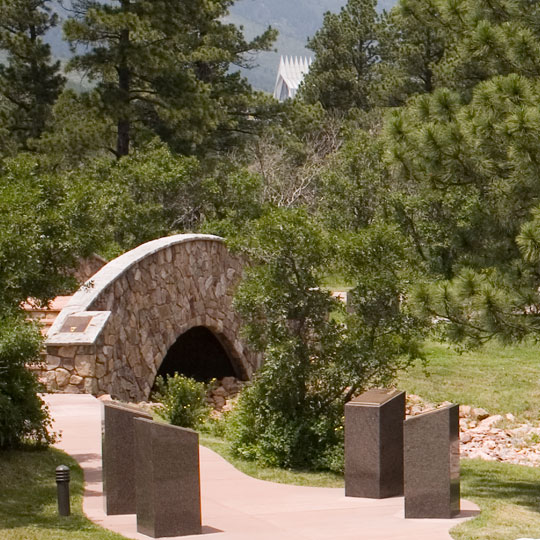 The trail, which serves as a visual reminder of the lives and accomplishments of the Academy's proud Long Blue Line, has been an important part of the Academy experience. For many years, members of each new class arrived for inprocessing to begin their Academy journeys. Before loading into the buses waiting to transport the appointees to the cadet area, the soon-to-be basic cadets walked through a portion of the Heritage Trail. Cadets return to the area throughout their Academy careers — for more extensive briefings or on their own — to reflect on graduates who have served and in some cases were imprisoned or died fighting for this nation.

Impressive as it is, the current Heritage Trail comprises a small portion of its even grander future. The vision for the Heritage Trail includes several other nodes and a memorial park, which will eventually include statues and other elements recognizing the Academy and its graduates.

While honoring the legacy of the Long Blue Line, the Heritage Trail provides a rich opportunity for graduate classes to directly contribute to the Academy by sponsoring a portion of the trail through their class-giving program. Private support continues to allow the Academy to reach new levels of excellence and has a direct impact on each cadet. Gifts also allow graduates, parents and friends to leave a legacy at the Academy, which for many has played an important role in shaping their lives.