From the heart of the Long Blue Line - Marcus Anderson '61

As a graduate and a former senior leader at the Air Force Academy, Marcus Anderson has an understandable affinity for the institution.

“The Academy shaped my life, provided me the tools for a successful and enjoyable career, and a set of values I have retained and used ever since being a cadet in the class of 1961,” Anderson says.

His career took him from pilot training to fighter pilot, from the Vietnam War to a NATO staff position, and from director and commander roles around the world to his final military assignment as Air Force Inspector General in the Office of the Secretary of the Air Force. He retired in 1996.

Throughout his career and global experiences, Anderson was grounded in the experiences he had at the Academy, especially those that dealt with character and discipline.

“The honor code was very significant to me,” he said. He worked on it closely as a cadet honor representative for the 8th Squadron. Little did he know he would need that experience while we was the commandant and as a volunteer after retirement.

“When I was commandant, we had a major honor incident that again focused me on the importance of the code and a fair, effective system for the cadets to apply it. Finally, in 2010, at the request of the superintendent, I led a team that reviewed the honor system and provided recommendations for his consideration,” Anderson says. “So, yes, I consider the honor code a key aspect of the cadet experience.”

It is so important, in fact, Anderson wishes the Center for Character and Leadership Development (CCLD) had been established when the Academy was created. His class was the third graduating class at the Academy. As a former fighter pilot, he also wishes he had access to free-fall jump training and glider flying as a cadet. All three programs are available to today’s cadets.

Since retirement, Anderson has remained connected to the Academy. He served on the board of the Association of Graduates and continues as a trustee for the Falcon Foundation. He and his wife also have supported additional programs at the Academy, including the CCLD and leadership programs for cadets in their first two years at the Academy. 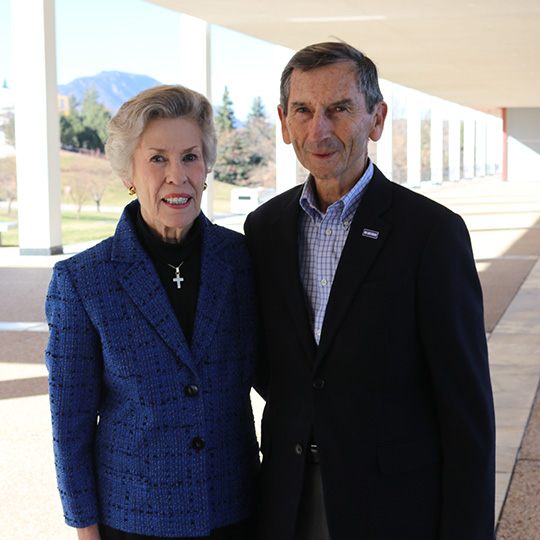