USAFA rolls out the welcome mat for Elon Musk

by Jeff Holmquist, Association of Graduates

It’s hard to imagine anyone receiving a more enthusiastic reception than Elon Musk, as he visited the United States Air Force Academy on April 7.

When the SpaceX founder unexpectedly appeared on the staff tower in Mitchell Hall, preparing to share lunch with the Cadet Wing, the building erupted in thunderous applause.

Later in the day, when Musk was the featured speaker for the 2022 Ira C. Eaker Distinguished Lecture on National Defense Policy, the cadets inside the Arnold Hall Theater were equally as raucous.

“That’s a warm welcome,” he laughed. “I haven't seen you guys so excited … ever.”

Perhaps it’s easy to understand the rock-star status Musk holds among many in the Cadet Wing. His companies, which include the all-electric automobile manufacturer Tesla, are on the leading edge of engineering innovation and have begun opening up opportunities for space exploration that have previously been little more than a dream.

Plus, Musk speaks the language of many cadets, rattling off formulas for required rocket thrust and sharing a vision for the future that has usually been relegated to the movie screen.

Musk admitted to cadets that he was influenced by movies, especially “Star Wars” — the first ever movie he saw in a theater. He was just 6 years-old.

“That made a huge impression,” he said. “It blew my mind. It probably had an influence on future career choices.”

Today, Musk is helping to turn make believe into reality.

“I think we want to work hard to make science fiction not fiction forever,” he told the Cadet Wing in the Arnold Hall Theater. “We want to make a real spacefaring civilization out there among the stars — that's the exciting future. And do exciting new technologies that have never been seen before and go find what's out there in the universe. That’s what we want to do. That’ll be a glorious future.”

Throughout his daylong visit, Musk interacted with several cadets to hear about some of the research being conducted at the Academy, including artificial intelligence for drones, autonomous systems, colonization policy and more. He also learned about the Academy’s aspirations to build a space education center on campus. He answered a broad range of questions at his afternoon lecture.

Musk talked about the invasion of Ukraine by Russian forces and shared his company’s efforts to assist the smaller country in defending itself.

“One of the first things that's going to happen in war is to disrupt or destroy the other side's communications, which is obviously what Russia did,” Musk said. “They did a mass hack of Ukraine’s satellite connectivity.”

To counteract that cyberattack, Musk shipped approximately 5,000 additional communications terminals to Ukraine, helping the country connect with Musk’s expanding Starlink satellite network aimed at providing internet access to all corners of the world.

“It has provided some critical communications capability for the defense of Ukraine,” he told the crowd. “I’m glad we were able to help out. And we'll keep doing it.”

Responding to a question about the growing problem of space debris in the Earth’s orbit and who is responsible for cleaning up the junk, Musk said the issue is complicated.

Debris at a certain altitude — below 1,000 kilometers — isn’t too much of a concern as the atmosphere will eventually burn things up.

“Demisability is important,” he said. Most of the satellites his company is launching these days are at low enough altitude that they will be swallowed by the atmosphere if they malfunction in the future, he noted.

But debris circling at between 2,000 and 3,000 kilometers could take centuries to burn up, he estimated.

“There will probably be a little bit of clean-up needed from time to time,” he suggested.

Musk said he hopes SpaceX’s Starship, which is under development, will soon be able to gather some of the debris that threatens satellites and the International Space Station.

“It will kind of be like a space PacMan,” he laughed. “Get up there and chomp up some pieces.”

Speaking of the SpaceX Starship, Musk said it will be a “game changer” for space flight and exploration. Starship will be the first vehicle that achieves “full and rapid reusability,” Musk told the Cadet Wing.

If all parts of Starship are reusable, Musk estimated that a typical launch will cost no more than $2 million. A launch of SpaceX’s Falcon 9 rocket currently carries a $67 million price tag. Historically, launches have run in the neighborhood of $150 million, he added.

“We’re basically trying to make spaceflight like air flight,” he said. “Air flight used to be dangerous and rare, and now it is common and it’s safe. We need to make it [spaceflight] common and safe. When rocket launches get boring, that’s success. Although it’s hard to imagine rocket launches ever being boring.”

Lt. Gen. Clark pointed to the cadets in the audience and suggested this next generation will help make Musk’s vision a reality.

During a brief question-and-answer session, C1C Briana Barnett asked Musk about his wealth and if he feels a “social or moral obligation” to society because of it.

Musk said he does, but then shared his thoughts on economics, suggesting that too many people focus on scarcity rather than abundance.

He emphasized that the world economy isn’t about money, but about the exchange of goods and services. In order to increase the standard of living for more people, he said overall productivity needs to rise and more goods and services need to be exchanged.

“Growing the pie is really important,” he said.

Too many so-called experts, however, claim the economic pie is static, Musk noted.

“They have a zero-sum mindset,” he explained. “For one to have something, it must be taken from another person. This is a very poisonous worldview, because obviously the pie is growing.”

Musk added he rarely listens to economists because of such zero-sum thinking.

“Those who are good at economics, why aren’t they rich?” he chuckled.

If Musk could go back in time, C2C David Tao asked what lessons the entrepreneur wished he’d learned earlier in life. Musk paused before answering.

“There’s a long list of lessons I wish I had learned earlier,” he said. “I’m not sure how I’d rank them exactly. But I think it’s generally a good aspiration to try to be a little less stupid every year. I’m not always successful.”

One important lesson, Musk responded, is the importance of seeking out criticism and feedback from those people who care about you. That feedback loop makes everyone more successful in life.

In closing, Musk shared his vision for the future of aviation. He predicts electric airplanes are just around the corner.

“Everything is going to go fully electric, with the ironic exception of rockets,” he said.

He suggested supersonic flight in electric aircraft is also very possible. The key will be to get planes to a higher altitude so there is less drag on the vehicle.

“I think people don't quite realize how revolutionary this can be,” he said. “It's really quite profound.”

Musk also envisions a future where air combat is conducted almost exclusively by drones. Analog airplanes will still have a role to play, he said, but the use of unmanned vehicles will grow significantly in future years. 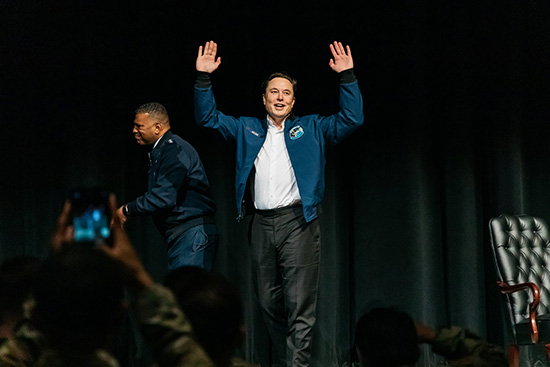 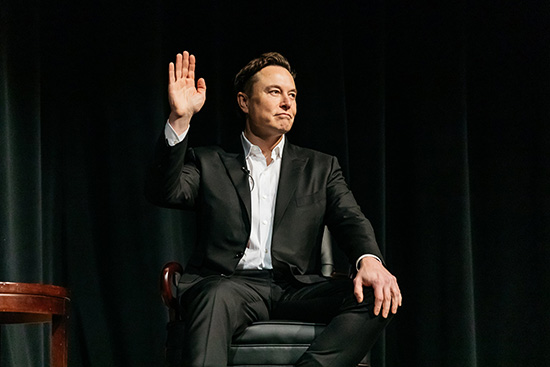 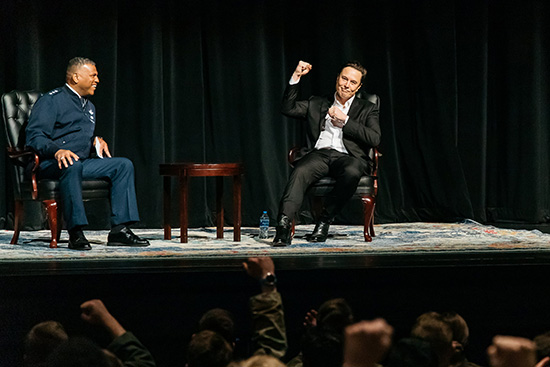 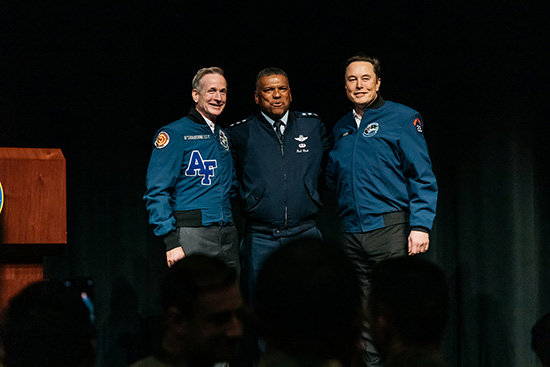