Learning lessons from recent war commanders, sharing lunch with a Pulitzer Prize winner or having discussions with a former vice president — cadets have access to these experiences and more thanks to a wide range of guest lectures at the Academy.

“When blockbuster-caliber speakers speak on topics cadets know about, it inspires cadets to think, ‘I am part of this conversation.’ They leave more inspired,” says Lt. Col. John Clune ’95, assistant professor of history. The Department of History coordinates the annual Harmon Memorial Lectures in Military History.

Inspiration is only one byproduct of attending such lectures. Speakers provoke, question and educate while telling their stories or outlining their positions. It’s all part of the educational experience of future Air Force officers.

“Speakers are here to offer cadets a different perspective,” says Brig. Gen. Andy Armacost, dean of the faculty. “Provocation is a good thing. Cadets need to hear alternate perspectives. Sometimes these speakers lead to follow-on events or extra discussions in the classroom.”

There is no shortage of options for cadets to explore. Four academic departments coordinate and host various endowed lectures each year to broaden cadet perspectives and to introduce new ideas and concepts.

Cadets also plan and attend the National Character and Leadership Symposium each February, which brings together thought leaders for two days of discussion, reflection and presentations.

The Profession of Arms Speaker Series, coordinated through the Center for Character and Leadership Development, ties leadership lessons to the military careers cadets will enter after graduation.

On a smaller scale, individual departments also invite guest lecturers to share their expertise and viewpoints.

The unique focus of the Air Force Academy creates the opportunity for very targeted lectures. Whereas a civilian college may highlight any author, the Academy focuses on war, literature and the arts. Another institution’s history department may highlight a time period or civil rights, while the Academy homes in on many aspects of military history.

“These speakers can tie up loose ends from class discussions and put an exclamation point to the lessons,” says Col. James Cook, permanent professor and head of the Department of Philosophy. The department offers two lectures each year: Joseph A. Reich, Sr., Distinguished Lecture on War, Morality and the Military Profession and the Alice McDermott Memorial Lecture in Applied Ethics.

These speakers can tie up loose ends from class discussions and put an exclamation point to the lessons.

“We invite not only scholars and policymakers but also operators right out of the theater,” Cook says. “We were able to bring then-Col. H.R. McMaster to the Academy just after he had commanded a regiment in Iraq, and he brought some of his officers from the field. He was able to tell cadets what day-to-day operations looked like, and the cadets got to talk about tactical, operational and strategic concerns.”

The David L. Jannetta Distinguished Lecture in War, Literature and the Arts provides a different perspective for cadets to consider. Since 2008, the lecture has focused on authors and artists who have contributed to a better understanding of the human aspects of war. Authors Tobias Wolff, Roxana Robinson, Ben Fountain and Sara Novic have all provided unique accounts.

“Cadets had to wrestle with the concept of PTSD [Post Traumatic Stress Disorder] after hearing Roxana Robinson, author of Sparta,” says Col. Kathleen Harrington ’84, permanent professor and head of the Department of English and Fine Arts. “When Sara Novic — a highly talented author who also happens to be deaf — spoke, cadets listened. They identified with her youth, energy and work ethic. She also brought a new war to them, the Croatian War of Independence. And her talk spurred a summer research opportunity to take cadets to the places outlined in her novel.”

The lectures can change the Academy in other ways as well. Col. Cheryl Kearney, permanent professor and head of the Department of Political Science, credits a 2014 Ira C. Eaker Distinguished Lecture on National Defense Policy with helping establish the nuclear weapons and strategy minor at the Academy.

“Maj. Gen. Garrett Harencak spoke about nuclear weapons when he was the Air Force assistant chief of staff for strategic deterrence and nuclear integration,” Kearney says. “After that, the cadets were interested in a nuclear minor, and we created a nuclear policy class. There was a groundswell of interest in strategic deterrence; his lecture reinvigorated that part of our curriculum.”

We can gauge the success of a speaker by the length of the line of cadets waiting to ask questions afterward.

The lectures become part of the curriculum of specific classes. Cadets are required to read about the subject matter to be discussed. They are invited to initial discussions. Then, after a lecture, they are able to meet the speaker and ask additional questions.

“We can gauge the success of a speaker by the length of the line of cadets waiting to ask questions afterward,” Harrington says.

Brig. Gen. Armacost and the lecture organizers all agree the lectures benefit the Academy as much as they benefit the cadets. Each has become an important way for scholars to share knowledge in a specific discipline. With increased capabilities to store and share the lectures, even more eyes will be on the Academy and its programming.

“World-class institutions have world-class speaker series,” Armacost says. “Sometimes cadets have an emotional reaction when they hear something controversial. But then they have a chance to engage their peers and their professors on that topic. The lectures are an important aspect in cadet education and development.”

Most of the established lectures have been supported by endowments or annual gifts. Gifts to any of the funds that support these lectures help pay for speaker fees and travel as well as opportunities for one-to-one interaction with cadets. 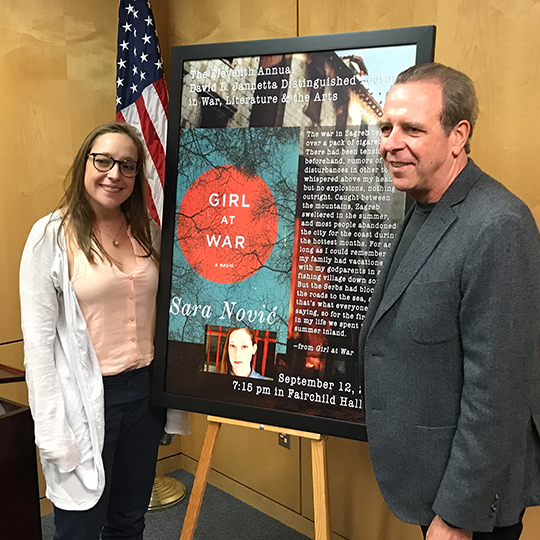 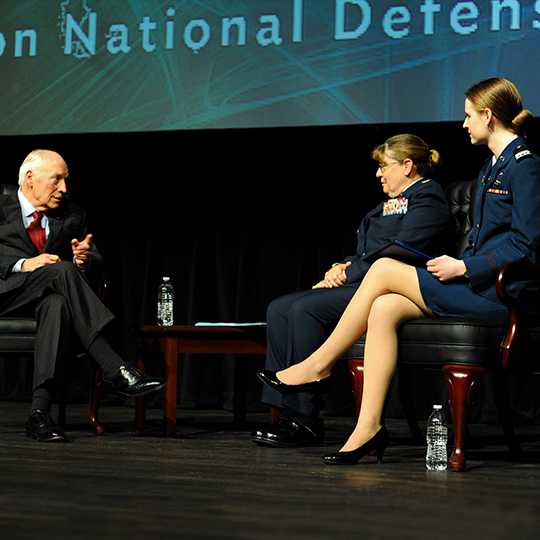