A team of USAFA Class of 1981 classmates — dubbed the Band of Brothers — successfully (virtually) completed the 2020 Marine Corp Marathon on Oct. 25, 2020, at the Washington & Old Dominion Trail in Ashburn, Virginia.

“During our four years at the Air Force Academy, from 1977 to 1981, we learned the lessons of leadership, teamwork and believing in something bigger than ourselves” says Col. (Ret.) Eric Garvin. “We put those lessons into practice as we went about to complete the 2020 MCM Challenge. This reinforces our class motto — ’81 Second to None.”

When it came to virtual race day, McKnight and Berkebile completed the marathon in under four hours.

“Which is impressive for any 61-year-old person,” Garvin reports.

“Despite being cold and exhausted, I finished the race thanks to my brothers who refused to forsake me,” Garvin jokes. Tim Hawes owes me because he used to beat me up all the time when he and I were boxing sparring mates in 1981, the year 4th Squadron won the Wing Boxing Championship.

The team helped raise over $60,000 for Cross World Africa, the nonprofit for which Garvin is the Executive Director. The donations came from donors throughout the country, USAFA Alum, from Centauri Corp locally and from two employees from American Airlines. The USAFA 81 Band of Brothers was responsible for raising nearly 90% of the over $60,000 raised.

Cross World Africa is dedicated to making hope a reality for impoverished communities across Kenya, Africa, specifically in Nairobi and the Rift Valley region. To achieve its mission of supporting community development in urban and rural Kenya, CWA focuses on building human capacity that enables individuals to be self-sustaining, so they can break the cycle of poverty.  CWA’s begins with a core belief that the only way to overcome inequality is through opportunity.  They provide the opportunity to with projects in three broad categories…entrepreneurship, education and health. https://www.crossworldafrica.org

During our four years at the Air Force Academy, from 1977 to 1981, we learned the lessons of leadership, teamwork and believing in something bigger than ourselves. 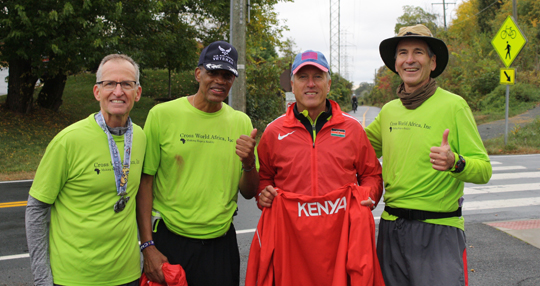