Orbis transforms lives by delivering the skills, resources and knowledge needed to deliver accessible quality eye care. They have been a pioneer in the prevention and treatment of avoidable blindness for nearly four decades.

The March 2020 issue of Checkpoints magazine featured his story:

A Flight for Sore Eyes

It’s the closing weeks of 2019, and dozens of men and women from Ghana have a new lease on life in the new year, thanks to Orbis International’s one-of-a-kind Flying Eye Hospital.

The converted MD-10 aircraft and its staff have flown into the African nation for 18 days of surgery, post-operative treatment and training of local eye care teams. Medical experts volunteering with Orbis will screen and schedule a long list of patients who are in desperate need of care, then perform the procedures that will restore sight to the blind and visually impaired.

For one Ghanaian mother, Mary, the Orbis visit means that a dense cataract will finally be removed from her left eye and she will once again have clear vision.

The success story is by no means unexpected — it’s a scene that plays out regularly on board this impressive eye hospital with wings. In any given year, tens of thousands of visually impaired patients throughout dozens of countries will have their sight restored through the varied programs of Orbis.

“The transformative effect of a 20-minute surgery that restores somebody’s vision is something that will grab you by the heart and never let go,” admits Brig. Gen. (Ret.) Bob Ranck ’82, president and CEO of Orbis International for the past four years. “This has been the most rewarding job I’ve ever had. It’s an experience that will stay with me forever.”

In mid-December, Checkpoints catches up with Ranck in Victorville, California, where Orbis’s Flying Eye Hospital arrives for its annual maintenance check.

Ranck is anxious to share the story of Orbis — founded in the late 1970s by renowned ophthalmologist David Paton, who recognized a need for better training for eye care professionals in less developed parts of the world.

“He decided the best way to get people training was to take the training to them,” Ranck explains. “It was too expensive to put people on airplanes, bring them here, house them and try to get them the training in the U.S. So, he decided to put a hospital on an airplane.”

Since those humble beginnings, Orbis International has steadily grown into a healthy nonprofit with an annual budget of about $250 million.

The organization touts a cadre of more than 400 medical volunteers from more than 30 different countries. Known as volunteer faculty, these experts share their skills with local eye care teams worldwide, improving the level of eye care they can provide in their communities for years to come.

About two dozen of these volunteers accompany the Orbis airplane on each trip.

“They all come together like a mini-United Nations to work together,” Ranck smiles.

A total of 18 FedEx pilots make up the volunteer cadre who fly the MD-10 to each Orbis destination. In fact, the current airplane was donated to the nonprofit by the people of FedEx.

“I’m involved with some of the biggest-hearted people that I’ve ever met in my life,” Ranck suggests.

When the Flying Eye Hospital lands in a country, it typically remains for two to three weeks. During that time, four to eight complex eye surgeries or procedures are completed daily inside the hospital’s operating suite, as well as at the local partner hospital.

The entire surgical process is captured on video and broadcast to a large screen in the 46-seat classroom inside the airplane, where local medical personnel from the host country are invited to watch the procedures so they can learn the up-to-date skills necessary to treat blindness and vision impairment on their own.

The plane is also outfitted with the latest simulation training technology, donated by Orbis corporate partner Collins Aerospace, allowing local teams to build hands-on surgical experience in a risk-free environment before they work on an actual patient.

But not every Orbis program is accomplished directly on the airplane.

“The Flying Eye Hospital is just one cog in the whole system,” Ranck says. “It’s only about 20 percent of what we do.”

The volunteer surgeons, nurses, biomedical technicians, anesthesiologists and others travel to local hospitals to provide face-to-face instruction onsite. In a handful of countries, Orbis supports permanent offices and clinics to further expand the nonprofit’s impact on eye care.

In addition, Orbis hosts a telemedicine platform — Cybersight — that provides online training for medical professionals dealing with blindness or vision impairment in every corner of the world.

“In a given year, we may reach a handful countries with the Flying Eye Hospital,” he reports. “With Cybersight, we can reach 165 countries. People log in to learn from places like Syria, Iraq or Afghanistan … where we could never take the airplane because we can’t put people into conflict zones. But those docs can still reach out to us and learn.”

Cybersight also is used by medical professionals working on particularly difficult cases, Ranck adds. Doctors and nurses can upload medical reports, images and notes to the site, asking for advice from volunteer experts around the world.

Another relatively new program is live surgical mentoring, where an eye care professional in a low- or middle-income country can interact with a volunteer faculty member while a surgery or procedure is actually taking place. The remote mentor is able to follow the progress via the internet and offer tips in real time.

“We’re a teach-a-man-to-fish operation,” Ranck explains. “There are some of our peer organizations that go in and do massive numbers of eye surgeries, and that has a place in helping people who are visually impaired. But the long-term solution is to build a system that can teach people to cure, prevent or treat these causes of blindness and make a permanent change in their society.”

The vast majority of maladies that Orbis volunteers deal with are easily treatable. Cataracts, glaucoma, trachoma and retinopathy are several of the typical eye diseases they tackle.

“There are at least 2.2 billion people in the world who are blind or visually impaired, and many don’t have to be,” Ranck reports. “In almost half these cases, the blindness and visual impairment is completely preventable, treatable or curable. That affects individuals, families, economies and communities. We’re trying to help them get out of the cycle of poverty and to make a lasting impact.”

“As the global population gets older, there are going to be more people who have the vision issues of aging,” he explains. “And as women outlive men, there will be more women with cataracts.”

“Diabetes is forecast to be a global epidemic in the near future,” he says. “That’s going to cause a lot of issues for blindness.”

Ranck’s involvement with the global eye care mission was definitely an unexpected career move for the former C-141 Starlifter pilot.

During his 30-year military career, Ranck completed several assignments at Andrews Air Force Base and several tours at the Pentagon.

But an assignment as commander of the 621st Contingency Response Wing at McGuire Air Force Base in New Jersey in 2005-06 was key to his future passion for assisting people in developing countries.

“That’s when I got my first taste of contingency response and disaster relief, helping people in need,” he says.

Following retirement from the Air Force, Ranck enjoyed brief civilian stints as vice president of business development at Integrated Systems Solutions and senior vice president of government programs and sales at Gulfstream Aerospace. Then one day, Ranck was contacted by a retired four-star general with a unique job opportunity.

“He said this charity was looking for a CEO and I think you’d be a good fit,” Ranck recalls. “I looked at the job description, I did my homework on Orbis, fell in love with the mission and jumped right in.”

Ranck comes by his passion for treating blindness and vision impairment honestly. As an Academy cadet, he had to secure a waiver to attend pilot training because of poor eyesight.

During active duty, Ranck had LASIK and photorefractive keratectomy (PRK) surgery on both eyes. Then later in life, he required several more complex surgeries on his left eye to maintain his vision.

When the opportunity to take on the CEO role for Orbis came up, Ranck immediately fell in love with the mission.

“I’ve been fighting vision issues my entire professional life,” he reports. “Being able to help people who have had similar fights was something that was really inspiring to me.”

Had he been born in a developing country, Ranck suggests he’d likely be legally blind in one eye and visually impaired in the other.

He decided the best way to get people trained was to take the training to them. It was too expensive to put people on airplanes, bring them here, house them and try to get them the training in the U.S. so he decided to put a hospital on an airplane. 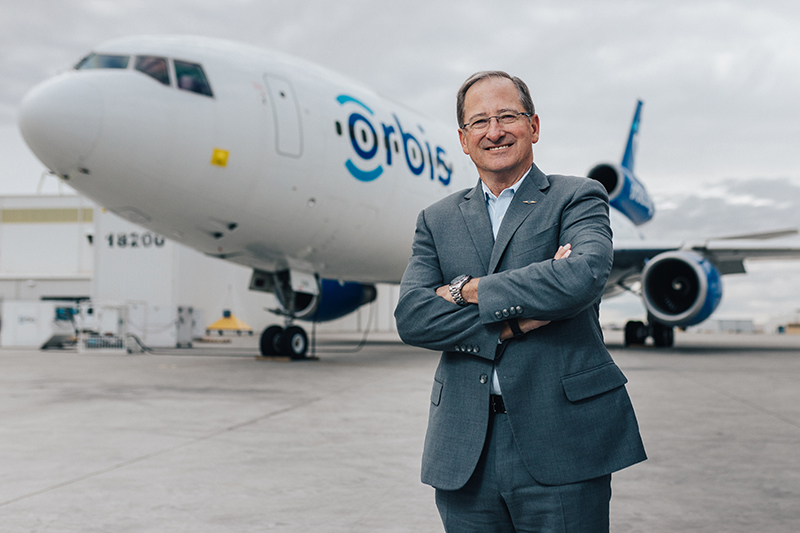 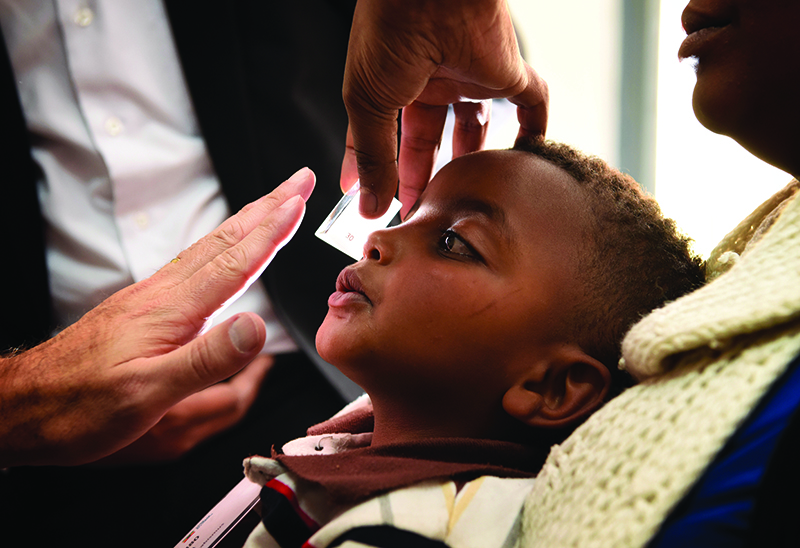 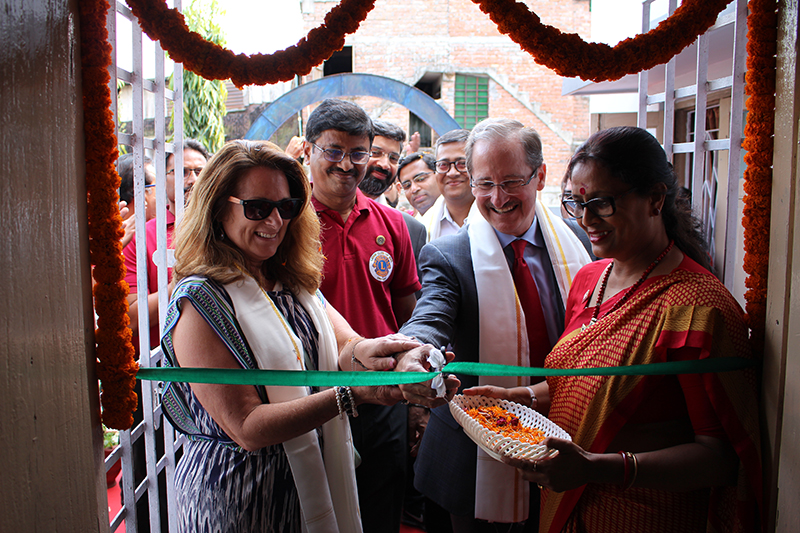 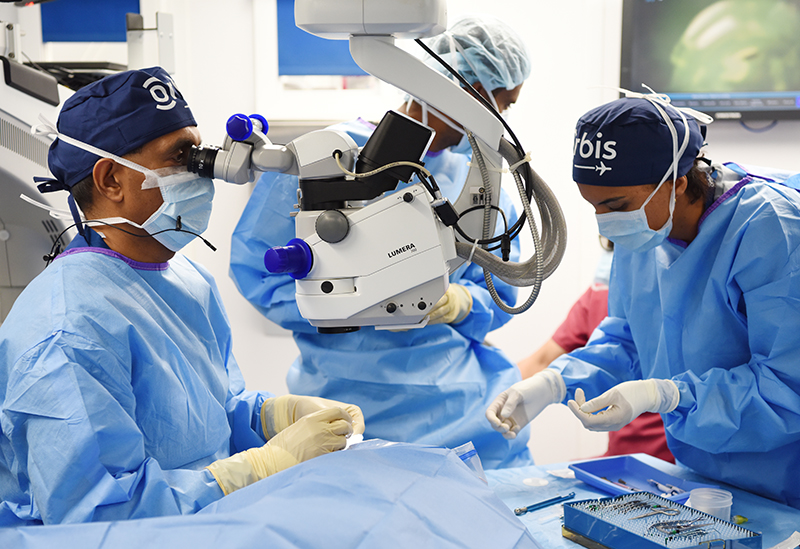 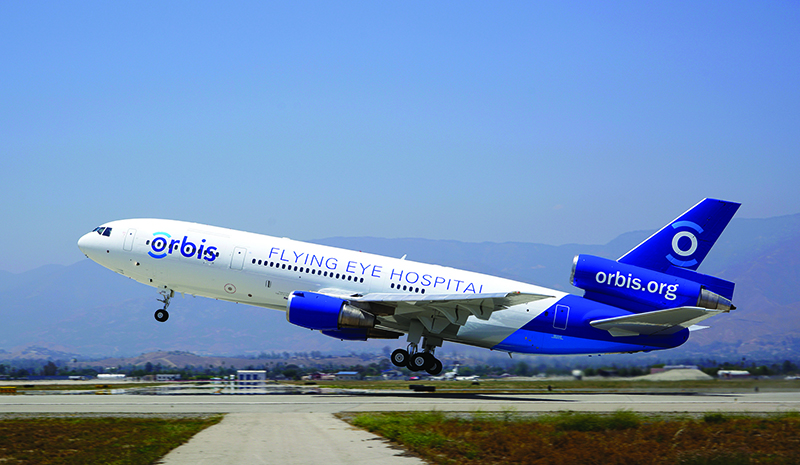 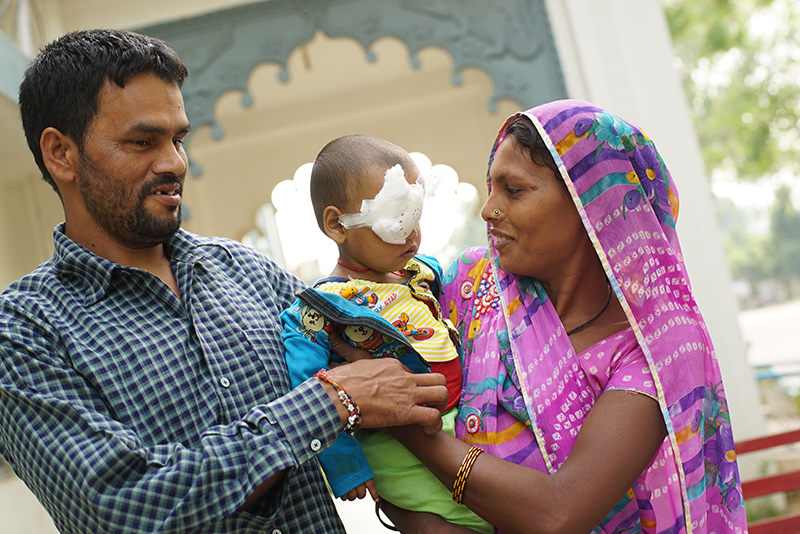