Vaccination Volunteers — A Shot in the Arm

A steady flow of USAFA cadets and permanent party make their way into the Cadet Fieldhouse on a foggy Thursday morning in April. Each individual eagerly arrives to receive the long-awaited COVID-19 vaccine that will help protect them from serious illness.

Once inside, a cadre of volunteers help shepherd the line of patients through the complicated process of checking in for an eventual shot. Few realize it, but hiding behind protective facemasks are retired astronauts, fighter pilots, general officers and defense contractors who are selflessly helping to run this mass vaccination clinic.

Some 15 volunteers — made up primarily of USAFA graduates and their spouses — are assigned to each four-hour vaccination shift. Their roles include assisting patients with medical forms, entering data into the computer system, directing foot traffic and monitoring individuals for 15 minutes following the shot. The volunteers are not, however, directly involved in the administration of the vaccines.

“What we try to do is basically lighten the burden for the 10th Medical Group folks, so that they can do their jobs,” explains Col. (Ret.) Mike Mosier ’73, today’s afternoon shift lead. “The Academy community is near and dear to our hearts, so we are happy to help out.”

According to former astronaut Lt. Gen. (Ret.) Susan Helms ’80, the Med Group is able to vaccinate more than twice as many patients with the help of volunteers.

“As far as I’m concerned, the more people who get the COVID vaccine in their arms, the better it is for everybody,” she says. “I’m here to help make that happen.”

Maj. Laura White, chief medical officer for the day’s clinic, says the dedicated volunteers are invaluable to the overall effort.

“I can’t even put it into words,” she reports. “They are incredibly helpful … making sure that these individuals get to us in a timely manner and in an unconfused manner.”

When vaccine doses started arriving at USAFA in January, only about 150 people per day were getting their shots.

Col. (Ret.) Bob Munson ’73, a regular volunteer physician with the 10th Medical Group, approached the Academy’s chief of immunology, Maj. Michelle Floyd, with an idea. Recruiting volunteers to handle the non-medical tasks of a mass clinic, he suggested, could speed up the process for shots and get cadets and staff members protected more quickly.

Munson reached out to several Class of 1973 classmates in the Colorado Springs area to find several volunteers. Then he asked the Rampart Chapter of the Association of Graduates for help to recruit even more local graduates and spouses. The chapter leaders came through in a big way.

“Two days later we had 140 volunteers,” he smiles. “Within two weeks, I had more than 220 volunteers. We were at war with an enemy – in this case the COVID virus — and they just wanted to help. They wanted to get in the fight.”

By springtime, the mass vaccination clinics at the Fieldhouse are held every Thursday for approximately six and a half hours.

On this particular day, volunteer Maj. Gen. (Ret.) Barb Faulkenberry ’82 expects about 1,200 shots will be delivered into the arms of patients. Each box of Pfizer vaccines contains approximately 1,200 doses, and once the vaccines are thawed from their frozen state, they have to be used quickly. (At the peak of the vaccination clinic output, as many as 1,409 shots were administered in one day.)

“We’re just here to help out the Long Blue Line and help our community get healthy with these vaccines,” Faulkenberry reports. “It makes me feel fantastic to know that I’m helping cadets, permanent party, retirees and dependents have a chance at a more full life by getting these vaccines. We know it’s the key to opening up the economy, getting to see loved ones and being able to travel.”

Col. (Ret.) Larry Strang ’74, point of distribution (P.O.D.) lead for the day, and his wife jumped at the chance to help the vaccine effort. His father-in-law was the former hospital commander at USAFA, so the Strangs understand the important role medical care plays in the lives of cadets and permanent party members.

“There are so many opportunities to serve after your Air Force career,” Strang says. “This was a chance for us to give back.”

An increasing number of cadets are in line on this particular Thursday, because USAFA Superintendent Lt. Gen. Richard Clark ’86 recently directed the 10th Med Group to begin focusing on the younger population.

“The cadets are coming up for their summer programs, and the seniors of course are graduating and going all over the world,” Munson explains. “We want them all vaccinated before they go out.”

As each shot is administered, most cadets are visibly thrilled to have received the Pfizer vaccine. A few flash a thumbs up and show off their right arms with the telltale Band-aid covering up the injection site.

“We hear a lot of thank yous, because they are relieved to get the vaccine,” Faulkenberry notes.

Service for a Lifetime

Strang notes that the volunteers fully understand their role in the grand scheme of things.

“We work for the 10th Med Group,” he emphasizes. “As volunteers, we make sure we’re in a support position all along.”

It’s been heartwarming for Munson to witness the volunteer effort behind the clinics. Not only are each of the volunteers committed to supporting the vaccination mission, he says, but they also come up with ideas to improve the efficiency and effectiveness of the clinics.

“The one thing about having graduates and spouses here is they’ve all been leaders,” Munson says. “Even though I started this out, the volunteers are now sharing in the leadership of the clinics.”

Munson adds that each volunteer has truly appreciated the chance to give back to the institution that means so much to them.

“These were graduates who were frustrated at being locked up for a year,” he admits. “They are just happy to help. Graduates from the Academy are taught and learn about a lifetime of service.”

These are graduates who were frustrated at being locked up for a year. They are just happy to help. Graduates from the Academy are taught and learn about a lifetime of service. 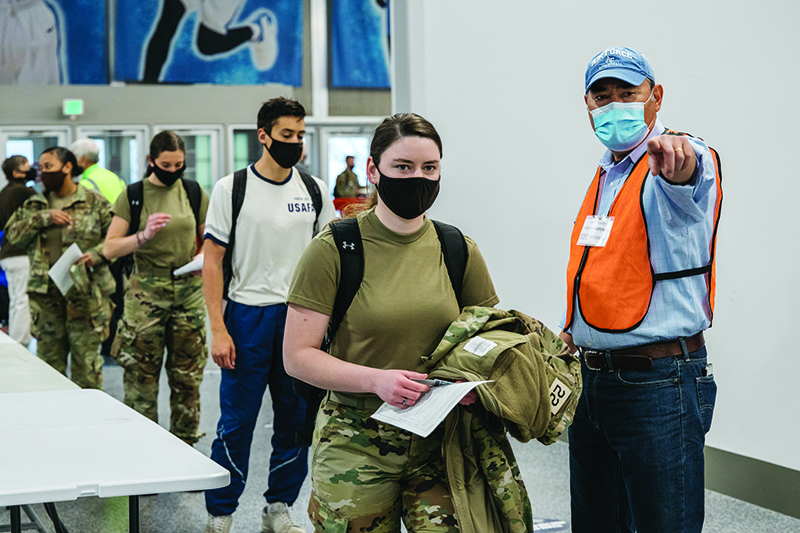 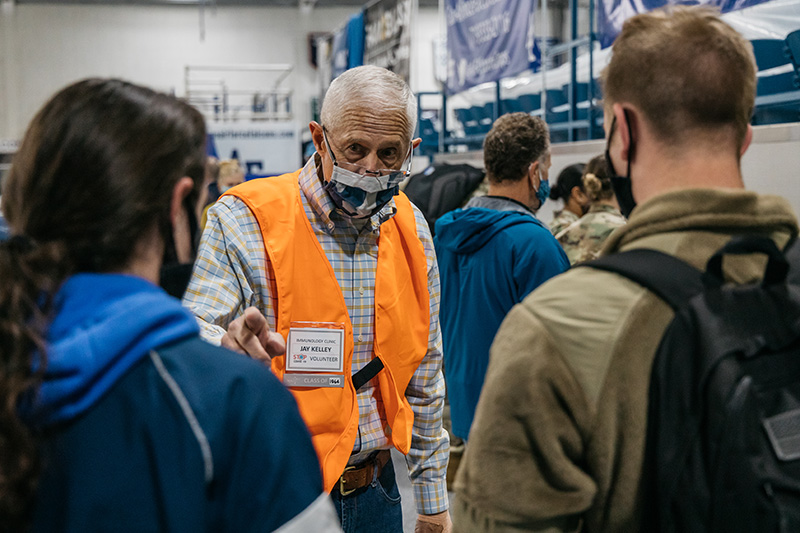 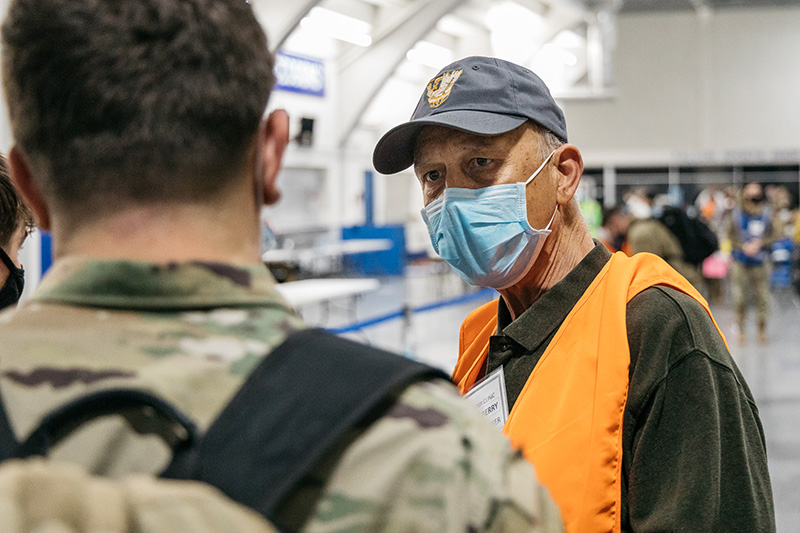 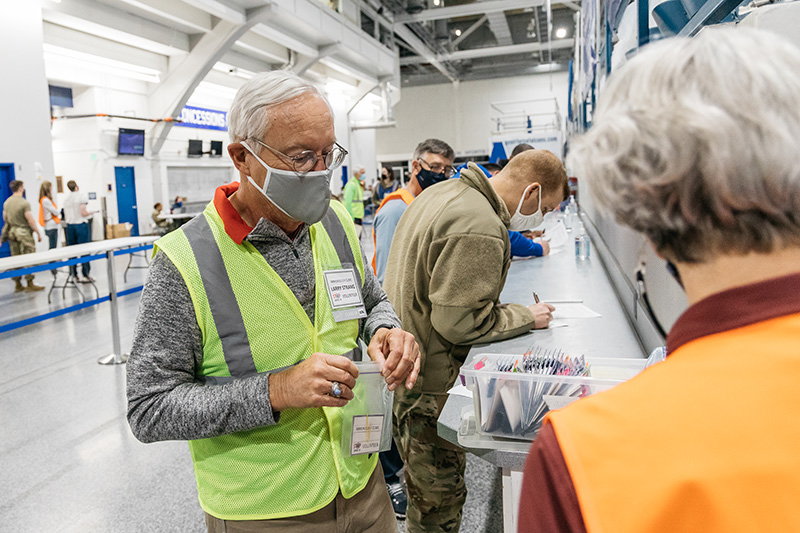 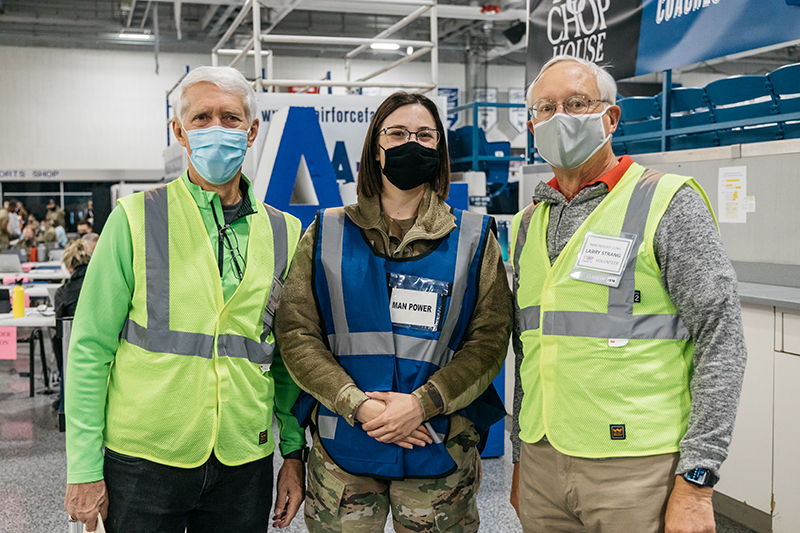 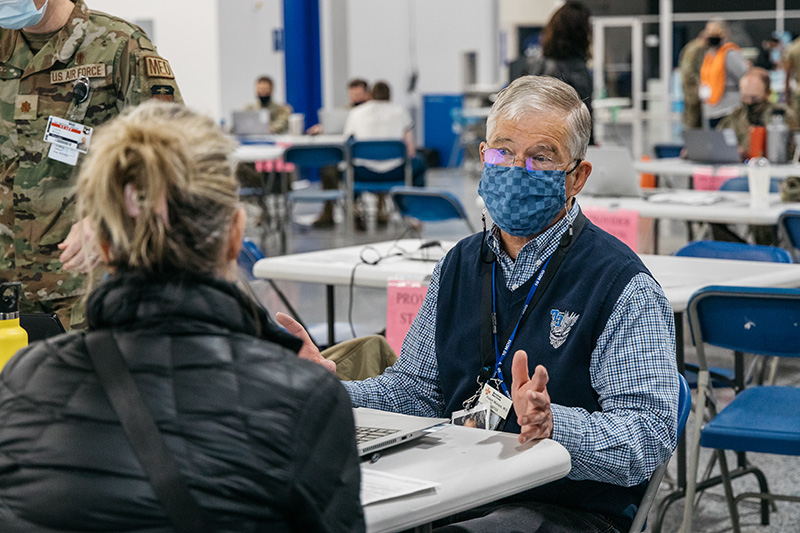 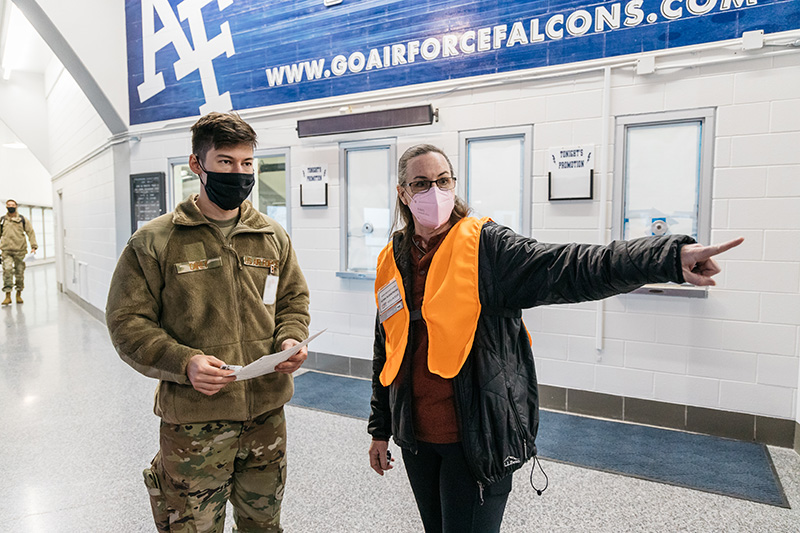 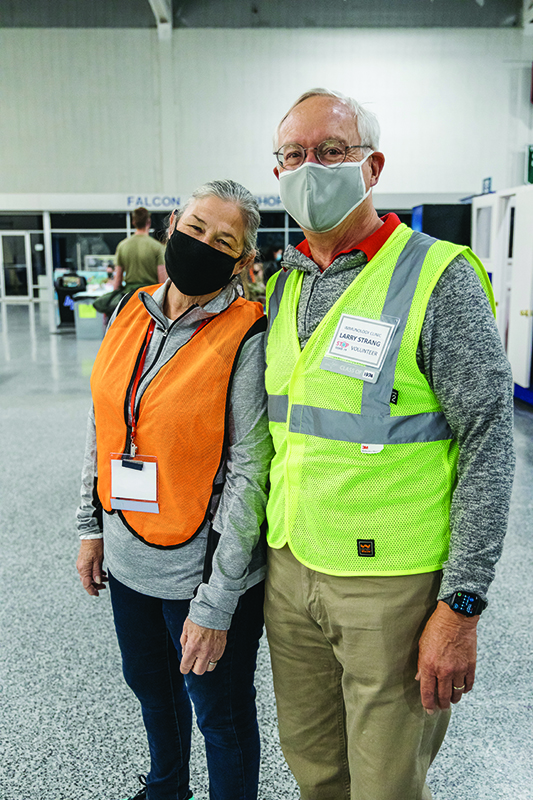 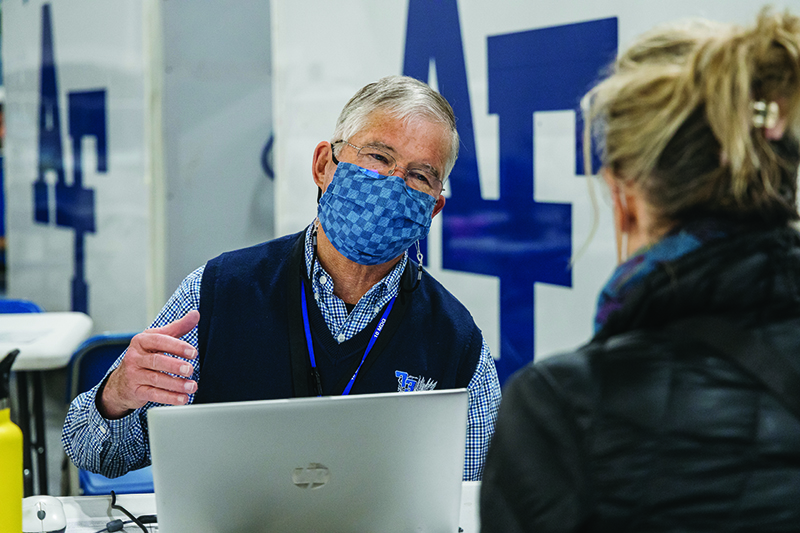 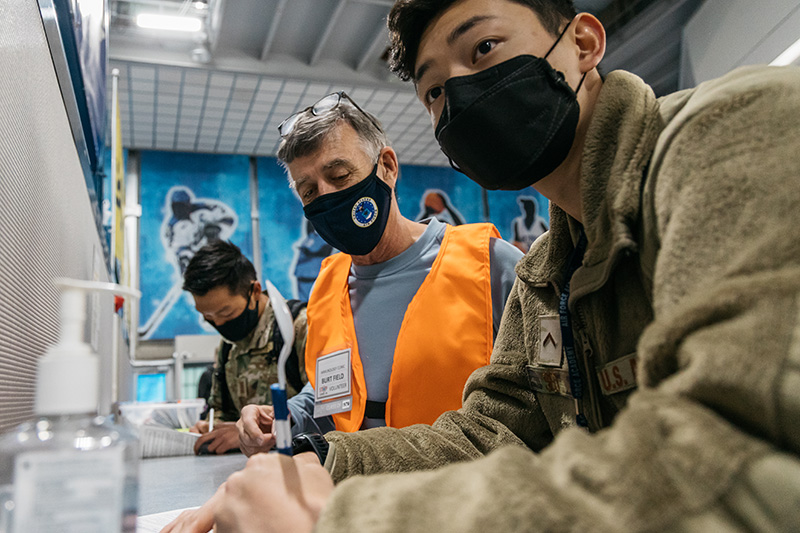 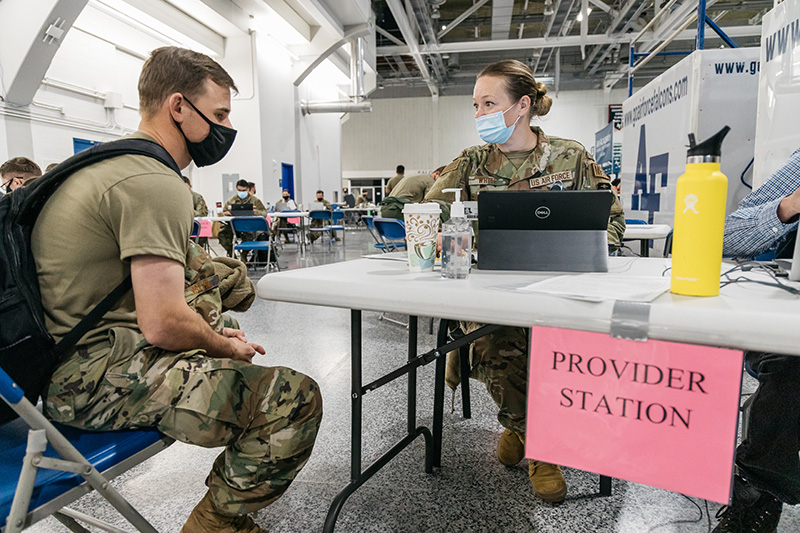 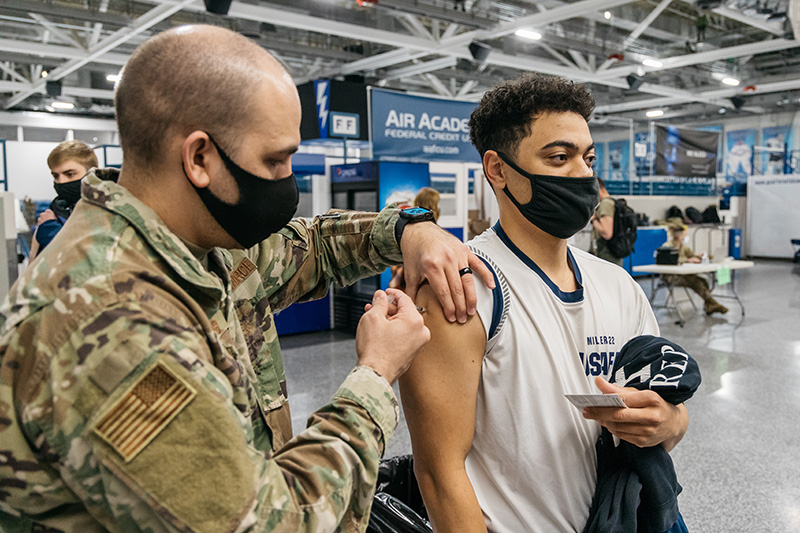