Father's Day is in June, and this month's AOG Service Spotlight appropriately shines on Kevin Divers '98 and his son Zach, a Class of 2021 cadet who returned home from the Academy during this pandemic. They have been manning the Tennessee state COVID-19 hotline and putting their shared sense of service before self into action to help others.

Here is what Kevin told us about the journey to service for him and his son:

I was a cadet in Civil Air Patrol as one of the original cadets at Tyndall Air Force Base in the mid-eighties while my dad (USMA ’65) was stationed there. Moved four more times before graduating high school in Southern California and attending the USAFA Prep School and USAFA (graduating in 1998).

Looking back on my experience as a military brat and CAP cadet I felt that CAP did the most for preparing to serve in the Air Force and definitely made the stress of the Academy less impactful as a lot of the military knowledge and performance expectations I had already been exposed to. Learning to goal set, to serve others, and definitely to not just do a job but to do the job with all I had were rooted in what I was exposed to in CAP from leaders and the cadet program itself. So it made it easy to do that as a Cadet Candidate and Cadet at USAFA. This carried over into what I did in the Air Force getting into Flight Test on the F-22 Developmental Test at Edwards AFB taking it to Operational Test while also instructing Human Factors for Cockpit and Avionics at the USAF Test Pilot School. My work with the high altitude qualification of the life support system of the F-22 led me to joining the Aerospace Physiology career field and becoming initial cadre of the first operational F-22 Squadron, the 27th Fighter Squadron, at Langley Air Force Base.

By this time I had been a single parent for Zach for a long time and I credit CAP to helping me learn the initial balancing act of prioritizing my responsibilities to handle work and home life. It probably gave Zach a unique upbringing as he attended roll calls at the Fighter Squadrons I was with, even being named by the 27th Fighter Squadron when he was given the callsign of Trashbin (for mini-Dumpster ... my callsign). I was waiting for him to get to age to introduce him to CAP. I had tried balancing CAP in while at Edwards AFB and had stayed a member for my Academy career and initial assignments in the Air Force but the operations tempo during all the training was too much to actually give to CAP. It wasn’t until I left the Air Force to focus more on providing stability for Zach and three moves later in a few years that he was old enough to join CAP. I was not sure of rejoining CAP but when he stated he had in interest in USAFA I knew that the best training ground for him would be CAP. So I took him to a few meetings and he said he wanted to join. The leadership of the squadron he joined asked me to join after learning of my previous involvement with CAP and within a couple of months we were both all in on CAP. I believe this is where Zach began to truly take on the core values of not just CAP but the Air Force.

Weekends were spent training or supporting for search and rescue / disaster relief missions, weeknights spend at the normal meeting and as he moved up in rank more weeknights spent preparing for meetings and taking care of the cadets he was assigned to supervise. He saw a lot of what I did to discipline him were similar to CAP and especially upon entering the Academy he learned that essentially he was raised in the fourth class system (it works for a single parent, brilliantly works) so adapting to CAP was pretty easy for him. Throughout his high school time he was working to lead cadet events, emergency services training, and being available on a moments notice to find emergency locator transmitters (ELTs) to include a 3 am search of the FedEx ground facility in Memphis to track down a shipped ELT that went off and the Air Force Rescue Coordination Center sent us out to find and shut off. He was exposed to an actual crash in which he saw that the mission was not always a clean and simple mission, sometimes it meant someone was severely injured or killed which I believe is where he started getting more into the medical aspect of serving to which he is now one of the cadets who helps instruct medical care in combat to his fellow cadets. He also was heavily involved with our unit Honor Guard in which he was able to lead the Honor Guard in the Presentation of the Colors for the 2016 National Hockey League All Star Game held in Nashville, Tennessee. He has presented the Colors at dozens of NHL Games, Monster Truck Shows, Rodeos, AF Academy Alumni events, All Academy Balls, and Wounded Warrior events in Nashville. He learned to selflessly give his time to the community, state, and nation in which he participated in a Foreign Cadet Exchange where he represented CAP by going on a multi-week trip to Canada to learn their cadet program and learn about their Armed Services.

Under the current situation he hit the ground running upon being sent home with the other cadets in March. He was ready for more challenge and took on the role of Deputy Commander for Cadets in our squadron and helped transition our training from in-person to virtual meetings. He has continued to motivate the cadet staff to look after one another and kept our cadets on track with their promotions as well as mentoring the cadets who are interested in applying to the Air Force Academy themselves. He has been part of the disaster relief effort volunteering time to the Tennessee State COVID-19 Call Center assisting residents of the entire state to get the help or answers they need to get through this event. He also supported the Salvation Army in delivery of food to the homeless camps around Nashville as part of the relief effort. He took the time to create a forum for the Middle Tennessee cadets now home to make sure they could check in on each other and support one another. He has also helped the Middle Tennessee AF Academy Parents Club with developing a list of mentoring cadets for the incoming Class of 2024 and is part of the planning committee for the send off of these cadets to make sure they leave informed, prepared, and ready.

What may have started off as some pushing in 2011 has matured into seeing Zach take on the Air Force’s Core Values and I am proud of what he has become as a young adult thanks to Civil Air Patrol and his own perseverance making it through more than 10 moves including living overseas in England and both coasts with assignments to California and Virginia. I was proud to see him work hard as a B Squadron Cadet Candidate just like I had in the 90s and then to see him now in Cadet Squadron 36, my graduate squadron, as an Honor Officer like I was I am proud to see him push himself and take what he has learned to bring success. It has not been all easy for him at the AF Academy, nor was it easy for me, but I think CAP taught us both how to persevere, to achieve, and most importantly to take care of others. I rejoined CAP to give back, and for what it did for him, I owe CAP that much more.

It has not been all easy for him at the AF Academy, nor was it easy for me, but I think the Civil Air Patrol taught us both how to persevere, to achieve, and most importantly to take care of others. 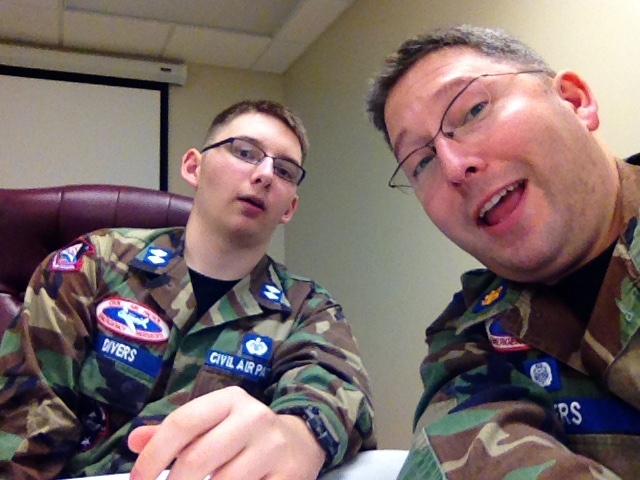 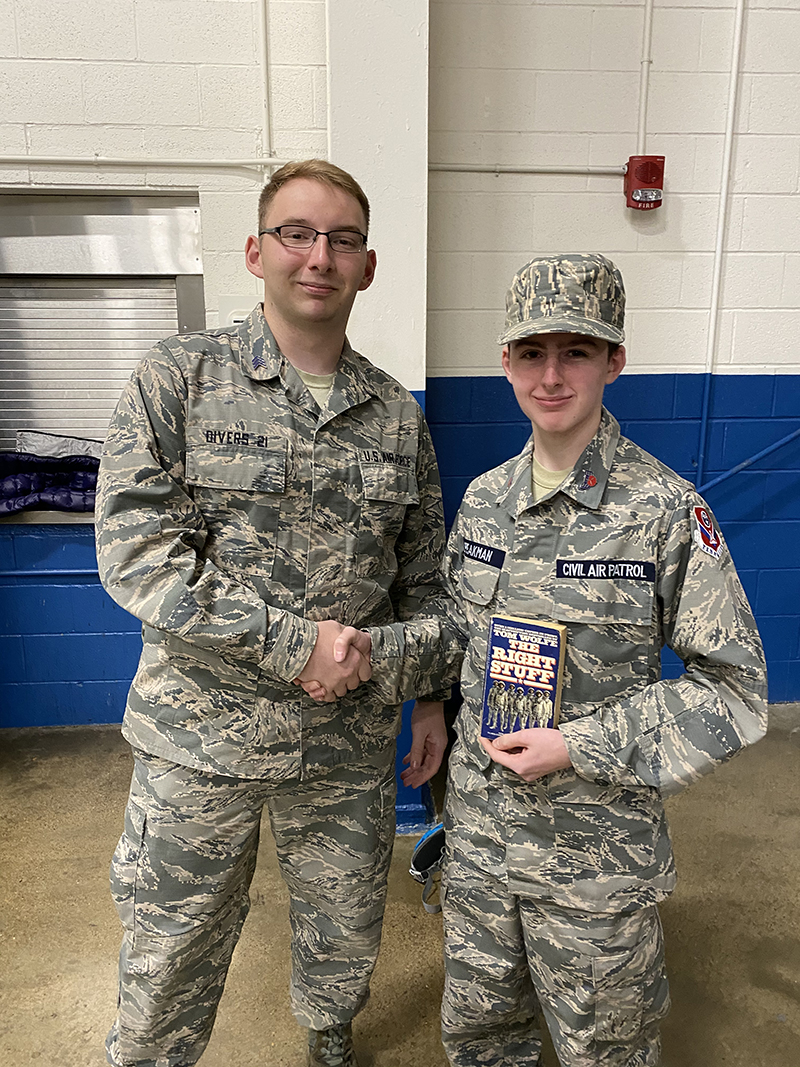 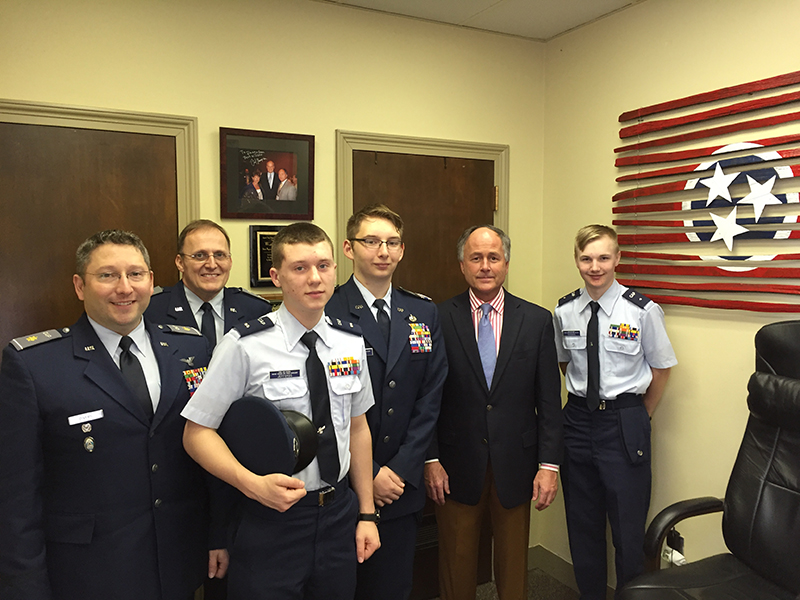 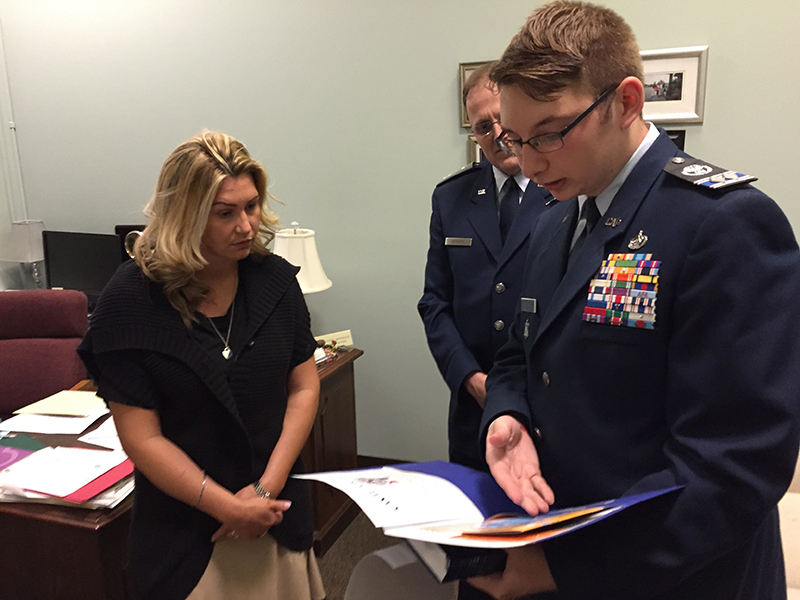 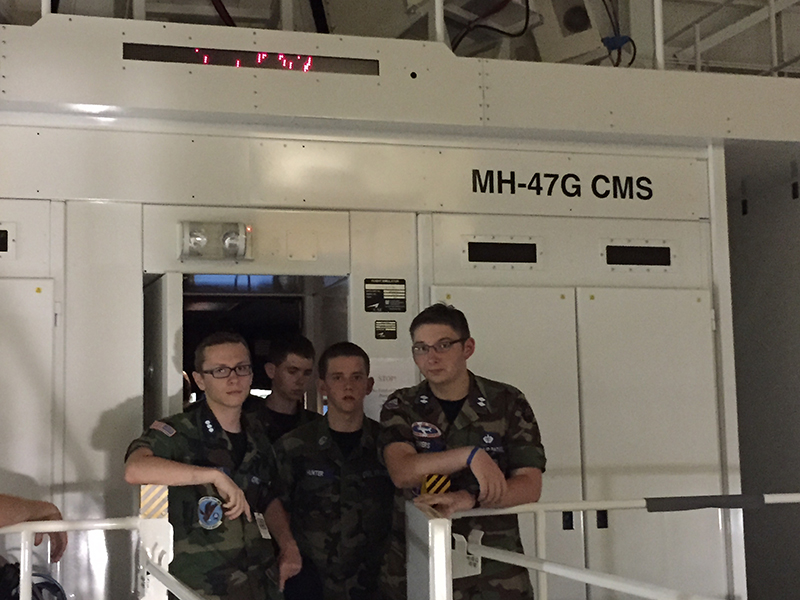 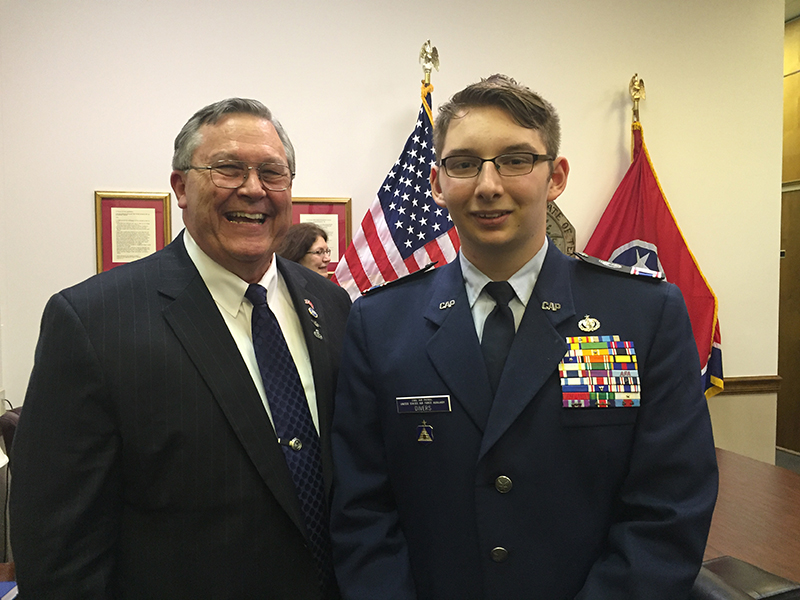 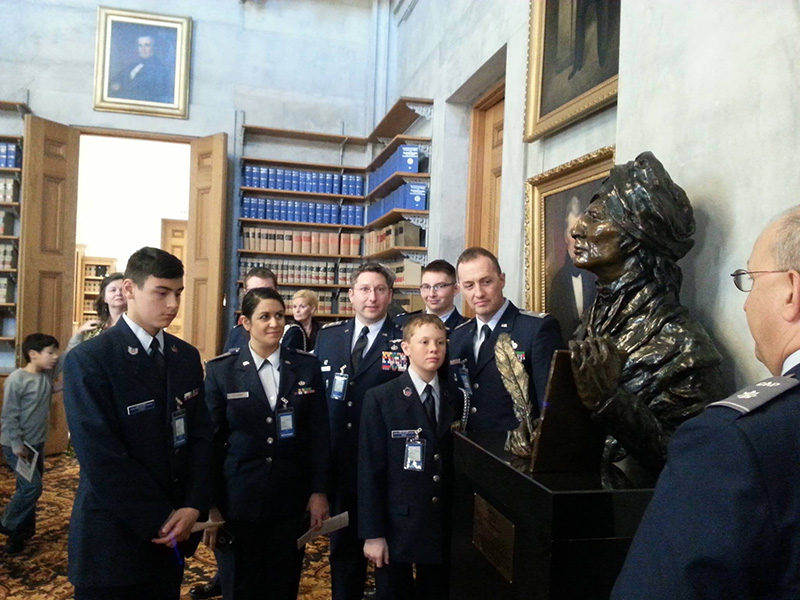 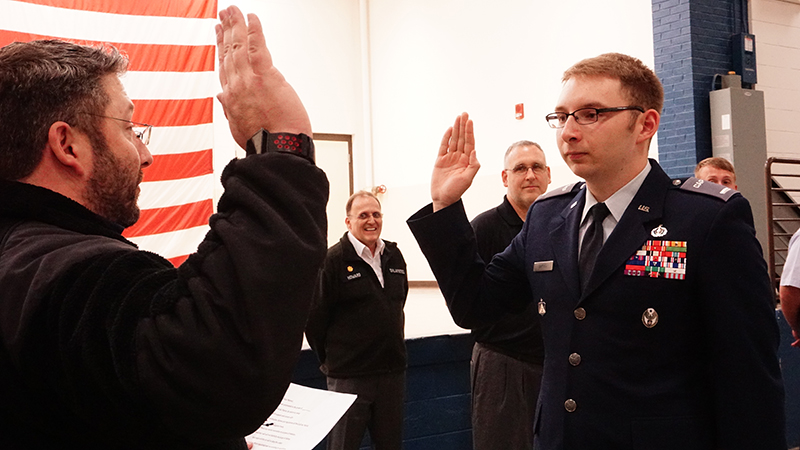 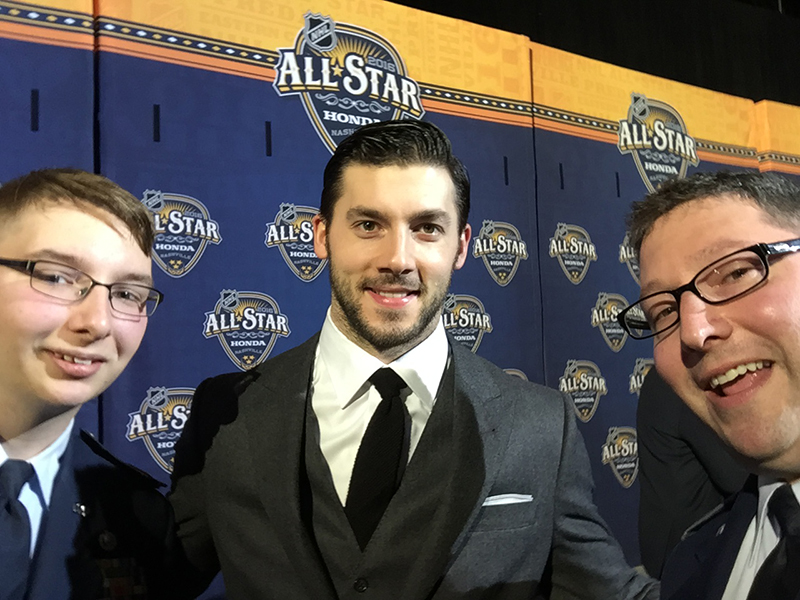 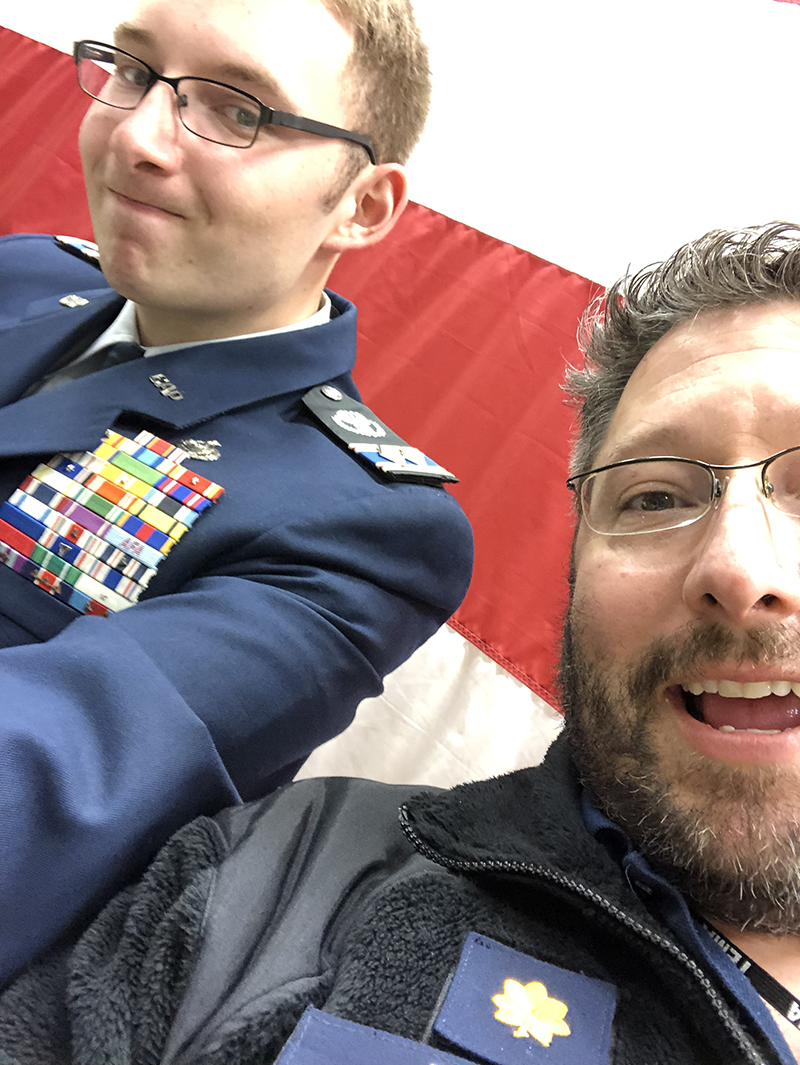 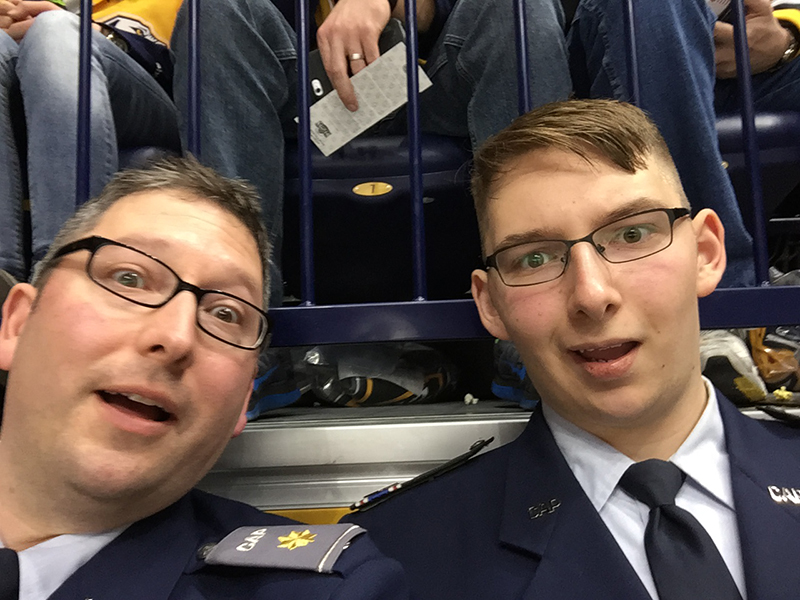