A winter storm is brewing as Col. (Ret.) Art Compton ’72 bundles up and heads out the door for his early morning shift. There’s no snow day or delay for volunteers at Montana Wild, a publicly funded wildlife rehabilitation facility in Helena.

No matter the weather, dozens of injured birds and wildlife still need to be fed and exercised.

“Their needs don’t take a day off,” he says. “Our birds and our bears are there whether it’s a holiday or a weekend … or even during a global pandemic. Our volunteers have the dedication required to get the job done.”

For more than three years, Compton has been one of those dedicated volunteers who care for animals injured throughout the state of Montana. The birds and mammals are transported here to recover.

When he arrives at the wildlife center at the edge of town, Compton spends his initial moments cleaning out the enclosures where the birds and mammals live. Then it’s feeding time, followed by exercise and handling practice for the ambassador birds.

“Not very glamorous work,” he admits.

Compton averages about 12 hours a week at Montana Wild and he loves it. His passion for wildlife rehabilitation and education makes perfect sense for someone who has been working with birds of prey for most of his life.

As an elementary-aged child, Compton discovered an injured hawk and took it home to nurse it back to health. He worked with a local veterinarian and read numerous falconry books to keep the bird alive and ultimately release it back into the wild.

That chance rehabilitation project turned into a lifelong avocation for Compton.

“I fell in with a network of local veterinarians in Illinois where I grew up, and the rest is history,” he says. “I was fortunate to work with birds of prey through junior high and high school.”

Compton secured his first falconry license from the state of Illinois in 1965. He would go on to work with and hunt with birds for many years.

“The objective with the birds I worked with as a boy and then as a young man were to eventually lose the bird while hunting its natural prey,” he notes. “Fortunately, falconers are very good at losing birds.”

“Funny, but my undergraduate institution happened to have a falconry program,” he laughs.

He was part of the Academy’s falconry team during his last three years, serving as cadet-in-charge of the program as a firstie.

During World War II, Compton’s father was a member of the Coastal Air Patrol, flying submarine patrol along the U.S. East Coast. The stories of his father’s exploits motivated Compton to become a pilot himself.

After graduating from USAFA, Compton completed pilot training at Columbus Air Force Base in Mississippi. He would stay at Columbus for three years as a first assignment instructor pilot (FAIP). During one particular summer vacation, Compton spent three weeks in Montana and was immediately drawn to the wide-open spaces.

In 1976, after completing his FAIP assignment, Compton was given his choice of jobs. He ended up at Malmstrom Air Force Base in Great Falls, Montana, and has lived in the state ever since.

“Despite my Midwest upbringing, I’m very much a Montana guy at this point,” he smiles. Compton had hoped to be flying the F-106 at Malmstrom, but the base switched over to the EB-57E Canberra just before he arrived. That assignment sent him all over the world — including Germany, Italy and Denmark — training North Atlantic Treaty Organization (NATO) fighters.

In addition to his civilian career, Compton joined the 120th Fighter Group with the Montana Air National Guard and flew the F-106 for about eight years, mainly pulling domestic air defense alert duty.

When he retired, Compton says he wanted to go back to his roots.

“The birds are pretty much my roots,” he suggests, “and I was fortunate to already live in Helena … where they have the only publicly funded wildlife rehabilitation facility that I’m aware of.”

“I’m working with the birds that are going to be rehabilitation candidates,” he says, “working behind the scenes on their health and their release.”

Birds and other animals on the road to recovery can spend as little as a few weeks, or as long as several months, rehabilitating at the wildlife center. In a typical year, about 100 birds and mammals receive care here after being shot, poisoned or injured in some other way.

“The rehab side of the program is very successful,” he reports.

Compton also works with the ambassador birds that will likely never be released due to serious injuries or behavioral issues. The ambassadors — which number 15 and include falcons, eagles, hawks and owls — are brought into the learning center on a regular basis to interact with the public. In addition, the birds and handlers travel to local schools and offer programs to community groups to further educate the public.

“We’re working with the birds face-to-face every day to train them so that they can serve as public outreach and education training aids,” he says. “They can help educate the Montana public or our out-of-state visitors on exactly what these birds mean, what they bring to our lives, how important they are, and the ecological niches they occupy in the wild.”

The public interaction is important, he says, so that support for Montana Wild programs continues.

“The birds provide a critical function … education,” he says. “Education leads to appreciation, which leads to support. Public and private wildlife initiatives don’t happen unless they’re driven by public sentiment.”

Compton is grateful for the chance he’s had to work with wildlife for so many years.

“Between the Academy and then here at Montana Wild, I’ve had great opportunities to continue something I’m passionate about,” he says.

He’s especially thankful for his fellow volunteers, the skilled veterinarians and the Montana Wild staff members who he works with on a weekly basis. He’s constantly amazed at the advanced rehabilitation techniques of today that allow for the successful release of birds and mammals back into the wild.

“There is a lot of expertise here to help injured wildlife,” he says. “We’re here to temporarily participate in the bird’s or animal’s life when they need some help and support.” When asked about his penchant for service before self, which is an important part of USAFA cadet core values, Compton admits he doesn’t consider his lifetime of service to be that selfless.

“Whether I’m flying fighters or working with birds, it doesn’t seem like a big sacrifice to me,” he shrugs. “I’ve been fortunate to be able to serve in areas that are a lot of fun. And I’m giving back to something I love.”

Whether I'm flying fighters or working with birds, it doesn't seem like a big sacrifice to me. I've been fortunate to be able to serve in areas that are a lot of fun. And I'm giving back to something I love. 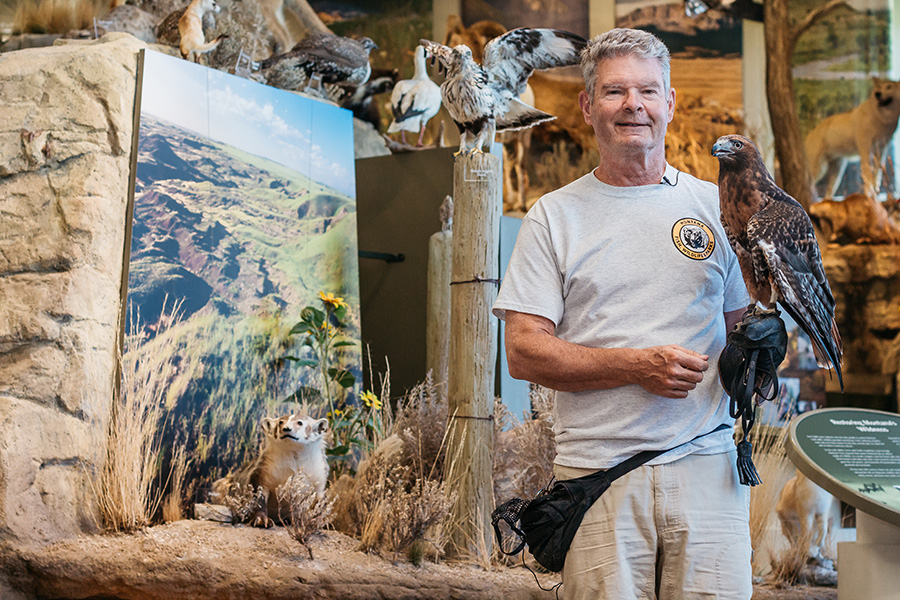 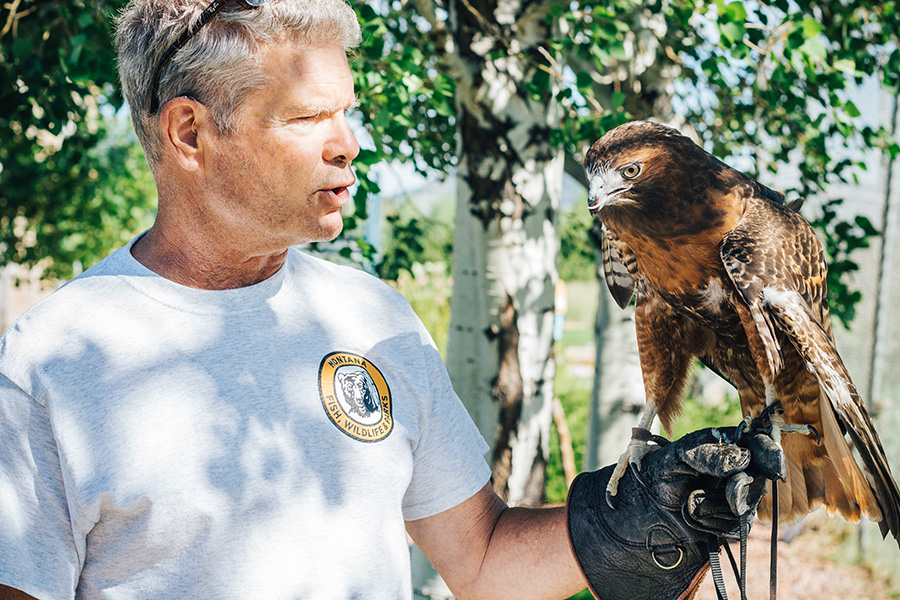 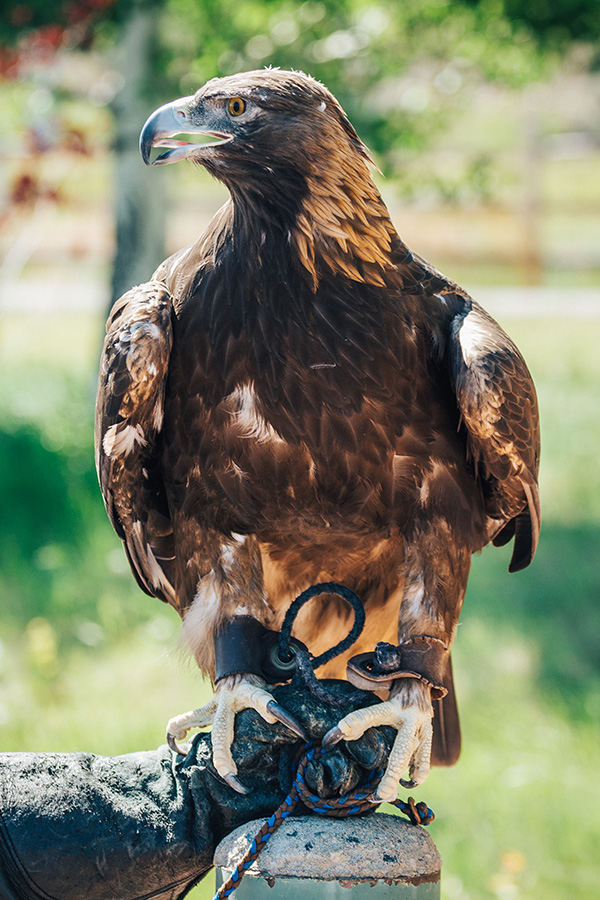 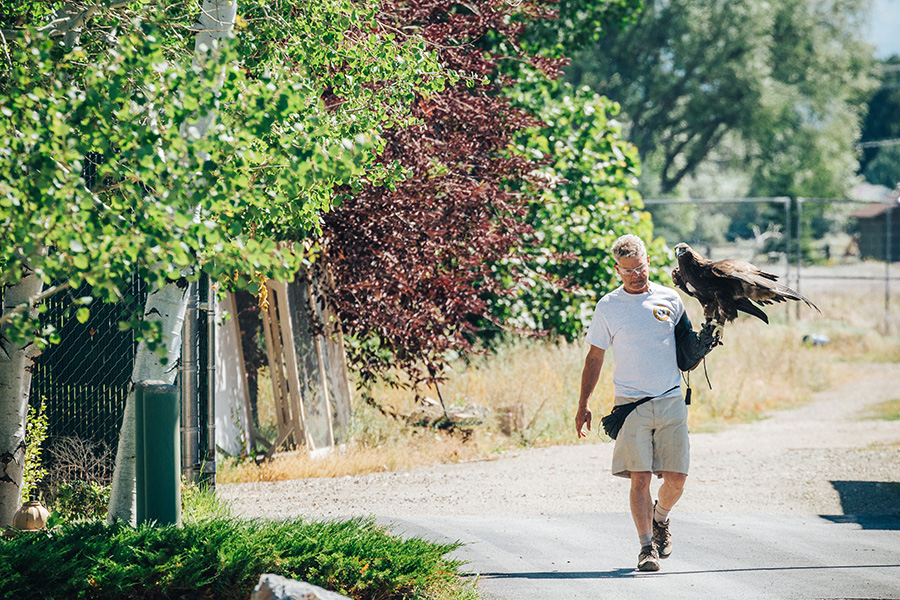 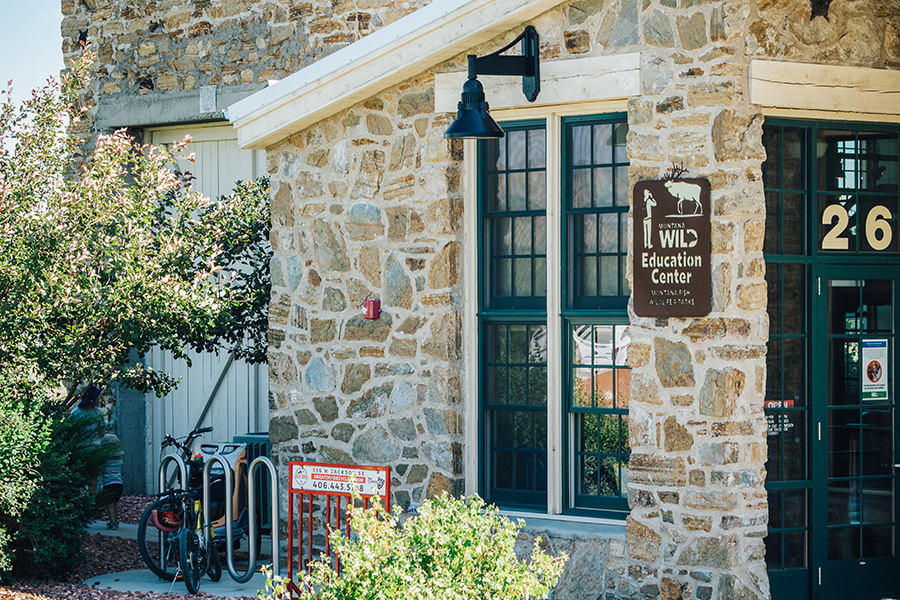 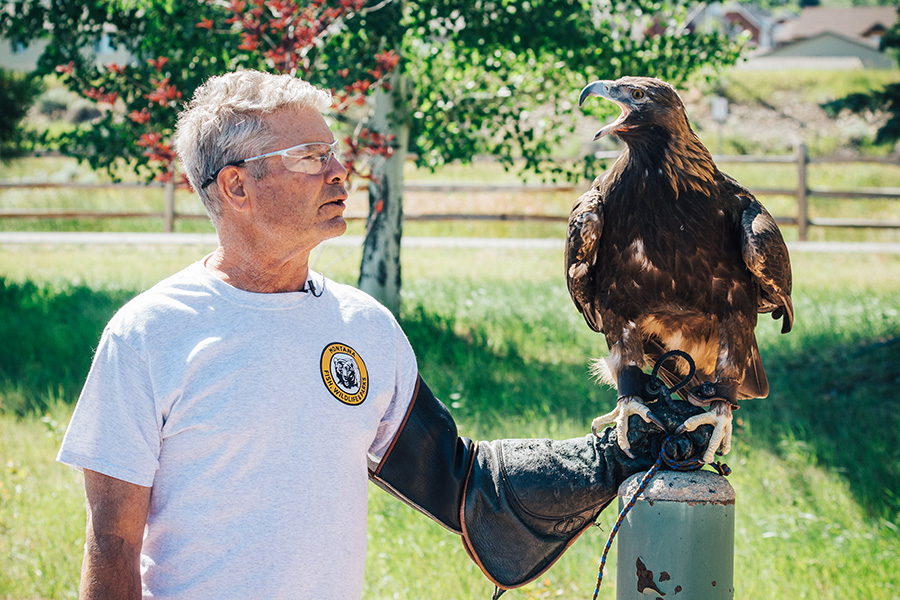 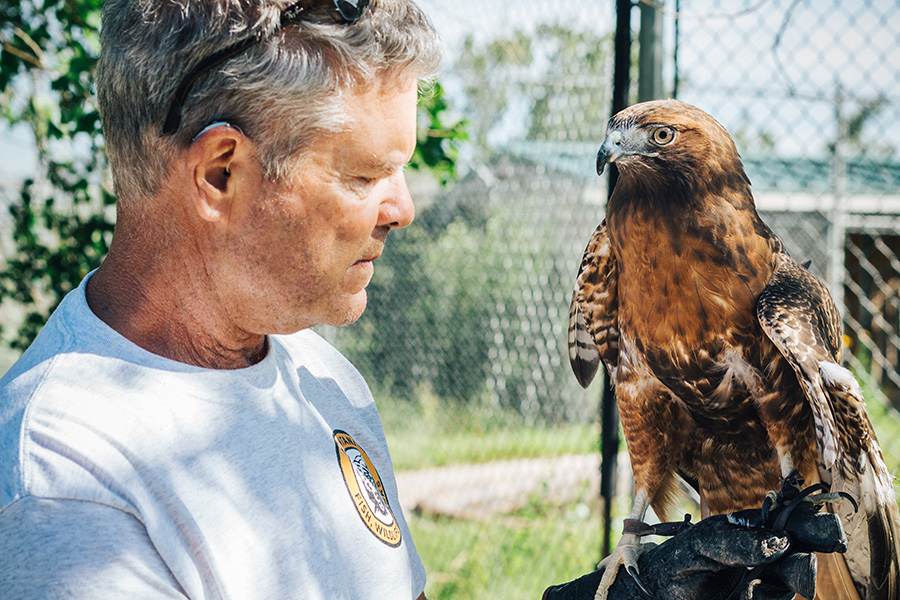