Just a third of the 199-mile relay race is complete and Don Rushing is reclining inside the Winded Warriors team van, trying to rest his aching muscles.

His left foot — taped and iced — is elevated against the dashboard. And yet, remarkably, Rushing has a wide grin etched across his face.

“This is raw meat for an Academy graduate,” he says of the remaining challenge that lies ahead. “This is perfect.”

Welcome to the 36th annual running of the Hood to Coast Relay in Portland, Oregon. The Aug. 24-25 fundraising event attracts an astounding 13,000 runners on 1,050 12-member teams. Athletes hail from all 50 states and 43 different countries.

The race — which starts at the foot of Mt. Hood and follows a rugged route to Seaside, Oregon, on the Pacific coast — is dubbed the “Mother of All Relays” and raises research funds for Providence Cancer Institute in Portland.

A new resident of the Pacific Northwest, Charles Black learned about the race and suddenly had a nutty idea. He’d just turned 70, along with most of his classmates, and they are coincidentally part of the Class of 1970. Plus it’s the 70th anniversary of the United States Air Force.

The grads also were part of the 12th graduating class from USAFA, and relay teams consist of 12 members. It was a sign, Black says, that his classmates might have one more physical accomplishment to achieve.

Black phoned his former law partner and classmate, Don Rushing, to bounce the idea off of him.

A few short weeks later, the Winded Warriors were born. Twelve classmates, plus several alternates, had committed to running the race.

“It’s got all of the features important to Academy grads,” Rushing explains. “It’s got camaraderie … getting a group of people together, some of whom we haven’t seen in 48 years. It’s got a good cause, because a lot of us have lost people to cancer. It’s fun and it’s challenging — it hits all the buttons.” 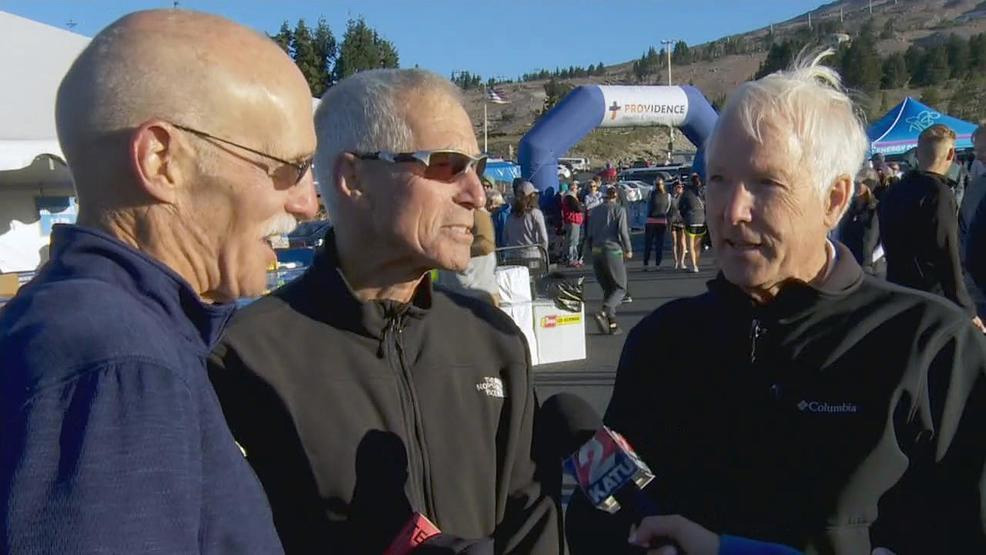 Turns out, several of the newly formed Winded Warriors were in fact experienced runners.

Grady Cash is a world- and American-record holder on the masters running circuit. He’s even written a book on the subject, “200 Tips Every Runner Should Know.”

“This was a great opportunity to show people that 70 is just a number,” Cash explains. “You need to work hard at staying young. We want to be a role model for healthy aging.”

Interestingly, in 1998, Cash was told he would never run again due to a painful injury. A few years later, he had run himself back into shape.

Mark Bean has kept himself in pretty good shape through the years and was intrigued by the idea of putting a relay team of classmates together.

“Although this is a lot of fun, I think we are taking it seriously too,” he says. “We are wanting to do our best so we do our class proud.”

John Stringfellow is a runner but had never run seven miles at one time. He was a little concerned how he would fare come race day, but he was confident he’d finish his assigned portions of the race.

“My wife is a fitness instructor,” he notes. “She trains me. She definitely whipped me into shape.”

Ted Coulson and his wife, Jeanne, had both run in the Hood to Coast Relay 20 years ago. Coulson was anxious to give it another try at the age of 70.

“But finding 12 classmates who had a good chance of finishing the race was a bit of a challenge,” he admits.

Russ McKnight gave up running about three years ago, but committed to being part of the team to “celebrate a life of running.”

“We all have butterflies in our tummies,” he says of the anticipation for race day, “but we’ve committed to getting the job done.”

Clark Nichols notes that it’s been 52 years since his class arrived at the Academy for Basic Cadet Training.

“I hadn’t run much at all in the past 20 years, but this gave me a chance to get back in shape and run with my friends,” he smiles. “Even though we are 70, we’re still going. The guys running here today ran together in Basic in the summer of 1966. And we’re still running together.”

Jim “Mulf” Mulford was one of the more inexperienced runners who joined the adventure.

“I hadn’t run in this century, so this was a bit of a daunting task,” he admits. “I decided to give it a shot, but every time I started to train I pulled a hamstring, a calf muscle or a groin muscle.”

Mulford switched to power walking instead and, thanks to help from an experienced coach, was able to remain healthy enough to compete.

B.J. Bjorklund hadn’t run much in the past two decades, but he was willing to give it a try as well.

“I’m not planning on setting any records,” he laughs. “I’m just going to take it nice and slow.”

The Winded Warriors don’t take the challenge lightly. The team vans are well-stocked with food, liquids, pain pills, rolling pins (to help massage out muscles), bandages and more. Gary Covington, a van driver and team alternate in case someone gets injured, is busy making sure his teammates are taken care of along the route.


The thing that we’re probably most satisfied about is the way that, unbeknownst to us, we were able to engage the Air Force Academy community and get people to help with the fund raising. Academy graduates were very, very generous and surpassed all of our expectations. 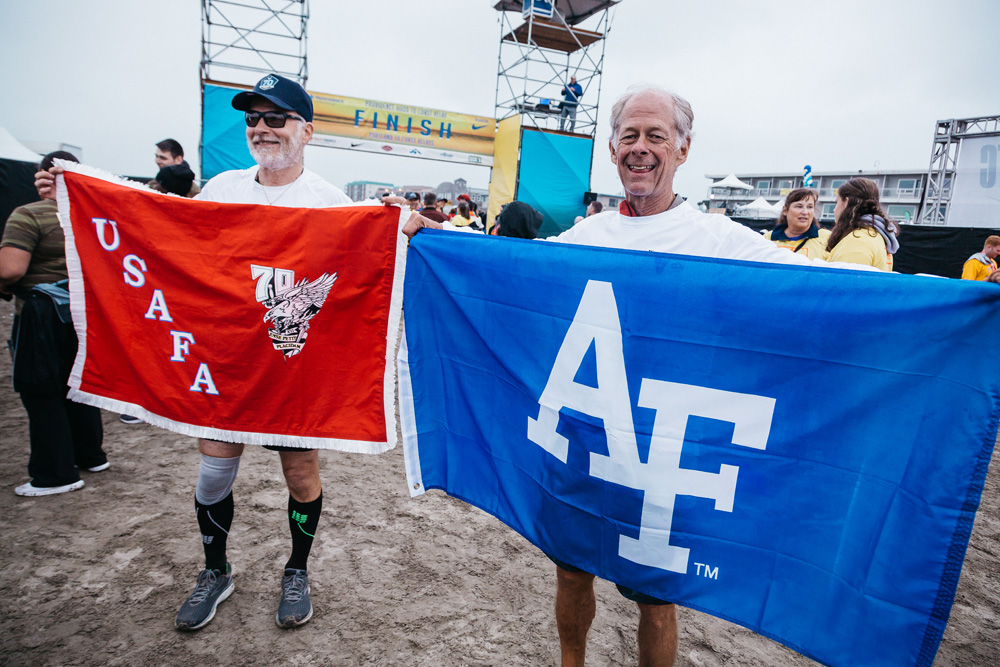 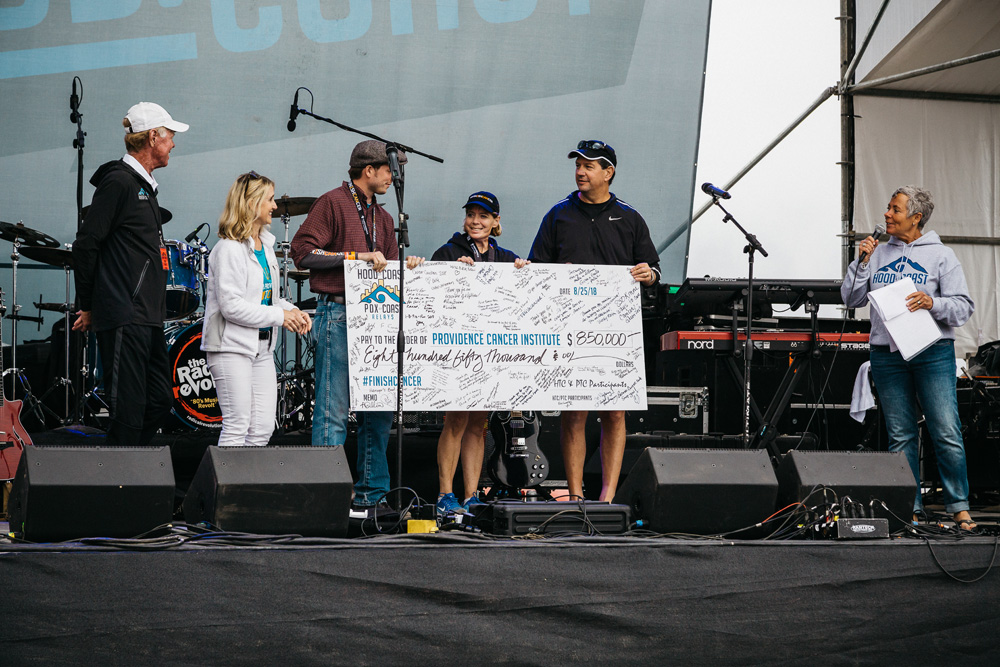 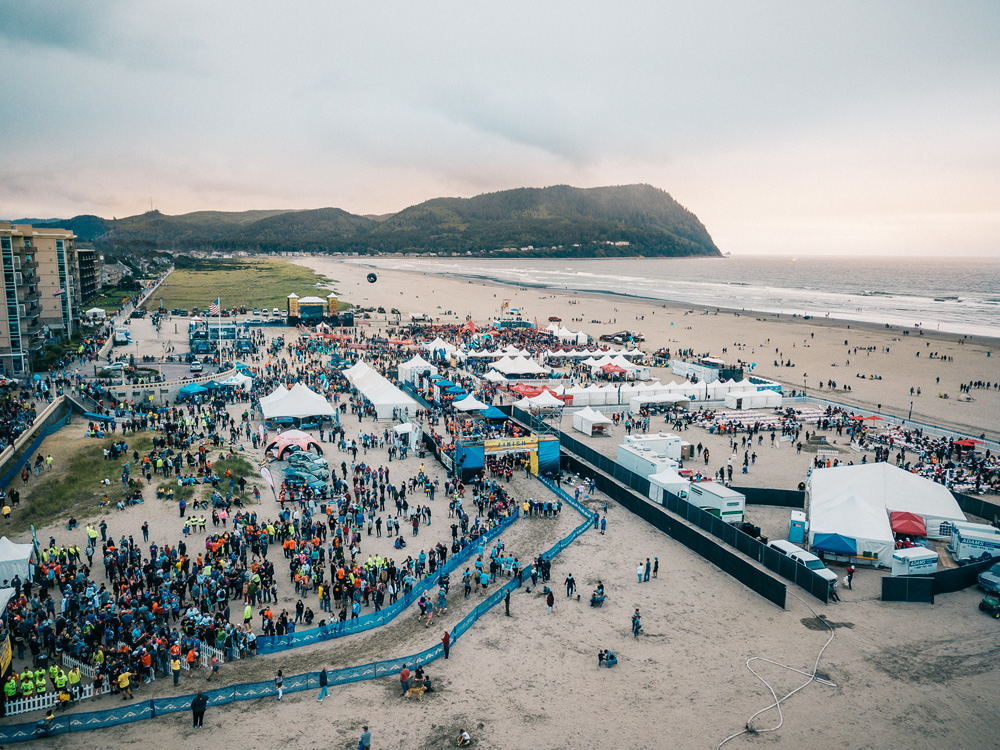 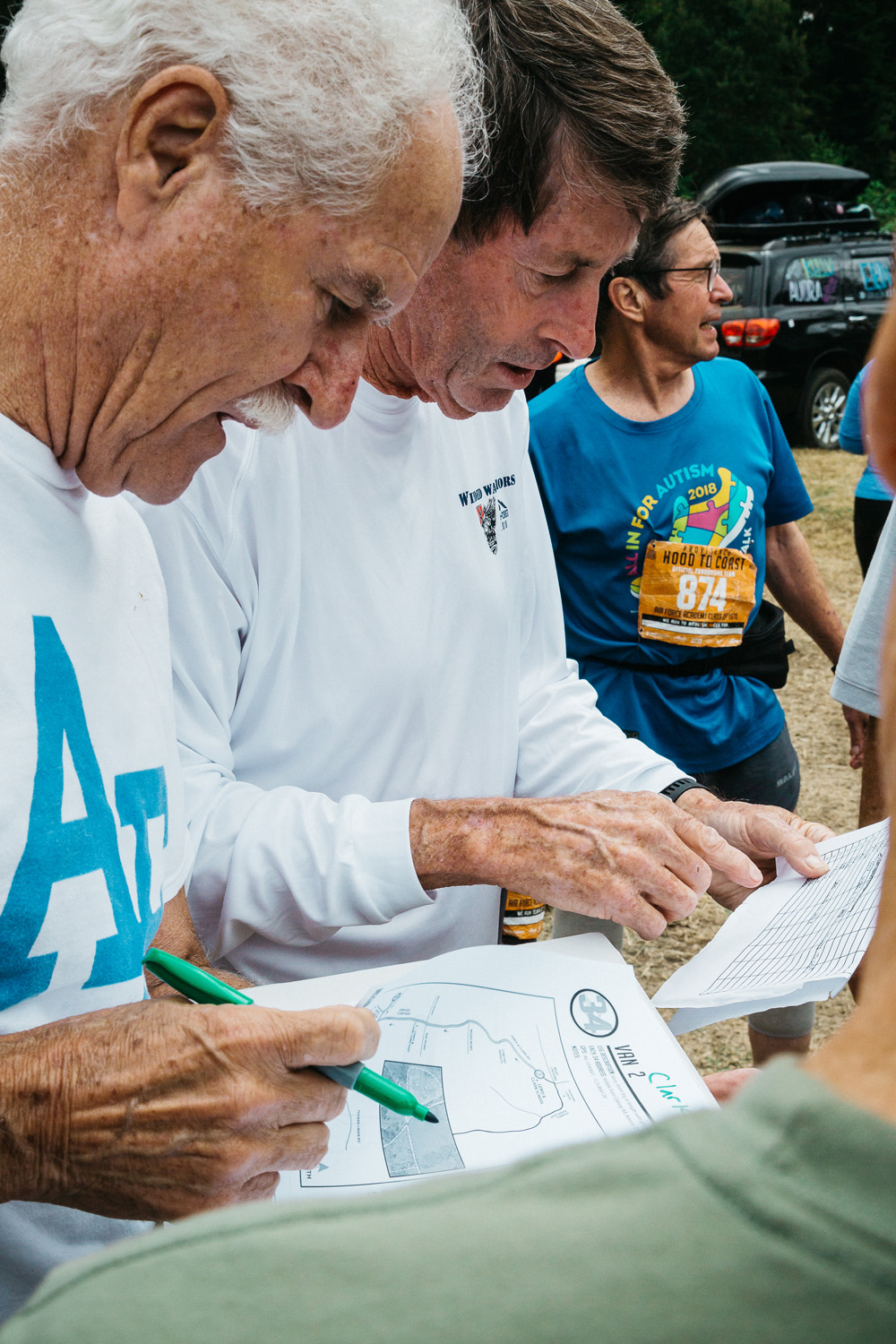 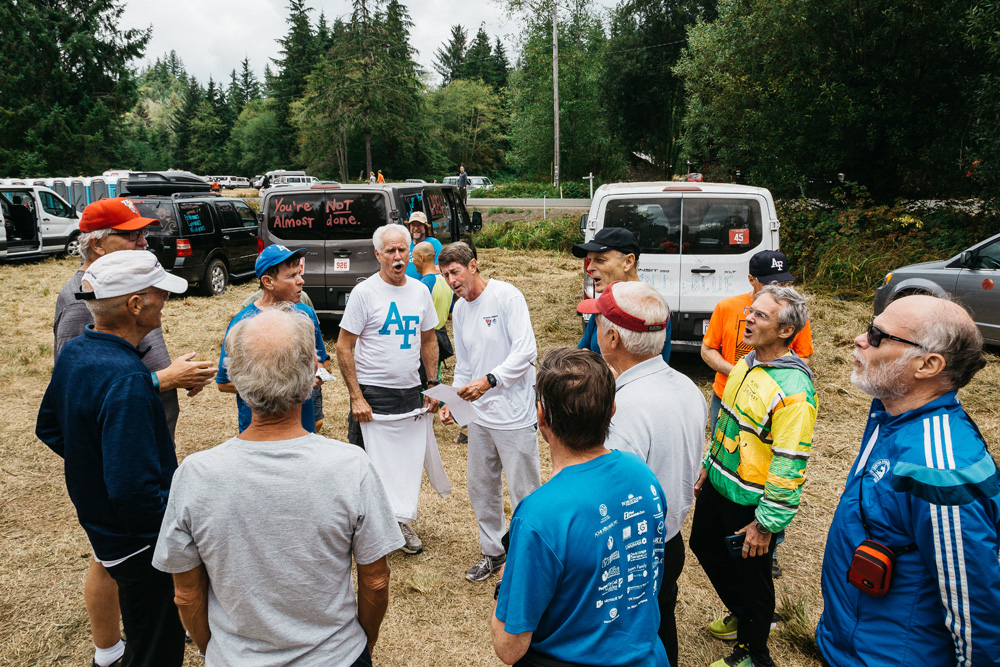 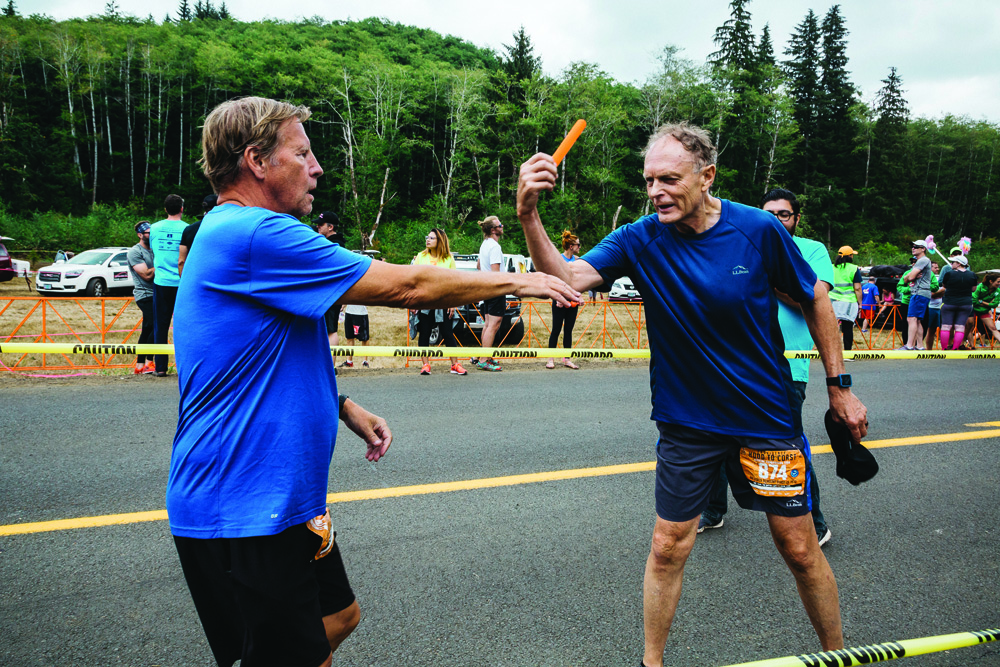 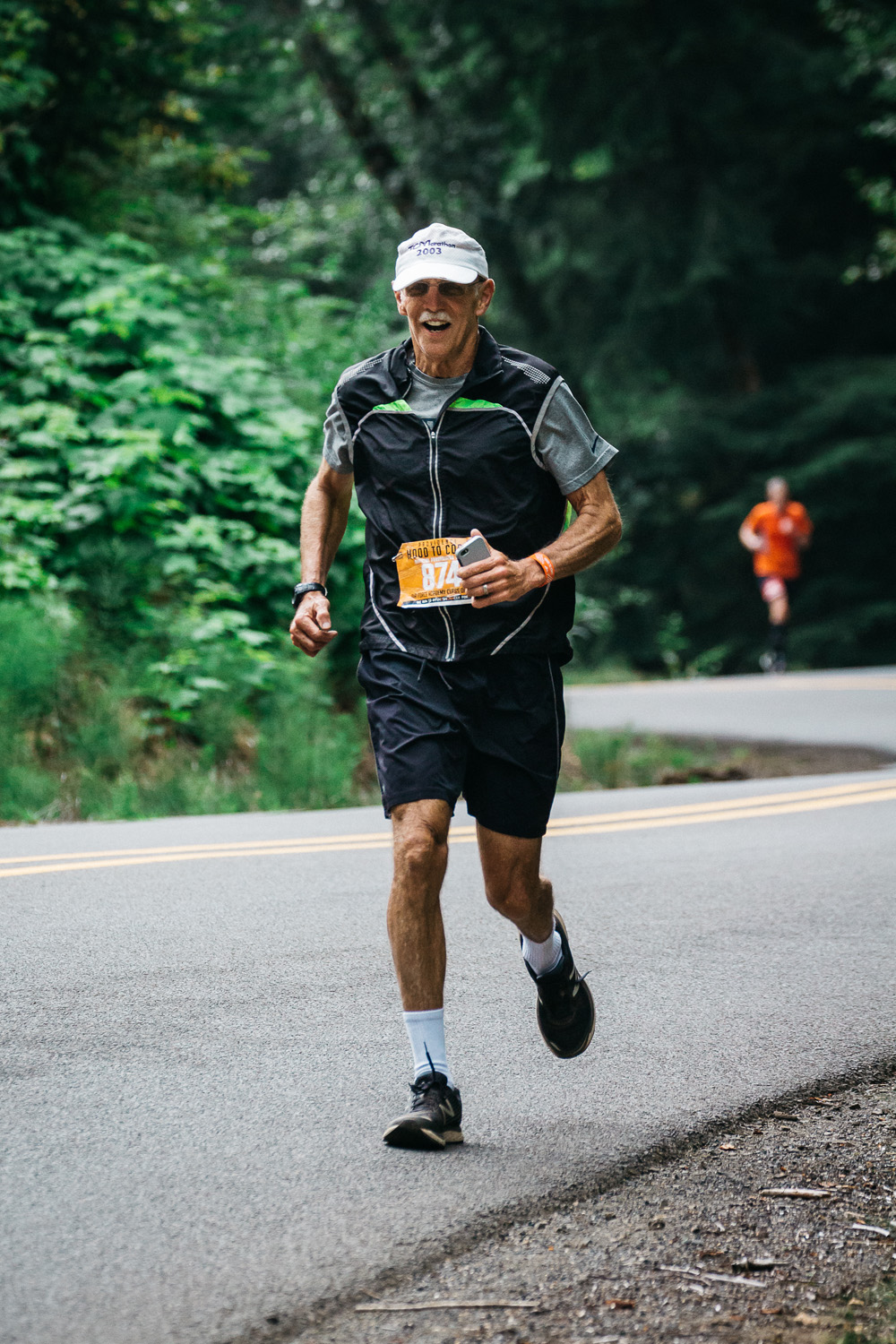 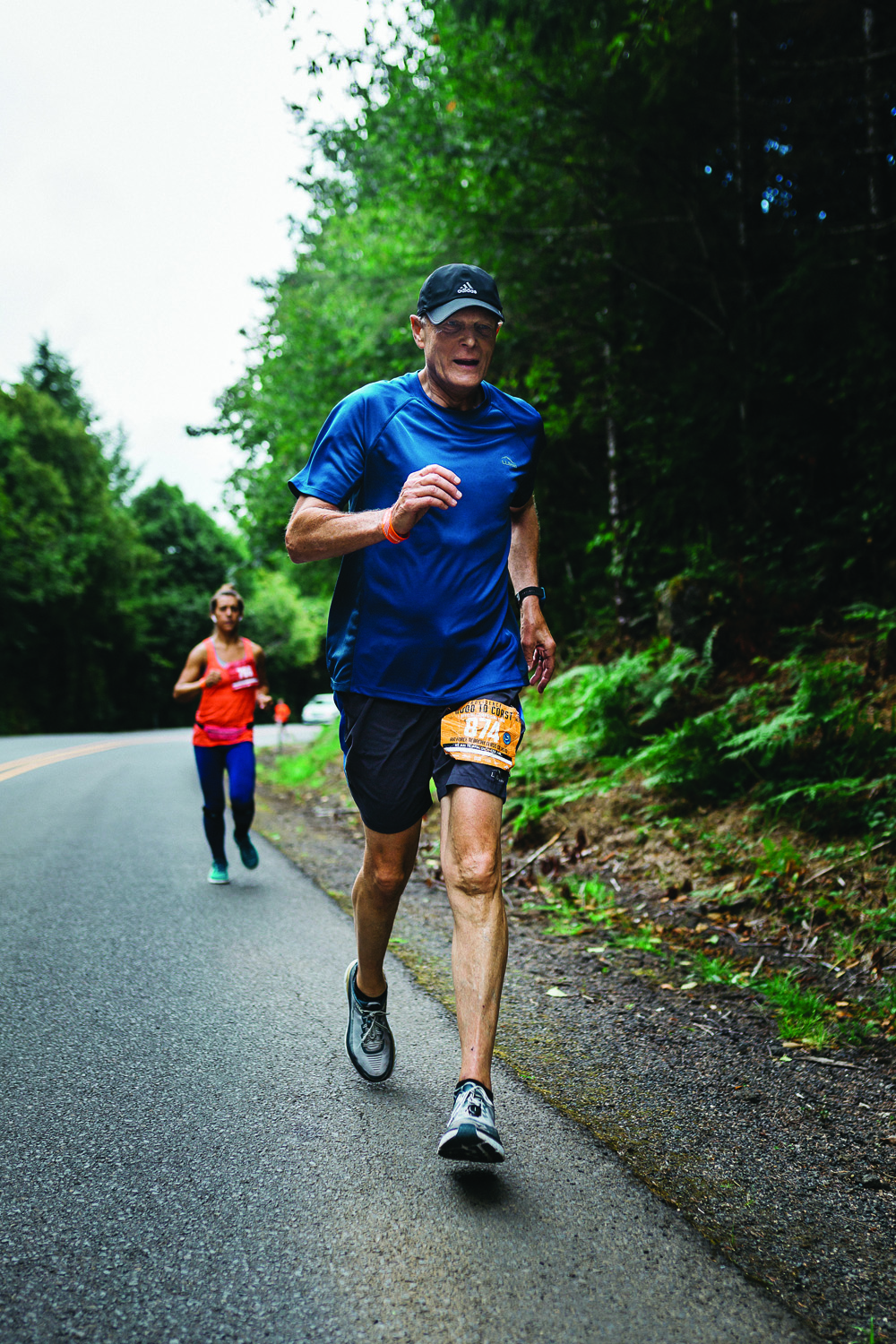 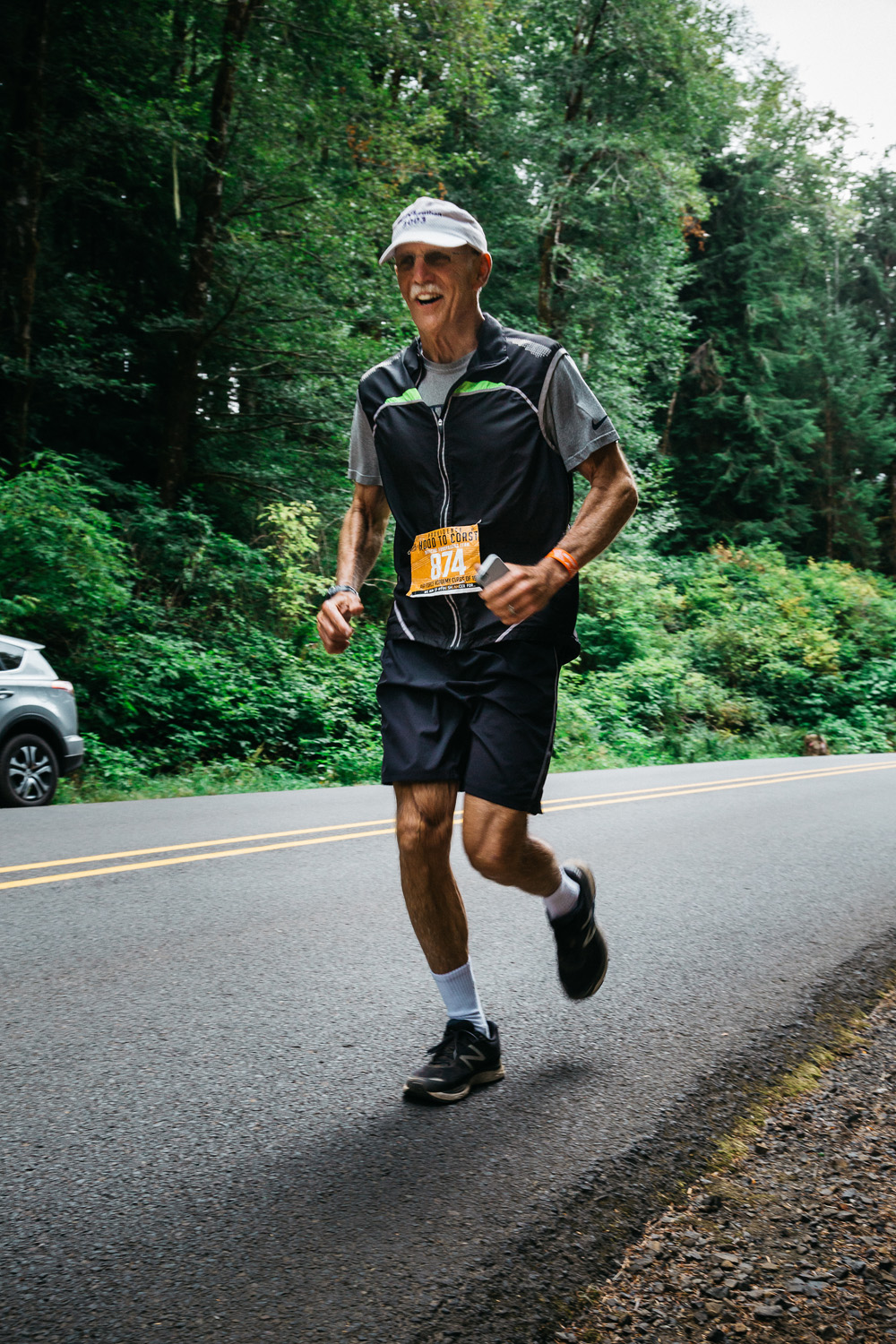 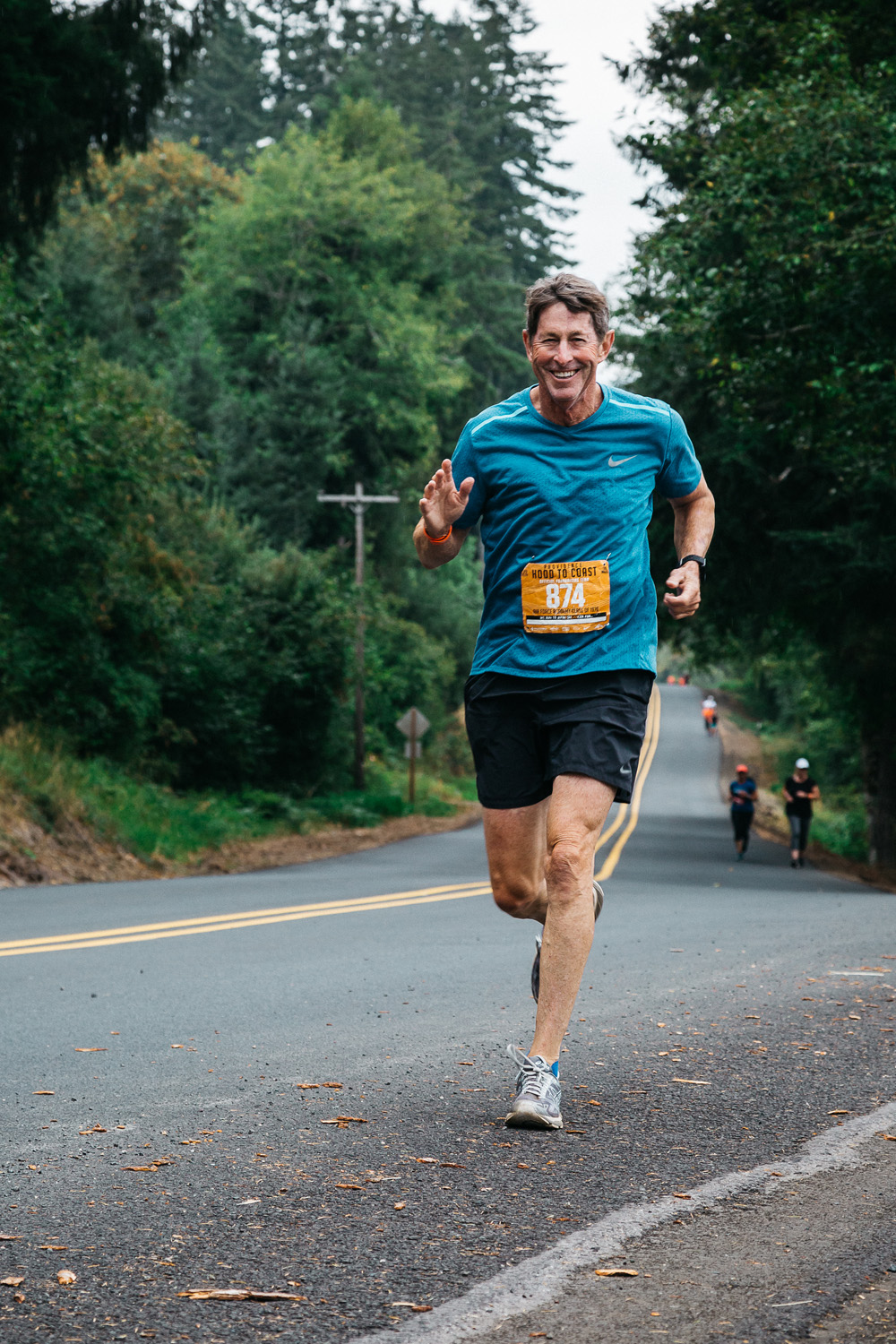 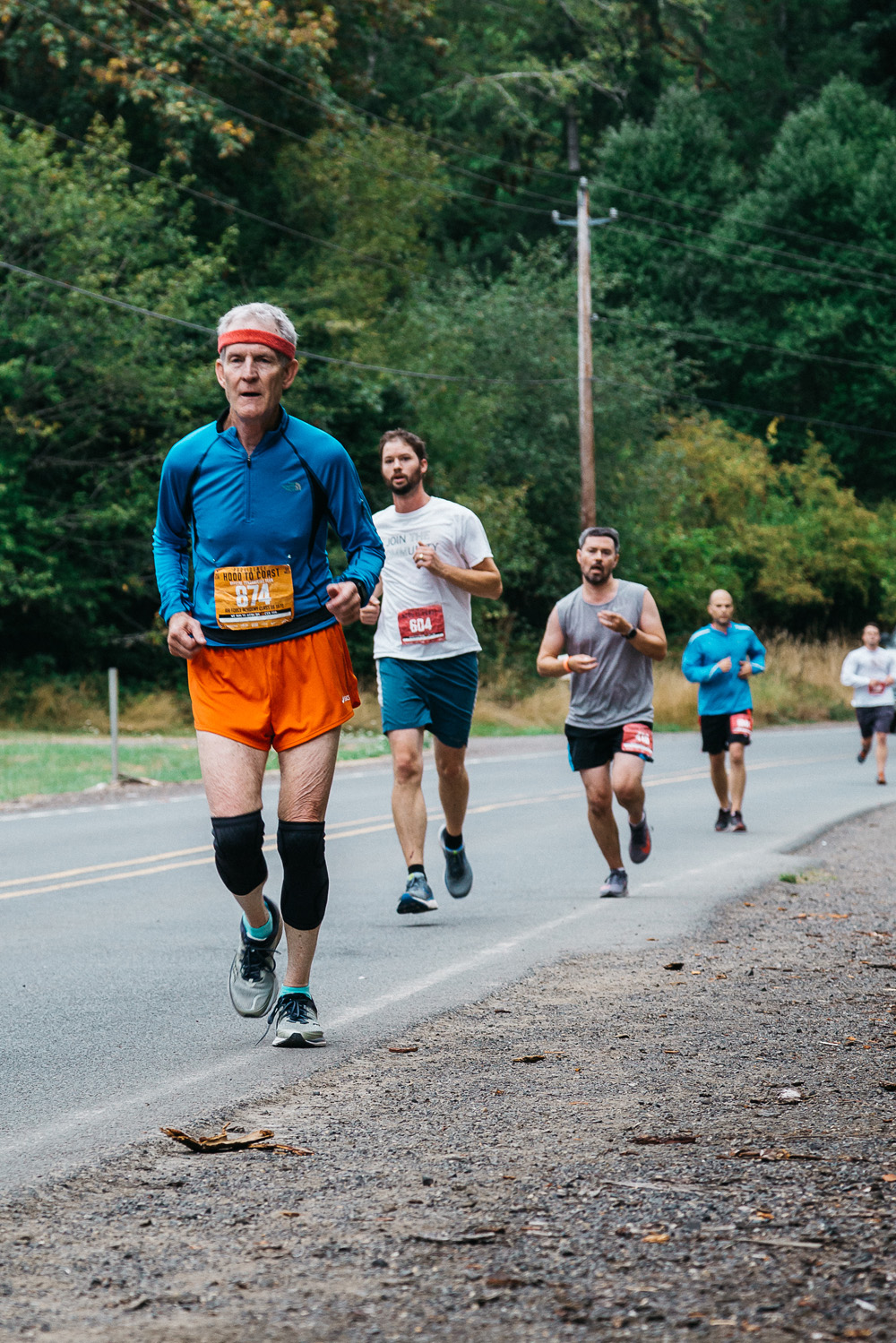 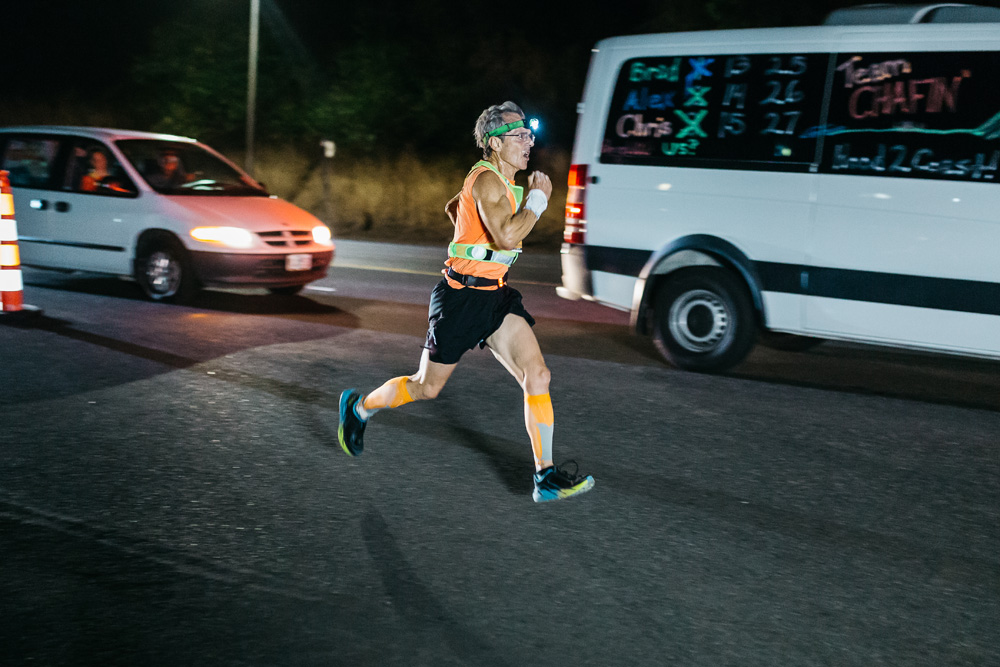 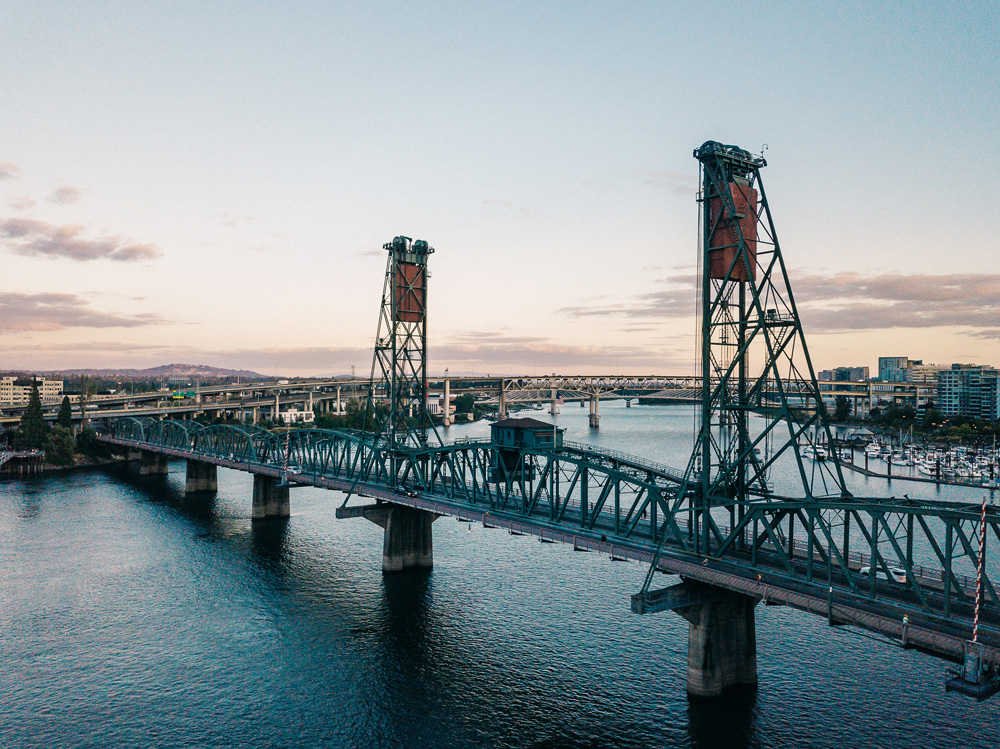 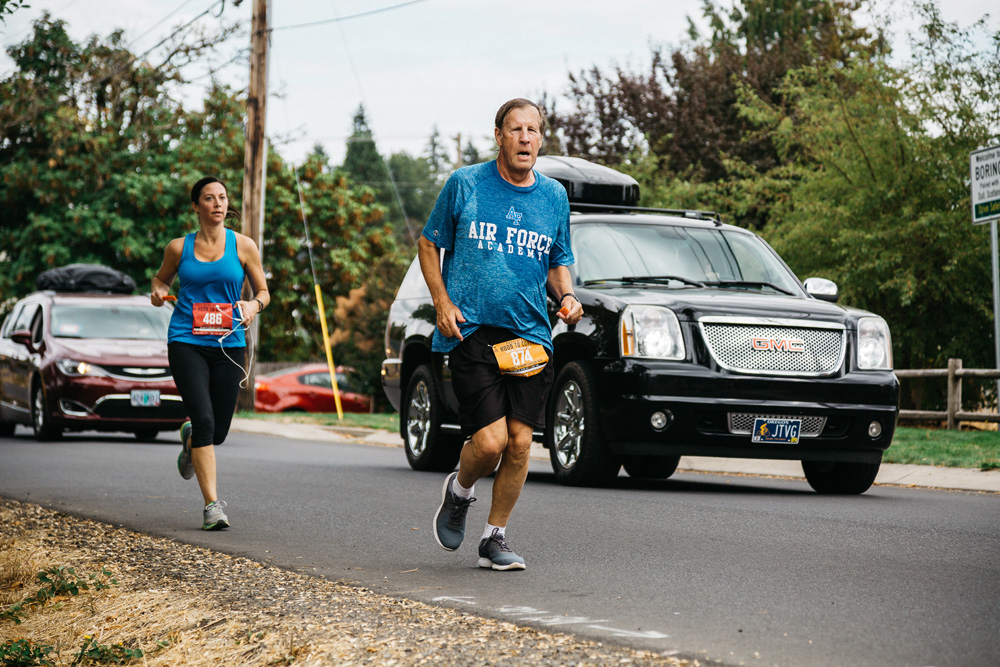 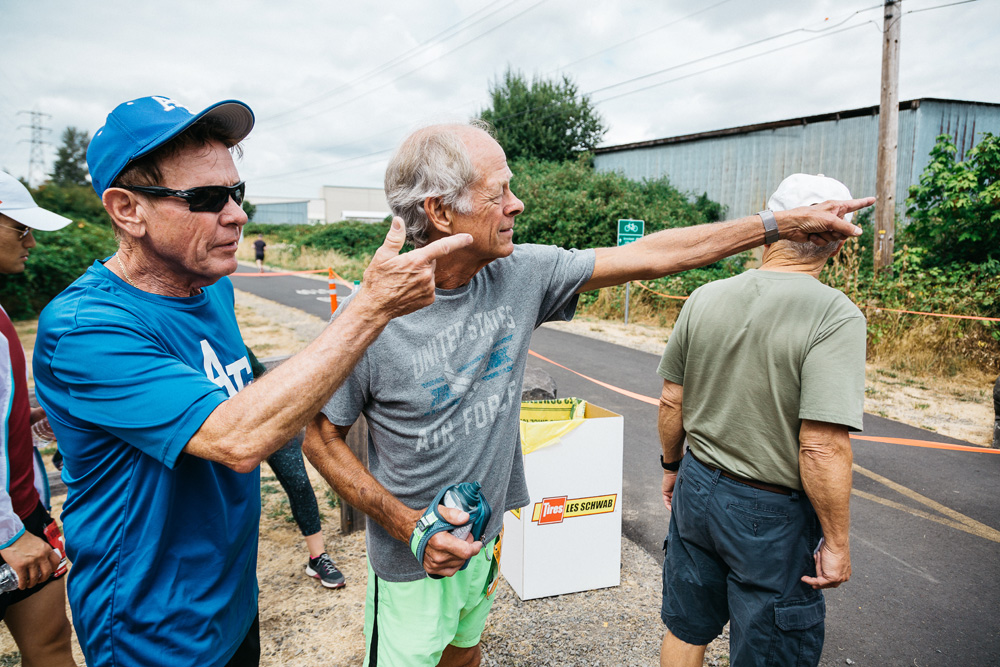 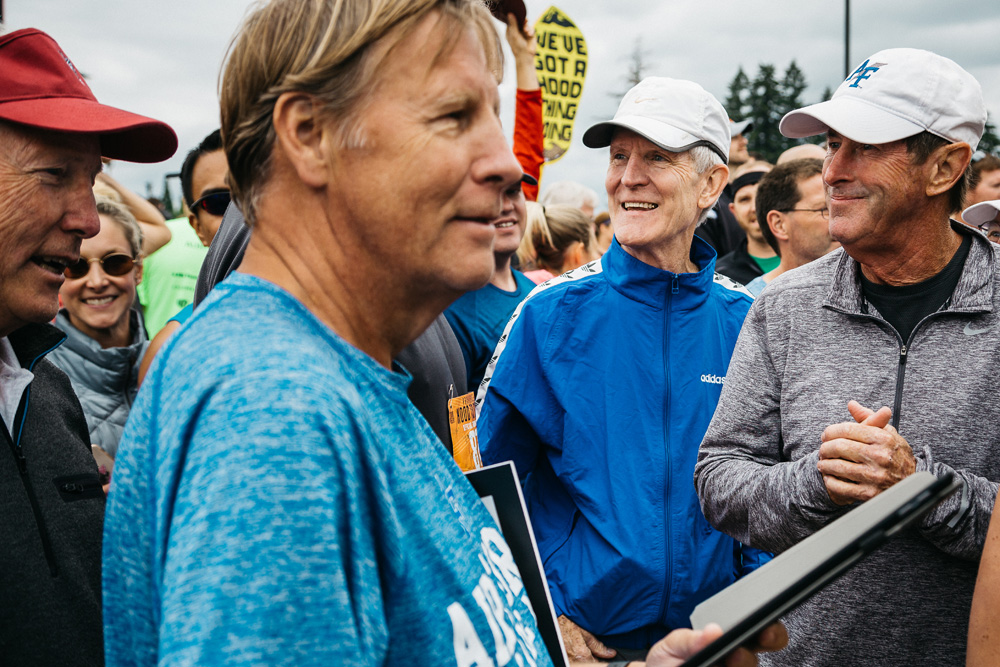 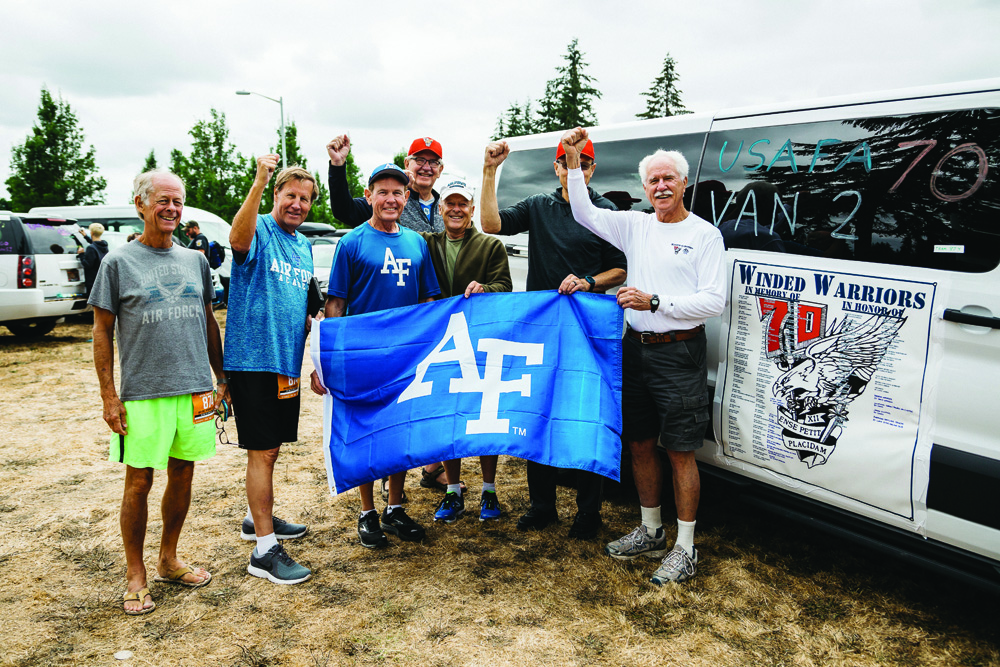 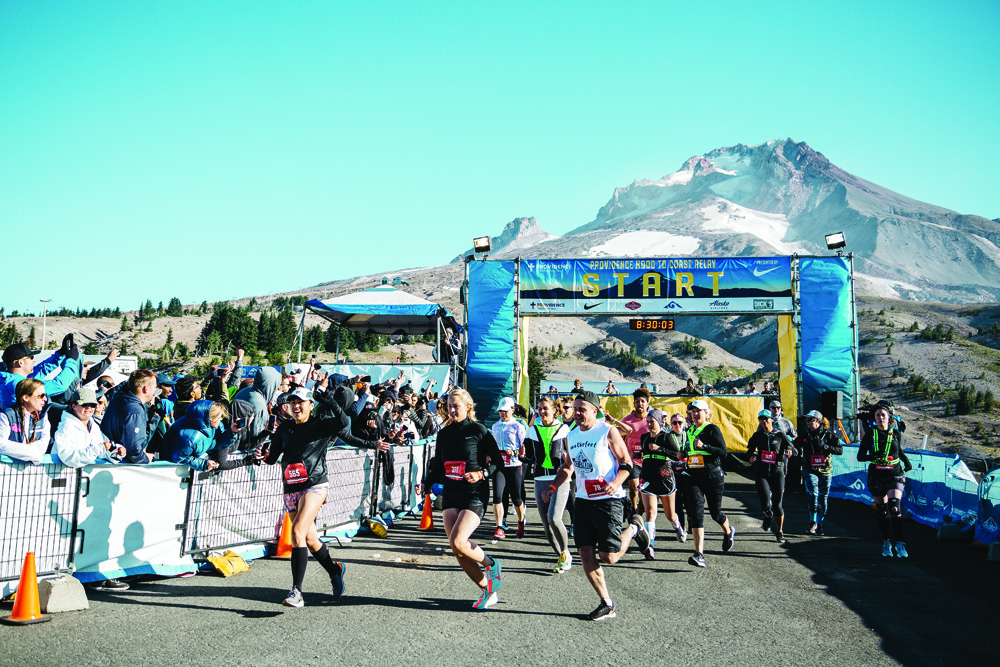 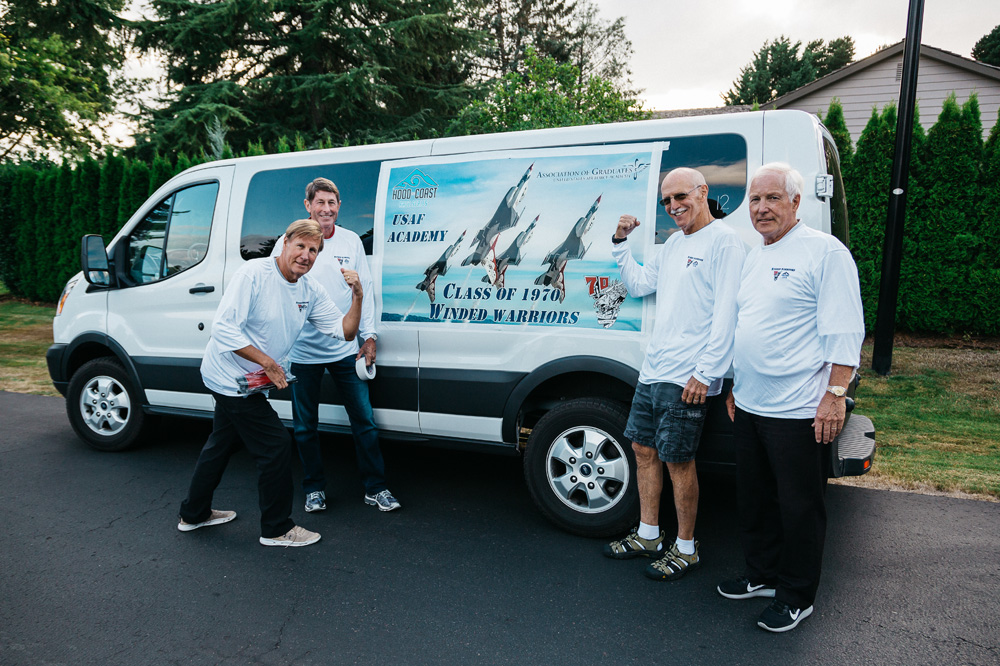 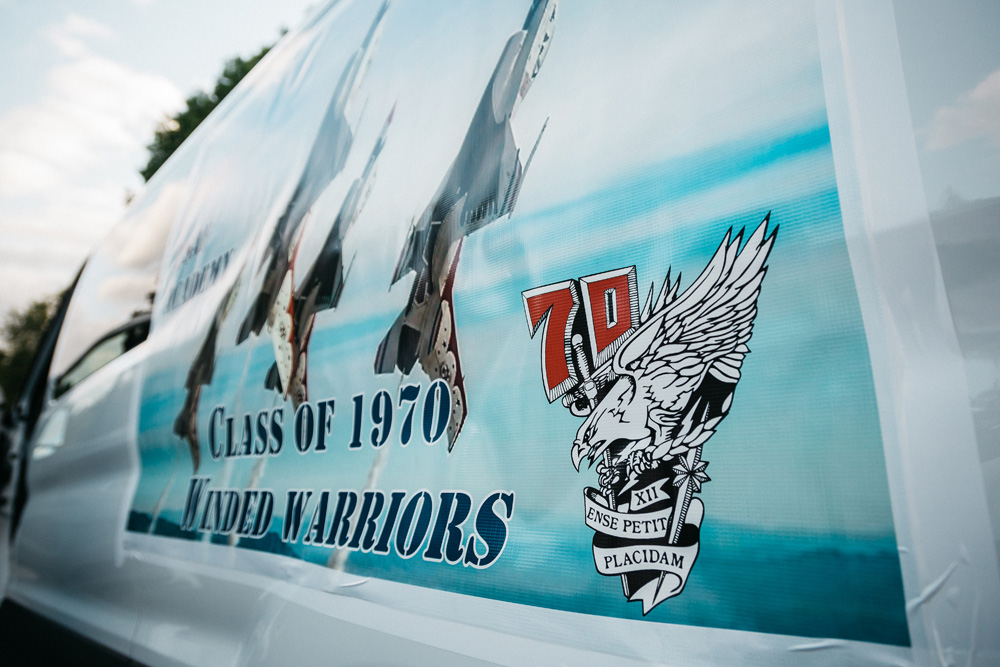 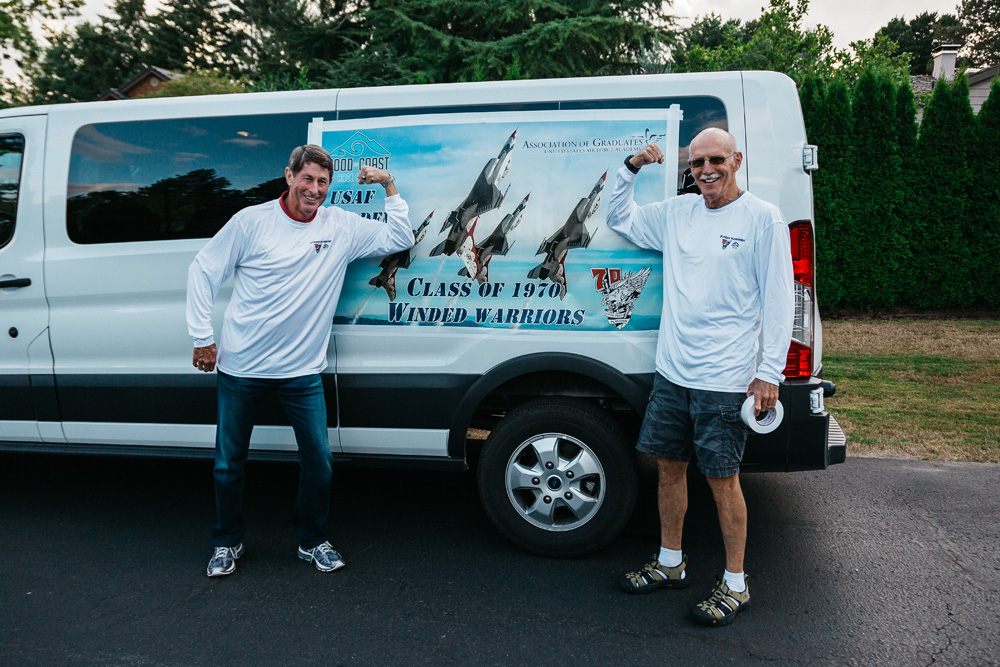 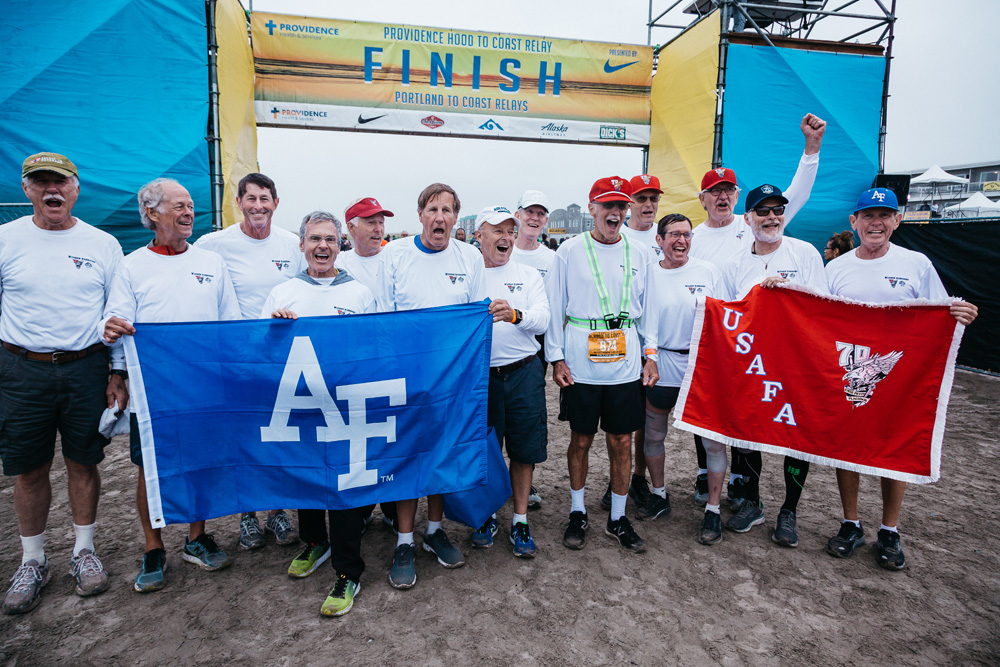 Hanging on the sides of the two Winded Warriors vans are banners listing the names of classmates and loved ones who are cancer survivors or who were lost to the terrible disease. Relay team members say each mile along the course will be spent thinking about those impacted by cancer.

Bjorklund’s wife, Cathy, was diagnosed with stage-three melanoma in 2005 and has been battling cancer ever since.

“I’m really running this for my wife,” he admits.

Mulford’s wife, Debbie, was diagnosed with rare bile duct cancer in 2010 but was treated and has fully recovered

“Doctors said she had less than a 5 percent chance of living,” he recalls. “So this race is very special to me. My wife is out here with me for the race and we’re celebrating her being cancer free.”

Mike Landers has two friends — including one USAFA classmate — who are battling stage-three cancer right now.

“So this is personal,” he says, fighting back tears.

“Every family has been touched by cancer,” adds Bob Welbaum. “My father died of a heart attack, but indirectly it was cancer. My mother had Hodgkin’s lymphoma.”

At the end of the day, the Winded Warriors raised a Hood to Coast individual team record of nearly $59,000 for the cancer fight. (Overall, the relay race raised $850,000 for Providence Cancer Institute.)

The Winded Warriors started the fundraising effort with the goal of securing $12,000 in donations — the minimum for participation in the relay race. The Class of 1970 team kept raising its goal as money continued to pour in.

“The thing that we’re probably most satisfied about is the way that, unbeknownst to us, we were able to engage the Air Force Academy community and get people to help with the fund raising,” says Tom Stein, team co-captain and van driver. “Academy graduates were very, very generous and surpassed all of our expectations.”

Not all of the team members knew each other prior to joining the Winded Warriors. But through the course of training and preparing for the relay, they’ve all gotten well acquainted or reacquainted.

“This unit was formed almost 50 years ago, and the bonds have remained strong because of all that we went through and learned together,” Lance Ammon suggests. “We were a team back then, and it has just carried forward.”

“The thing that makes this fun is that we’re with people that we have a bond with,” Coulson adds. “That bond just gets stronger as we face this challenge together.”

Landers is pleased to have had the chance to interact with classmates that he didn’t know before. “It’s great to have a new circle of friends, and we’ll all have this in common,” he says. “It’s real nice.”

There are more than a few jokes shared about the age of the Winded Warriors participants.

Prior to the start of the relay on the morning of Aug. 24, Bob Welbaum offers a couple jokes. (At least we think they were jokes.)

“We decided that the most important part to put on the race bib for medical information is ‘Do Not Resuscitate,’” he laughs.

Now it’s less than 10 hours to the finish line and Ted Coulson is chugging his way up a steep incline. He’s not about to let it kick his butt.

Aside from the humor, the story of the Class of 1970 running together in the race is a compelling one. Local television news crews interview the runners about their unlikely challenge, and a long feature report airs on the broadcast that evening.

The Academy grads had estimated that they would finish the 199-mile relay in about 34 hours, which would have them crossing the finish line at about 6 p.m. Friday night.

Each runner was expected to complete three legs of the 36-stage relay race, and each leg varied in length and difficulty, depending on where it fell along the route.

Unfortunately, a couple runners are injured along the way and are unable to complete their final legs of the relay. A couple team members step up to run a fourth leg to complete the race.

The entire team forms up 50 yards before the finish line so they can cross together, displaying the Air Force flag and Class of 1970 Battle Flag.

Mulford leads the group in a military cadence as they complete the challenge as one.

“We may be old, but we’re not through.

“We’ve got the finish line, we are blue!”

Even though he wasn’t able to run with the team because of injury, Black says the challenge sends a message to fellow Academy grads who are wondering what’s next in life.

“We’ve led useful and fulfilling lives,” he smiles, “but there’s a lot of time left. This is when you really need to start taking care of yourself … to enjoy the years that we’ve all looked forward to.”

When the race is over, Stein stands near the finish line, fighting back tears as he expresses his pride for what his fellow classmates have accomplished.

“This was more than just a race,” he admits. “It was about determination and guys willing — even at this age — to step up to a challenge. It’s the same determination that it takes to be successful physically, mentally and emotionally at the Academy. And this was about rekindling that esprit de corps that comes out of our Academy experience.”

An additional motivating factor was to promote service for a lifetime — the theme for 2018 that’s being promoted by Association of Graduates President and Chief Executive Officer Marty Marcolongo ’88.

“We were doing this for friends, classmates, neighbors and in honor of those who have been affected by cancer,” Stein notes. “It is about service to others. And there is no finish line when you’re serving others.”