Lt. Col. (Ret.) Jim Hansen ’69 happens to be celebrating his 72nd birthday by riding more than 70 miles on a bicycle in East Texas.

It’s April 30 and Hansen and his fellow bicycle enthusiasts have passed the halfway point of their 3,000-mile journey across the United States.

The primary organizer for the Save-22-A-Day Bicycle Tour, Hansen recovered from hip replacement surgery just in time to participate in this spring’s cross-country endurance ride.

“It’s our 50th reunion year,” says Hansen, who graduated from the Air Force Academy in 1969, “and we decided to schedule a bike ride across America to benefit veterans.”

Hansen is a relative newcomer to long-distance rides. He took up bicycling just 10 years ago when doctors suggested he stop jogging.

“I started having some back problems,” he explains. “Bicycling ended up being a great second sport to take up. It is healthy exercise and it sort of becomes a lifestyle after a while. You miss it when you’re not doing it.”

Hansen started getting really serious about the sport about eight years ago, riding in several weeklong tours of Colorado with USAFA classmates Jim Downey and Rick Olafson.

“That got me thinking that maybe I could go cross country,” he laughs.

Sure enough, in 2017, Hansen signed up for his first trip across the southern U.S. with Trans-America Cycling, a tour company out of Arkansas. He enjoyed the experience and set his sights on completing the trip again.

“It’s like you’re one with nature when you’re out there,” he explains. “If you see something that’s interesting, you stop and look at it … which you’d probably never do in a car.”

When he began organizing the spring 2019 tour, facilitated again by Trans-America Cycling, Hansen says he decided his second cross-country trip would have a purpose behind it.

He researched potential nonprofit organizations to support and began signing up bicyclists who were interested in supporting veteran programs while riding across the nation.

On April 1, 15 riders dipped their rear bicycle tires in the Pacific Ocean at San Diego, California, marking the start of their 49-day journey.

One cyclist, Rick Olafson ’69, joined the group for one day to show support for the cause, but then went home to deal with medical issues which prevented him from completing the tour.

The remainder of the riders on the tour averaged about 70 miles a day heading east. More than a few challenges greeted them along the way — steep mountain climbs in California and Arizona, shifting winds, heat and humidity in Texas, passing semi-trucks, and multiple flat tires or mechanical problems.

One side benefit for the riders, however, was the number of calories burned each day. Hansen says he often burns 5,000 calories when he’s cycling longer distances.

“You can eat whatever you want, whenever you want,” he says. “When you pull into a town, the first thing you go for is the biggest milkshake you can find … which normally you wouldn’t do at home. And then, what the heck, you can have a steak for dinner.”

Another pleasant surprise along the route came from experiencing different foods and cultures in the south, Hansen adds. Some of his favorite discoveries are Louisiana crawfish boils and New Mexico green chili.

On May 18, the riders rolled into St. Augustine, Florida, and all dipped their front bicycle tires in the Atlantic Ocean. Then they went for a swim.

“It definitely helped the sore muscles,” he laughs.

When it was all over, Hansen was extremely pleased with how the tour turned out. More than $115,000 was raised for a variety of nonprofits that meet the needs of veterans, including TADSAW (Train a Dog — Save a Warrior); Feherty’s Troops First Foundation; Navy Special Ops Foundation; and Paws for Heroes.


According to recent Department of Veterans Affairs (VA) studies, as many as 22 veterans per day — or one every 65 minutes — die by suicide. 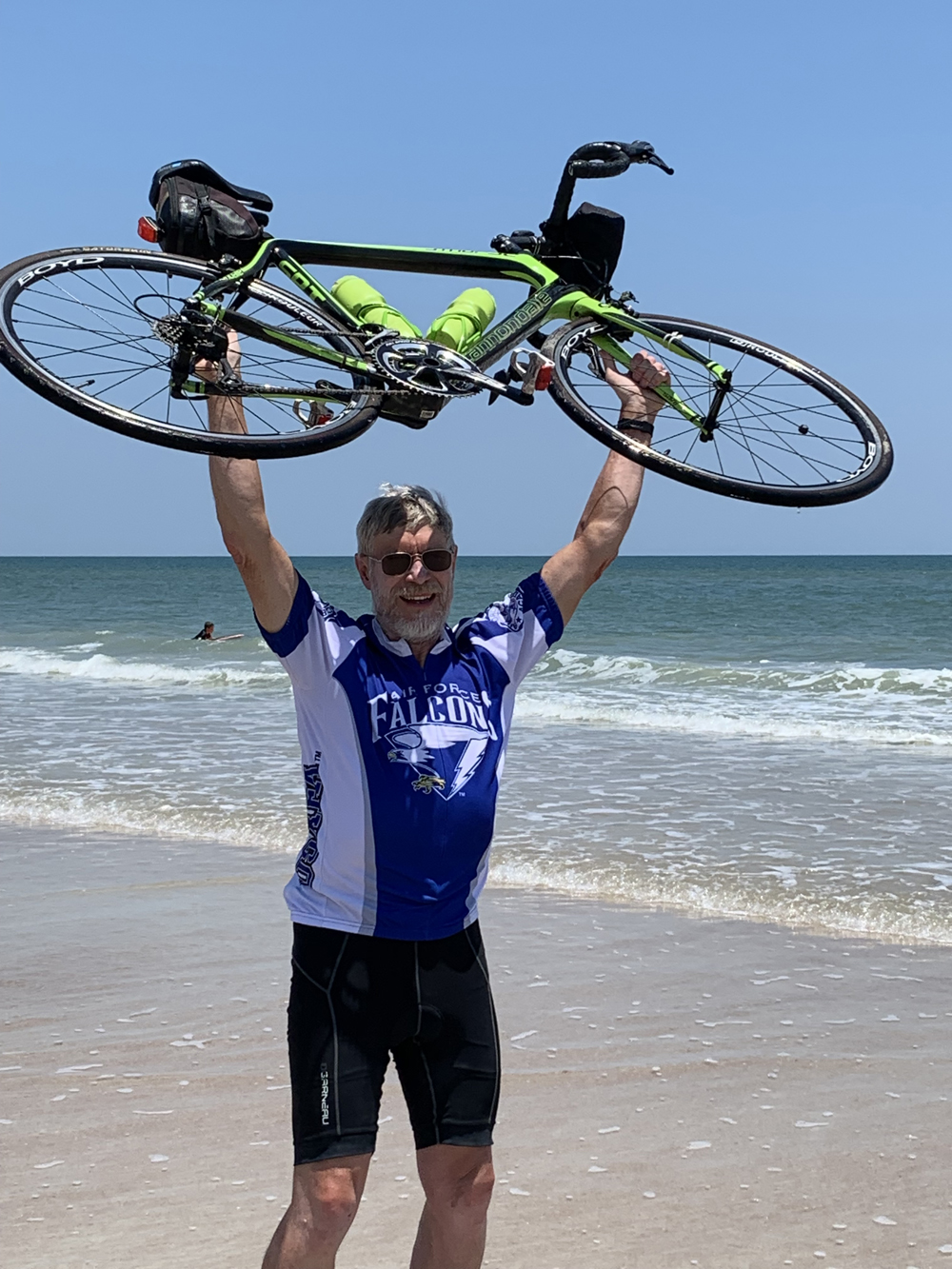 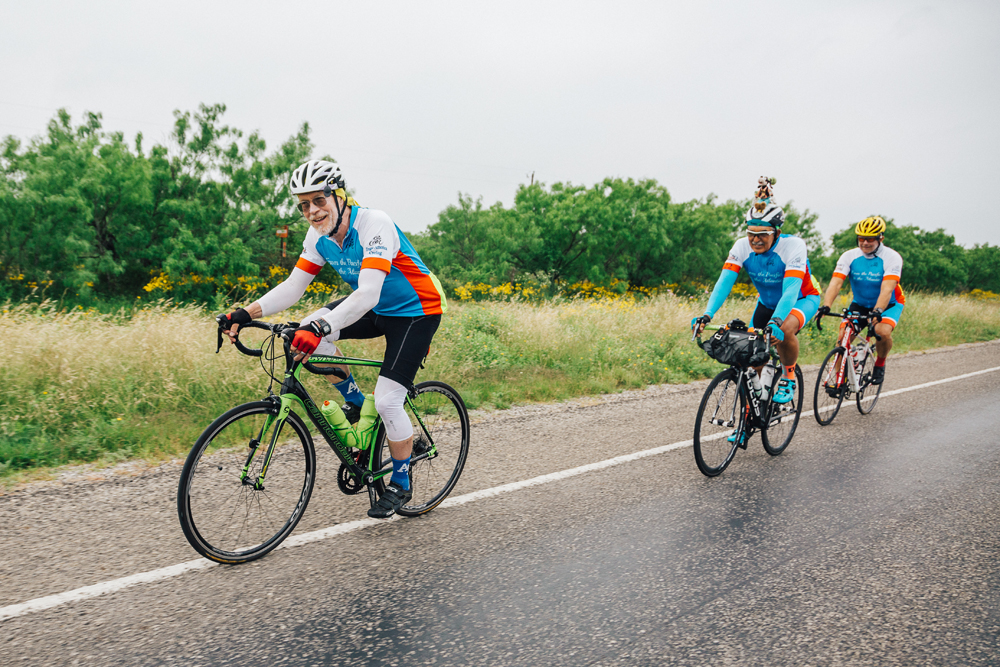 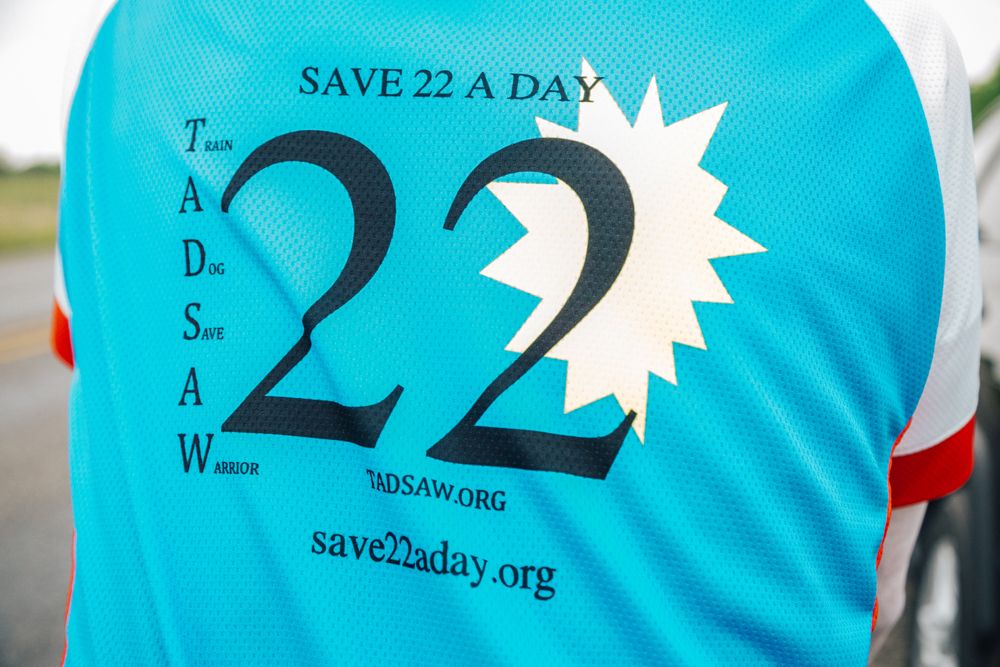 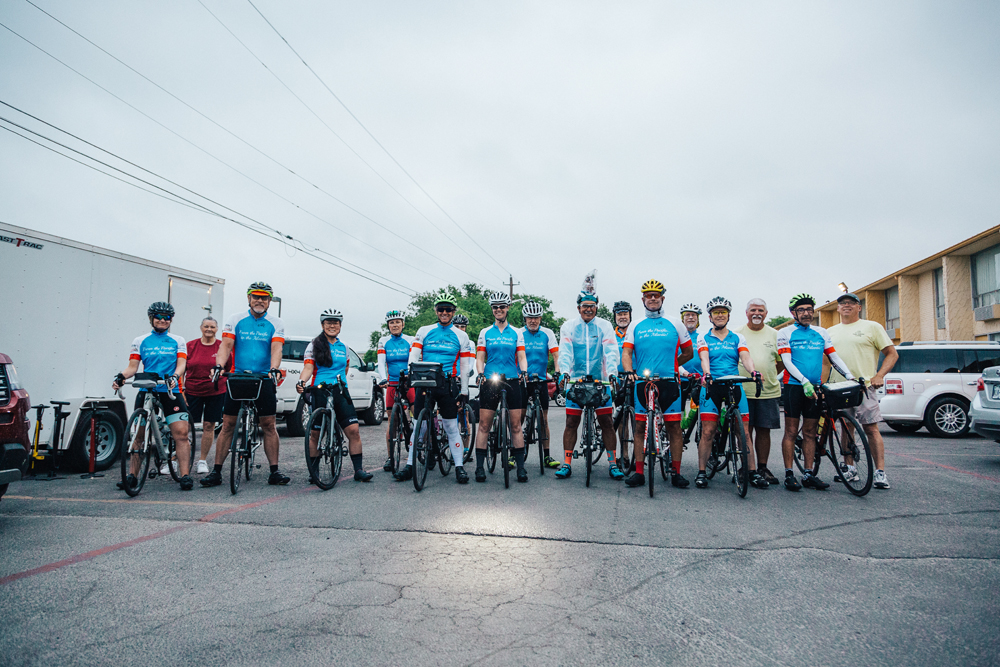 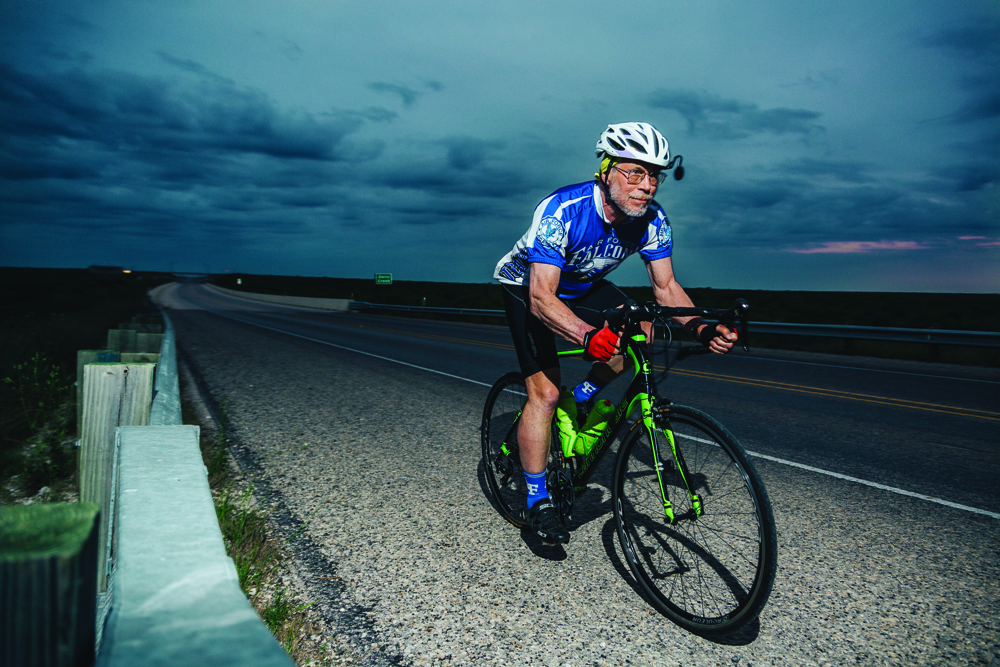 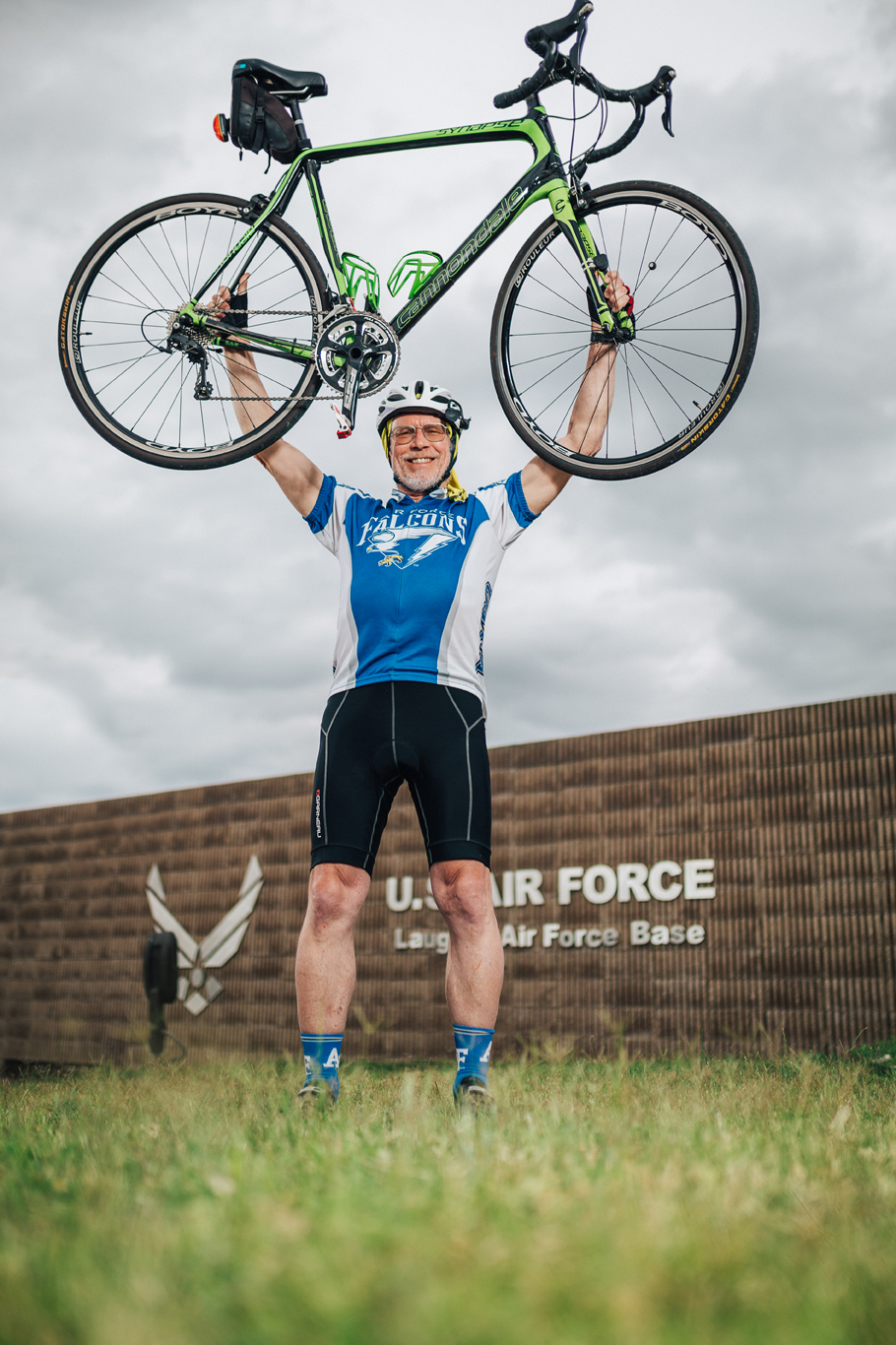 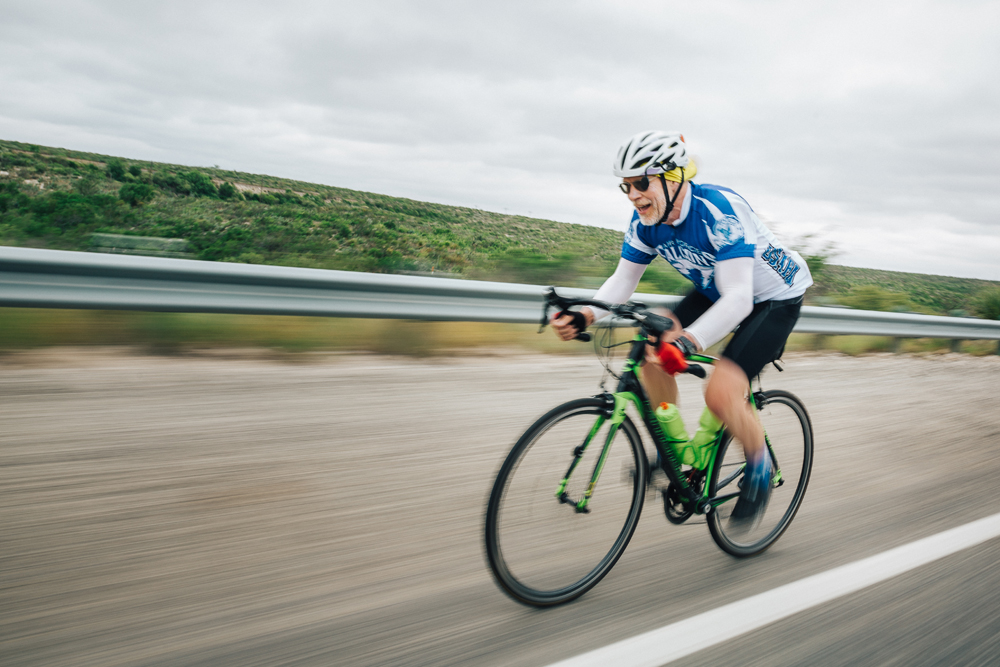 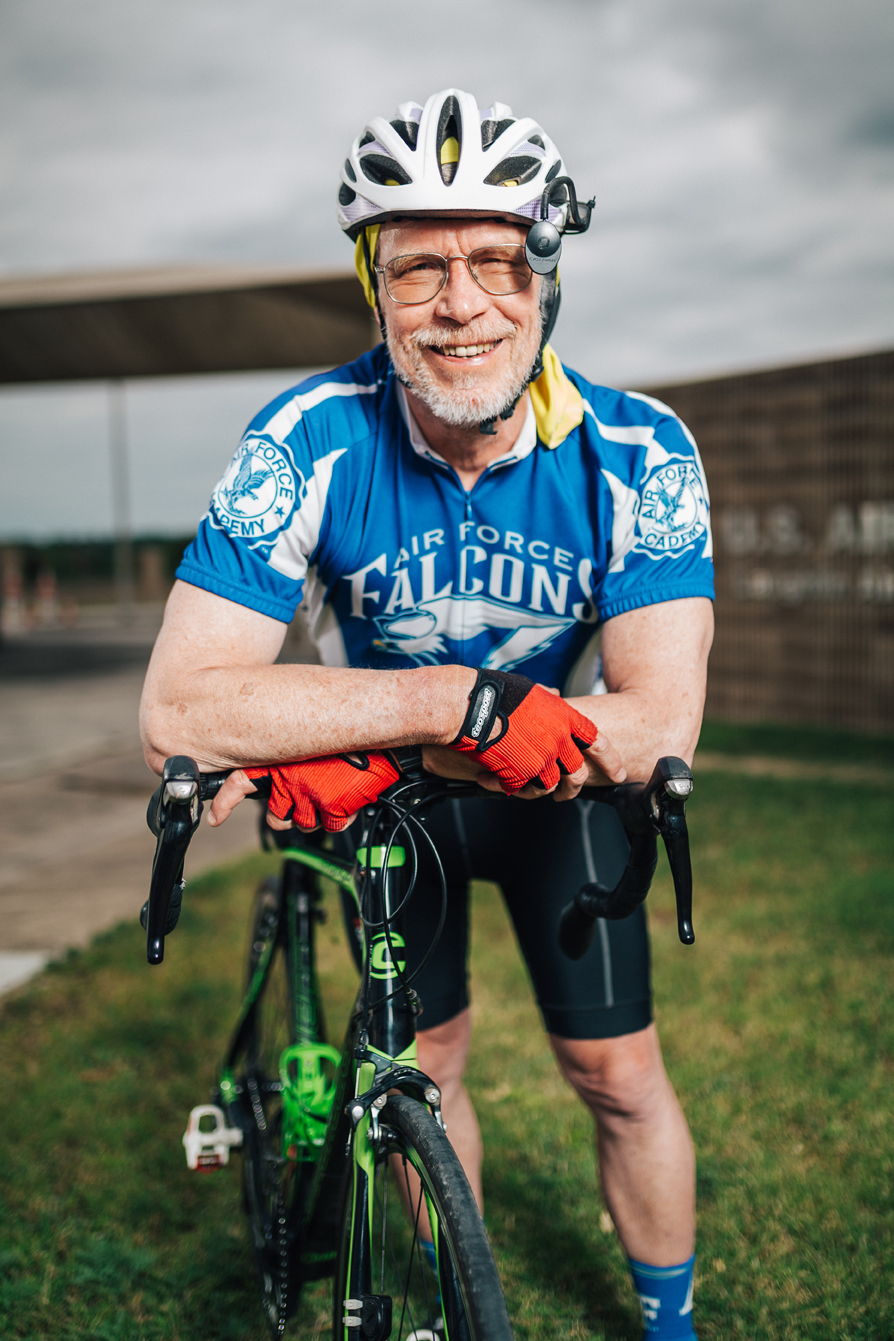 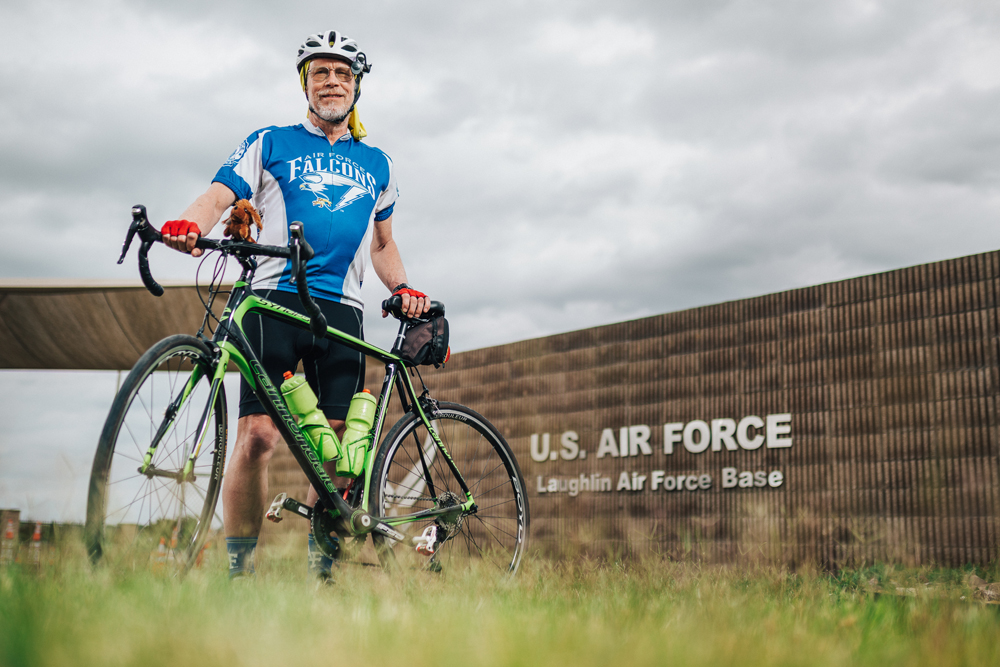 To prepare for his second cross-country tour, Hansen says he hit the road for a few lengthy rides near home. Mostly, however, he racked up miles in spin classes.

“I do spin classes three or four days a week,” he smiles. “Probably 80 percent of my cycling is indoors in a spin class with music. If you have great instructors, it actually pushes you as hard as if you were out on the road.”

The most difficult physical challenge of riding across the U.S. is the toll it takes on a person’s rear end, Hansen reports. That’s why it’s important to train in the days leading up to the start.

“It’s one of the most significant limitations,” he admits.

But even though a 3,000-mile bicycle trip seems daunting, Hansen assures everyone that the grind gets more manageable as the days go by.

“You actually build up your endurance and it gets easier,” he says.

It’s amazing that Hansen was along for the ride at all. He had his hip replaced in January and has recovered quickly.

His anterior hip replacement — performed by surgeons accessing the hip socket from the front — allowed the muscles to be moved away rather than cut. Hansen says that allows the patient to return to normal activity much sooner.

“They used all the best aerospace materials … the sort of things that I worked on during my entire Air Force career,” he says.

Fortunately, the hip didn’t give Hansen any trouble during the tour.

According to recent Department of Veteran Affairs (VA) studies, as many as 22 veterans per day — or one every 65 minutes — die by suicide. Hansen says he’s personally witnessed the debilitating impact of wartime experiences on warriors who have returned home.

“The veterans who have PTSD, a lot of them have severe mental issues,” he notes. “They can be really reclusive and hole up in their apartment for weeks on end. Many don’t go out and don’t socialize. These are people having difficulties and I’ve wanted to help them.”

One of Hansen’s fellow tour riders, Roberto Cintron, knows well the challenges of PTSD sufferers. He’s a former Air Force intelligence officer who came home from combat and struggled to reintegrate due to PTSD.

He says he was excited to be part of an effort to raise funds for veteran programs that help address mental health needs and reduce suicide rates.

“As a veteran, and also because PTSD changed my life … I felt compelled to do this,” Cintron says. “The tour has been a blessing.”

As Hansen searched for a “catchy phrase” to attach to the cross-country tour, he and his wife, Merry Ann, landed on “Save-22-A-Day Bicycle Tour.”

“We realize that we’re not going to save 22, but if we could save more than a handful we’ll be very successful,” he smiles. “I think we’ve raised enough money to do that.”

Thankfully the tour group has attracted a fair amount of media attention along the way. A number of newspapers and television stations produced stories about the group and their efforts to raise awareness of veteran suicides.

“We’re doing all that we can to get the word out,” Hansen says. “I’m leaving brochures and cards explaining about TADSAW in all the hotels. They’ve all been happy to hand them out.”

Hansen and his wife, Merry Ann, have always been dog people. So it made sense that the tour support TADSAW, a nationwide nonprofit based in Texas.

Since 2001, more than 500,000 military personnel have returned home with PTSD and another 500,000 returned with brain injuries, Hansen estimates.

“There are plenty of people who considered duty, honor, country and went off to a war zone,” he says, “and they need help now.”

Most dogs in the program are rescue animals that are trained to calm, assist and monitor the mental health of their veteran owners. Since the organization launched in 2010, more than 998 medical alert service dogs have been placed with U.S. veterans. The dogs are provided to veterans free of charge.

The cost for training each dog/veteran team is approximately $2,500, according to Hansen. TADSAW trainers are scattered throughout the nation, working closely with veterans and their “Battle Buddies” for 20 to 25 weeks.

“When a veteran is having an episode coming on, from a nightmare or whatever, the brain is producing hormones — adrenaline and cortisol,” Hansen explains. “The dog can smell these things before the event is so far along that it turns into a big problem.”

If the dog senses an increase in anxiety, the Battle Buddy might turn on a light or nuzzle up to its owner to provide comfort.

“If the veteran starts petting the dog, their brain starts producing dopamine and oxytocin hormones that put you in a good state,” he says. “So a dog can help stop one of these episodes from happening. It’s pretty amazing what can happen.”

All along the tour route, Hansen has been trying to recruit dog trainers for TADSAW. He reports that a number of major military communities — El Paso, Texas, and Colorado Springs among them — no longer have an active trainer.

“They don’t get rich doing this, but it really helps veterans,” he says.

Visit tadsaw.org for more information or to get involved.

Hansen is thankful for the opportunities that being a USAFA graduate has provided him through his career and life.

After 23 years on active duty — including assignments as director of the National Aero-Space Plane Institute of Composutes, commander of the European Office of Aerospace Research and Development in London and as an associate professor in the Department of Mechanical Engineering at the Academy — Hansen transitioned to civilian engineering roles with the Oak Ridge National Laboratory in Tennessee.

When he fully retired in 2013, Hansen says it was only natural for him and his wife to start giving back. They have volunteered for a number of nonprofit organizations and have remained fit by regularly exercising.

“When you retire, there’s no reason at all to get bored,” he says. “There are just lots of opportunities to keep busy. It just continues to be a great life.”

Hansen offers a piece of advise for the Class of 2019 — the Class of 1969’s Legacy Class — as it graduates from USAFA.

“Go out, and have a great career in the Air Force,” says the 72-year-old. “When it’s all over, there is still plenty to do. It’s amazing what one person can do, and especially if you gather other people together to help do it.”

(P.S. Hansen wrote a blog throughout the Save-22-A-Day Bicycle Tour. Check out save22aday.blogspot.com if you’d like to review more daily details and save22aday.org for more photographs.)