(This article appears in the September 2019 edition of Checkpoints magazine)

Through long-standing relationships and a few donor-funded opportunities, cadets were able to apply their educations toward addressing employer challenges as part of the Cadet Summer Research Program (CSRP). Cadets were placed with more than 130 companies and organizations to gain valuable experience and assist with research and projects.

These internships give cadets the opportunity to network and strengthen relationships between the Academy and its partners. Fifteen of them were funded by the host organizations through the USAFA Endowment, including Boeing, Lockheed Martin, Cubic and Littlejohn, making it possible for even more cadets to gain these valuable experiences.

Here is a sampling of experiences from the 2019 CSRP participants.

Landwehr developed a web application for Microsoft’s internal websites to help the company’s developers who work on Microsoft networks. The application also needed to be accessible to those who are blind. Later in the internship, she worked with the company’s Cyber Security Group and programmed a quick-response cyber tool to detect malware on a single machine.

Gresham used computational nuclear physics to improve the understanding of detectors, which can lead to new scientific discoveries and improve nuclear counter-proliferation capabilities.

Wasz and Moore worked with plasma spectroscopy to streamline the process for creating thin, amorphous carbon film through deposition (creating microscopic layers). Duvall worked in the legal office researching the complex issue of ensuring buildings are in compliance with the Americans with Disabilities Act. Nelson worked on software development for a nuclear stockpile analysis project that is reanalyzing U.S. nuclear films using modern computer techniques.

The cadets, members of the Department of Biology’s international Genetically Engineered Machine team, conducted research on novel bioremediation water treatments for an industrial contaminant that is common on military installations.

Emanuel explored the potential capabilities and applications of explosively pumped flux compression generators (EPFCG), also known as magnetic flux compression generators (MFCG). The United States and former Soviet Union built and tested these generators on a grand scale during the Cold War as the potential source of a mass electromagnetic pulse (EMP) style weapon. She reviewed MFCG theory to determine if the generators could be miniaturized to simulate an EMP mechanism capable of interfering with electronics in a near radius.

Martin worked with the quantum algorithms team as they wrote a series of programs designed to test the characteristics of the IBM Q 20-qubit quantum processors. Through various programmed functions, hours of data collection each day and near-constant communication with the IBM team, he built four tests involving several areas of quantum computing.

The cadets helped research, program and test a new customization feature in Prepar3D v5.0, an aviation, maritime and ground simulation platform revolutionizing pilot training. The software allows PC users to create and practice training scenarios and receive relevant feedback. To ease the testing process, they also added heads-up displays. Their work will be applied in the next version of Prepar3D and will contribute to the pilot training environment.

Geraghty delved into a technique to improve the geolocation uncertainty of Ground-Moving Target Indicator Radar, particularly as antenna aperture size shrinks on an airborne platform. He wrote thousands of lines of code and gathered several hundreds of thousands of data points. MIT Lincoln Laboratory will use his results in more specific future applications.

The cadets assisted with group projects focused on modernizing the Pentagon's networks. They reviewed the preliminary designs for software defined networks (SDN), researched network architectures and made several recommendations on how SDN could be made more secure. They also visited Pivotal Labs and Samsung for industry days to experience how the Department of Defense interacts with the private sector and to be exposed to modern technologies.

The Office of Presidential Appointments coordinates between the White House and the Secretary of State’s Office to acquire the necessary signatures and coordinate commissioning ceremonies for new ambassadors and other senior personnel. Beane participated in many commissioning ceremonies, including an Air Force Academy graduate, retired Brig. Gen. David R. Stilwell ’87 as the assistant secretary of the Bureau of East Asian and Pacific Affairs, and the newest ambassador to Ireland.

Hankhouse worked with the plans and policy division. He drafted a review that discussed whether National Guard personnel, in their Title 32 status, could train on USCYBERCOM’s Title 10 cyber infrastructure. His review went to the Staff Judge Advocate office for approval and next steps.

The cadets served as security operations interns. Kuhn worked on security orchestration, automation and response, including the use of state-of-the-art industry tools and machine learning to automate responses to security incidents. His work will help a smaller security response team handle more incidents with a higher success rate and lower incident turnover rate. Schulz analyzed thousands of vulnerabilities that were found by an automatic vulnerability scanner to determine if each was a false positive, enhancing the success rate of the automated tool.

Martin completed an eight-week course on leveraged finance and another course on collateralized loan obligation. He worked with Wellfleet analysts to evaluate the health of companies that were selling loans and completed analyses of previous years’ portfolios. He gained a new perspective on how private companies operate, and he collected ideas for further discussion with faculty in the Department of Management. 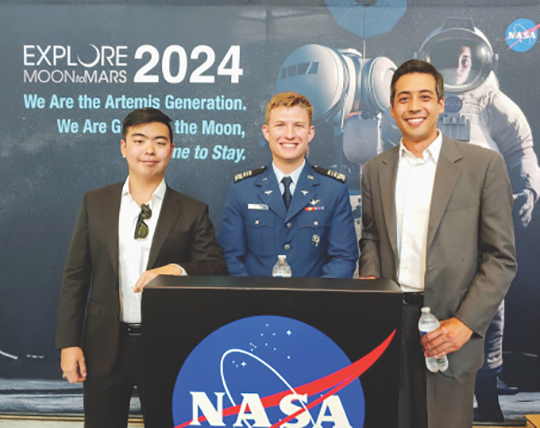