The United States Air Force Academy renamed a support building to honor one of the institution’s engineering pioneers at a special ceremony Thursday, Oct. 14, 2021.

The Col. Arthur G. Witters Civil Engineering Building was named in memory of Witters, the first civil engineer at USAFA and one of the primary designers of the campus. He passed away in 2011.

About 100 family members, former colleagues, Academy cadets and USAFA senior leaders were on hand for the event at Doolittle Hall.

Lt. Gen. Richard Clark ’86, current USAFA superintendent, talked about his first visit to the school when he was 17. When he arrived on campus, Clark said he was immediately impressed by the institution, the buildings and the surroundings.

“Everything about it said let’s go do something great,” he recalled. “That’s what Col. Witters did for us. He laid a foundation for something that was great at its inception and it’s only becoming greater.”

Clark said it was only fitting that Witters, who was an air warrior during World War II, would go on to influence future generations of cadets at the Academy through his engineering genius.

According to Col. (Ret.) Thomas Hayden III ’74, who served as the 18th USAFA civil engineer, Witters was the key leader in the planning for, designing and constructing the Academy. In fact, Witters was the person who drafted the congressional bill, Public Law 325, which officially established the new Air Force Academy. The legislation was eventually signed by President Dwight Eisenhower on April 1, 1954.

Working closely with the Academy’s first superintendent, Lt. Gen. Hubert Harmon, Witters also led the design and construction of the temporary USAFA site at Lowry Air Force Base in Denver.

When Colorado Springs was chosen as the location for the new institution, officials looked at two local sites for the future campus — the northern site, where it is now located, and a southern site near the Broadmoor Hotel. Gen. Harmon was in favor of the southern site but Witters convinced him otherwise.

According to Hayden, the northern site was chosen due to additional space for expansion and for a future airfield, even though there were no immediate plans for such a facility.

“The Air Force was against having an airfield for any sort of flying training at the United States Air Force Academy,” Hayden noted.

Witters and his team soon developed 82 design directives for the permanent site and oversaw construction of all the facilities completed by Skidmore Owings and Merrill.

For several years, Witters was the only person authorized to testify before Congress on Air Force Academy matters, Hayden said. Witters did so a total of 22 times.

Witters eventually left the Academy and went on to command a flying squadron and a civil engineering squadron. He later became a base commander.

In 1961, he became chief of the Air Force’s architectural division. A year later, he was named consultant for the design of the new Cadet Chapel at USAFA. Several years later, he was instrumental in securing federal funding for the construction of the Cadet Fieldhouse.

“He was a key figure in making history happen,” Hayden said. “For his immense contributions to the creation of the Air Force Academy, Col. Arthur Witters certainly commands respect as a founding father. This was a great man – a great man who was destined to build the United States Air Force Academy.”

“He became not only my first commanding officer, but he became my personal friend and my mentor for nearly 60 years,” he said. “He was a scholar, a gentleman, and my mentor and my close personal friend. I miss him every day. He was truly the founding father of the facilities of the Air Force Academy, just as much as Gen. Harmon was the founding father of the Academy in total.”

Arthur Witters Jr., son of Col. Witters, briefly spoke for the family members who were in attendance. He said he was overwhelmed by the many people who showed up to honor his father.

Family members and Gen. Clark then unveiled an artist conception of the new sign that will be installed in front of the Col. Arthur G. Witters Civil Engineering Building.

At the conclusion of the ceremony, Lt. Col. Jeremy Oldham, the current base engineer and the commander of the 10th Civil Engineer Squadron, thanked everyone for attending.

“There are many heroes within the proud history of the Air Force whose stories and contributions are not known today by many of their beneficiaries,” Oldham said. “We hope to right this to some small degree as we honor one of those heroes. Col. Arthur Witters not only answered his nation’s call to serve in a time of war, but it seems he was destined to play a major role in establishing the United States Air Force Academy. It is altogether fitting to honor this hero that built so much for thousands who would come after him.” 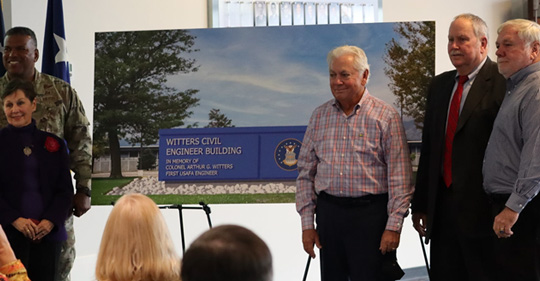 View more photos from the ceremony