“I can’t say enough about the character and humility of Gen. Scott, a man who was a personal inspiration to me and had a direct impact on my life and career path,” says Lt. Gen. Richard Clark ’86, USAFA superintendent. “He was my superintendent, and when an injury put pilot training in doubt for me, he intervened to ensure that I could continue to follow my dream. That was the kind of person he was — a selfless leader who set an example I have tried to follow. He inspired so many and will be dearly missed by our entire community.”

Upon graduation from the U.S. Military Academy in 1950, Gen. Scott commissioned into the Air Force, completing his pilot training at Craig Air Force Base, Alabama. His flying career was highly accomplished. He flew the P-51 Mustang, his first operational aircraft, in combat during the Korean War.  He also saw combat experience in Vietnam. In all, he accumulated 5,300 flying hours in more than two dozen aircraft, including the aforementioned P-51 as well as the F-80, F-86, F-15 and F-16.

Gen. Scott’s record of leadership proved to be even more impressive. Before becoming the superintendent of the Air Force Academy, he commanded at all levels, including the Alaskan Air Command.

Even with all those achievements, however, it was at the Air Force Academy where his leadership arguably had the most profound and lasting impact. He assumed command of USAFA on June 16, 1983.

A year into his superintendency, Gen. Scott faced a major honor investigation — a Physics 411 exam had been compromised. He acted decisively, suspending the cadet-run honor system, instead temporarily placing enforcement under the Uniform Code of Military Justice (UCMJ). He also instituted a three-month amnesty period for those cadets who had committed honor violations that had previously gone undetected. Amnesty allowed Academy officials to get a more accurate picture of the state of the Honor Code in the Cadet Wing. Finally, he established a review committee to study the Academy system. Among the changes that resulted from Gen. Scott’s actions was the addition of the Honor Oath to the code, under which cadets would pledge to do their duty and live honorably. Six months after its suspension, administration of the Cadet Honor Code returned to the cadets, where it has remained ever since.

By all accounts, Gen. Scott is remembered as a highly engaged, hands-on leader. Militarily, he played a key role in expanding soaring opportunities, permitting more cadets to experience the thrill of flying. Academically, he oversaw the implementation of a program to furnish all cadets with personal computers,  providing connections with the faculty through the local area network. A football player at West Point, he avidly supported Falcon athletics, attending countless events and practices.

Speaking of hands-on, as the Academy newspaper reported on Nov. 9, 1984, “at touchdown on his fifth jump, General Scott, 56, became the oldest Air Force senior officer to complete the Department of Defense basic free-fall parachute course.”

While superintendent of the Air Force Academy, Gen. Scott made good use of his West Point Class of ’50 network. Fortuitously, during most of his tenure in Harmon Hall, his classmate, Gen. Charles Gabriel, served as chief of staff of the Air Force. While, of course, Gen. Scott never took undue advantage of that relationship, the needs and wants of the Academy were well-known in Washington, D.C.

Gen. Scott passionately advocated for USAFA’s international programs, and another of his West Point classmates served as a shining example of the benefits of international cooperation. While he was the superintendent, his classmate, Fidel Ramos, served as the president of the Philippines. Gen. Scott frequently highlighted that fact, a virtual best-case scenario for cadet international exchange programs.

Gen. Scott also played an instrumental role in cultivating the Academy’s relationship with Col. (Ret.) Joseph and Dorothy Moller. Arizona Senator Barry Goldwater introduced the World War II pilot and his wife to Gen. and Mrs. Scott, and the friendship blossomed. The Mollers returned to the Academy often and would later execute the largest estate gift in the history of the Academy.

The following year, in April 1998, the Academy showed its appreciation for Gen. Scott’s service by naming the conference room in the Barry Goldwater Visitor Center in his honor.

Even after retirement from active duty, Gen. Scott continued to serve, including as president of New Mexico Military Institute (NMMI) from 1990 until 1996. His performance was such that, on Oct. 20, 2000, the NMMI Hall of Fame enshrined him. The Roswell, New Mexico, preparatory school also made him an honorary alumnus.

Two years later, he received a similar tribute from the Air Force Academy. On Nov. 2, 2002, the Association of Graduates’ Board of Directors selected Gen. Scott as an Honorary Member. Such recognition is extremely rare, as honorary membership is limited to 25 living persons, and must be unanimously approved by AOG Board directors voting by secret ballot.

“Lt. Gen. Winfield ‘Skip’ Scott will be sorely missed by all who knew him, but his legacy is secure and will endure for generations to come,” says Lt. Gen. (Ret.) Mike Gould ’76, chief executive officer of the Association of Graduates and Air Force Academy Foundation and the 18th USAFA superintendent. “His tremendous achievements will continue to benefit our Academy, the Air Force, and the nation he loved so much. We will keep his family in our prayers during this difficult time.”

Gen. Scott built his life and career on a rock-solid foundation. Guiding his every action were his two top priorities, family and faith. The devotion that shaped his life and his service extended to all four of the Academy’s pillars — academic, military, athletic and spiritual.

Perhaps nothing better exemplifies his joint commitment to family and selfless service than the fact that 10 of his family members followed in his footsteps by serving in the military: four sons, four grandsons, and two of his sons’ spouses.

“There was not another person we know more devoted to his faith, his family and our nation through the United States Air Force than our father. Not a morning or evening went by that he was not praying with mom, even after she passed away, for our family. In the last few days since he went to heaven to be with mom, we have learned more from his friends, of all ages, all over the nation expressing their gratitude for his faith, his leadership and how he never wavered from his values. He had an influence and impact that will be with us for a very long time, if not forever. We will miss him but we also know, because of our faith, we will meet again.” 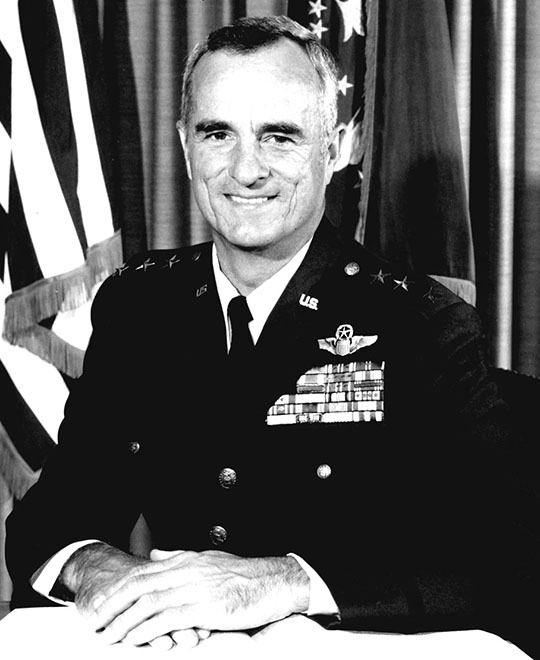