Avid bicyclist Mick Rosenblatt ’70 had big plans for his 70th birthday on March 2, 2018. He hoped to celebrate the milestone by completing a 70-mile ride from Waco, Texas, to the home of USAFA classmate Steve Heyroth in Hamilton, Texas. 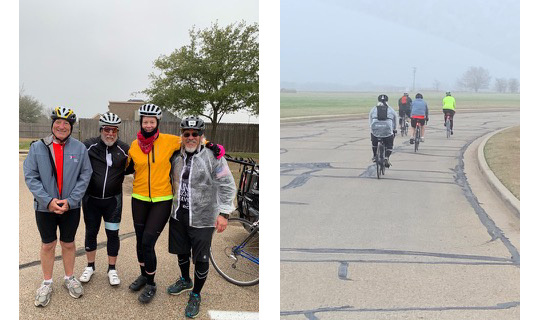 Mick’s Memorial Ride gets started with rain and 40-degree temperatures greeting them.

But on the morning of Feb. 10, 2018 — during training for his upcoming birthday ride — Mick passed away from cardiac arrest while in the saddle of his bicycle.

A year later, Rosenblatt’s wife — Donna Kocian Rosenblatt — and several of her husband’s USAFA classmates and friends decided to complete the 70-mile bike ride that Mick had failed to complete the year before. Donna, however, had never been a cyclist.

As March 2, 2019, approached, Donna diligently trained on Mick’s bike and worked on her endurance.

“For two months, I ate, slept and breathed cycling,” she reports.

At the conclusion of the ride, the group had traveled 71.34 miles. “Appropriate since Mick would have been 71 that day,” Donna says. “It was a quiet and tearful ending for me, with a sense of accomplishment that I was able to complete this for my husband.”

A dinner was held later that day to pay tribute to Mick and the impact he’d had on so many people. Many Class of 1970 classmates were in attendance for the meal.

Mick’s Memorial Ride gets started with rain and 40-degree temperatures greeting them.