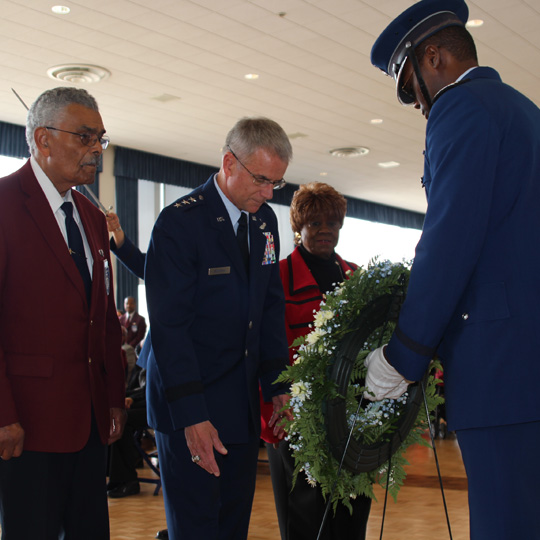 Lt. Gen. Jay Silveria (center), USAFA superintendent, was joined by Frank Macon (left) and Peggy Shivers as they laid a wreath in honor of the Tuskegee Airmen’s historic service and sacrifice. 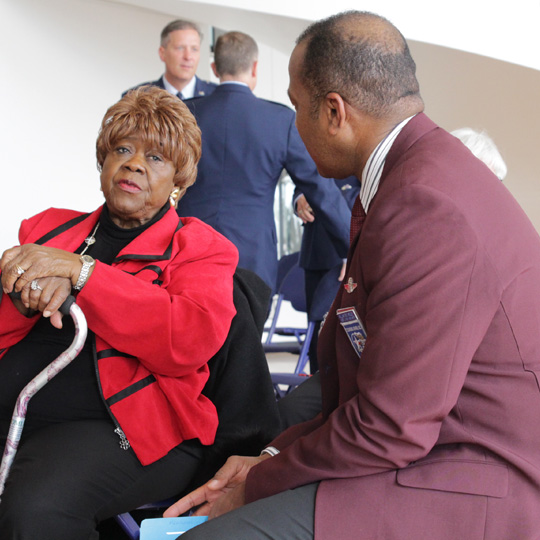 With an original Tuskegee Airman in attendance, the Air Force Academy paid tribute Wednesday, May 2, to the band of heroic African-American aviators who served during World War II.

Tuskegee Airman Franklin Macon, a Colorado Springs native, was on hand for the annual event, which culminated in the laying of a memorial wreath at the foot of the Tuskegee Airmen statue in the USAFA Honor Court.

Macon first learned to fly at Pine Valley Airport, just north of Colorado Springs. Pine Valley sat on the site of what is now the U.S. Air Force Academy Airfield.

Macon enlisted in the U.S. Army Air Corps in 1943 and began his military flight training in 1944 as part of Tuskegee’s class 45A. He went on to fly everything from the bi-wing Stearman, the Piper Cub and the PT-6 Texan.

In 1985, accomplished artist Clarence Shivers was commissioned by the Hubert L. “Hooks” Jones Chapter of Tuskegee Airmen to sculpt a life-sized statue as a memorial to all Tuskegee Airmen. It was unveiled in 1988 and now is on display at the Academy.

“Tuskegee Airmen” refers to all who were involved in the Army Air Corps program to train African-Americans to fly and maintain combat aircraft. At a time of racial segregation in the military, the Tuskegee Airmen answered the call to arms and flew a total of 1,578 combat missions during the war. They flew fighters on ground attack and bomber escort missions over North Africa and Europe. Approximately 150 Tuskegee Airmen lost their lives while in training or on combat flights.

The day’s tribute was hosted by USAFA’s Way of Life Committee and the Commandant of Cadets Brig. Gen. Kristin Goodwin ’93.

After the ceremony — which was moved indoors due to weather — a luncheon was served in the Arnold Hall ballroom.

Lt. Gen. Jay Silveria (center), USAFA superintendent, was joined by Frank Macon (left) and Peggy Shivers as they laid a wreath in honor of the Tuskegee Airmen’s historic service and sacrifice.