Space leaders come together to grapple with workforce challenges

Leaders from the Space Force, Space Command, Department of Defense, education and defense industry gathered Thursday, Nov. 12, at Doolittle Hall for a wide-ranging discussion about workforce development needs for the emerging space and cyber career fields.

Titled the “Space Force Workforce Development Roundtable,” the event was coordinated by U.S. Rep. Doug Lamborn (R-5th District Colorado) and his staff. In the audience were a number of USAFA graduates and many others involved in the space industry today.

Gould reminded the group of the significance of the AOG’s building’s namesake — Jimmy Doolittle — and how his 18 April 1942 raid on Tokyo, just four months after the attack on Pearl Harbor, led to the formation of the United States Air Force as a separate service.

Gould then left the group with the thought-provoking question.

“I ask you today, who will be the Jimmy Doolittle of our nation’s new Space Force and what act or acts of heroism will he or she be remembered for?” he asked.

Lt. Gen. Richard Clark ’86, USAFA superintendent, followed with a brief overview of the institution’s efforts to become the new Space Force’s key officer commissioning source for now and into the future.

Col. Luke Sauter ’02, permanent professor and head of the Astronautics Department at USAFA, outlined the many courses, research opportunities and programs geared specifically toward the development of future space leaders.

Over the course of several hours, attendees talked about the ongoing challenges of finding and retaining capable workers for the important space mission — both in the military and in the civilian sector.

Many in the room emphasized that recruitment of future employees needs to begin early, with school curriculum and science, technology, engineering and mathematics (S.T.E.M.) programs developed and implemented in elementary and middle schools.

Others noted that civilian universities and technical schools need to be part of the solution to identify and emphasize the many opportunities that exist in the space and cyber realms, beyond just someone becoming an astronaut.

Many industry representatives noted the importance of strong internship programs as well. Many indicated their willingness to offer expanded internship opportunities to students to help develop that critical workforce of the future.

All in attendance seemed to agree — if education, the military and industry can partner well together, Colorado Springs could solidify itself as the “Silicon Valley of space.”

Some of the obstacles mentioned, however, include the apparent slow pace of security clearance approvals and the competitiveness among high-tech industries.

When the gathering was over, several USAFA graduates in the room noted they were thankful to be a part of the roundtable discussion.

Lt. Gen. Stephen Whiting ’89, commander of the Space Operations Command at Peterson Air Force Base, said having so many partners in the same room helps tighten relationships between the military, industry and academia.

“Doing this more often would not be a bad idea going forward,” he said.

Whiting said the topic of workforce development is an important one for the Air Force and Space Force.

“Figuring out how we’re going to operate in the face of the threats that other countries are bring to us in space is the warfighting challenge,” he said. “Workforce development is one of those foundational challenges that will help us get after that.”

Maj. Gen. (Ret.) Jay Santee ’81, vice president of strategic space operations at The Aerospace Corporation, appreciated the chance to hear what the military, industry and educational institutions are doing to close the workforce gap.

“Those three entities have to work together for our success in space,” he noted.

He suggested the USAFA graduate community also can play a critical role in encouraging the next generation of space and cyber professionals to enter the field.

“What could our graduate community do to promote STEM?” he asked. “We’re already doing a lot, but what more could we do? We owe it to the nation.”

Lt. Col. (Ret.) John Manney, who works in Government Affairs at Lockheed Martin ’88, said it was exciting to be a part of the roundtable process. He’s hoping to see actual concrete steps taken to address the workforce challenges that everyone is experiencing.

“If you look across the traditional aerospace and defense industries, the workforce is fairly old,” he explained. “It’s a big issue across the industry. We want to get that younger blood — that younger talent — to help replace some of the people who are starting to look toward retirement.”

The aerospace defense industry is facing some stiff competition, however, from the likes of Google, SpaceX, Facebook, Twitter and others. “We’re all going after the same talent,” he noted.

Kevin Runyon ’02, director of vehicle systems development at United Launch Alliance, said the day’s discussion was important for the nation’s ongoing security and prosperity. He looks forward to being a part of continuing discussions about workforce solutions.

“There are a lot of things that are already in motion in terms of that public-private partnership between the Air Force, the Space Force and companies within industry, and in terms of internships with universities both locally and across the country,” he said. “We’re providing top-notch experiences for folks to get in on the ground floor and understand what this industry is all about.”

Congressman Lamborn said he appreciated all who attended the valuable roundtable discussion.

“Today was a significant event for the future of our country’s national security space enterprise,” he said. “Senior leaders from our space warfighting institutions, defense industry and education came together to discuss concrete steps to ensure our community is producing the workforce needed to support the Space Force, Space Command and the industrial base that supports them.”

He said the roundtable began the task of coordinating efforts “to provide a robust pipeline of highly trained personnel from across the Pikes Peak Region and all of Colorado.”

“I believe it was a tremendously successful event, and I look forward to acting on some of these great ideas and expanding participation throughout the state,” he added. 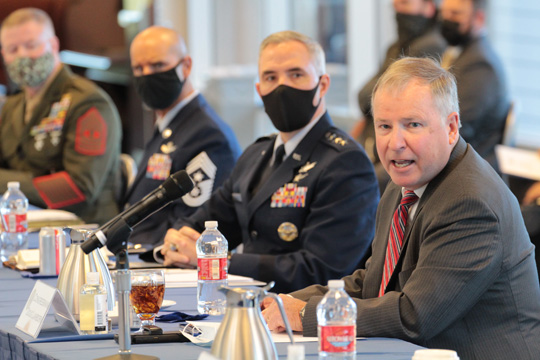 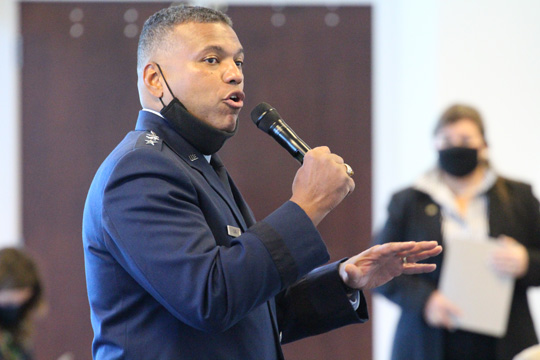