The United States Air Force Academy has officially welcomed the 20th superintendent in its 63-year history. 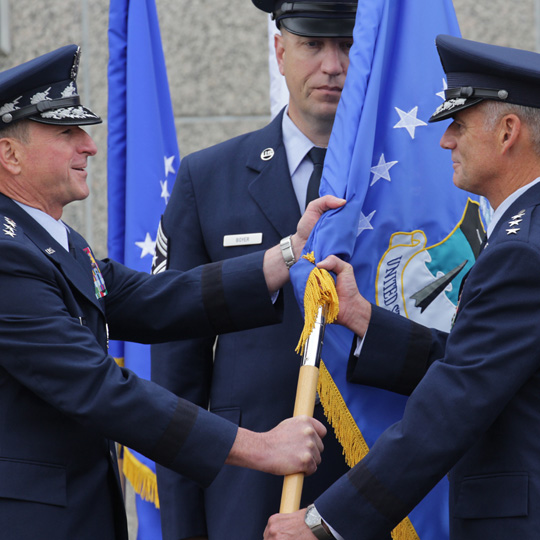 Chief of Staff of the Air Force Gen. David Goldfein ’83 was on hand for the ceremony in front of the Class Wall on the Terrazzo. He first presented Johnson with the Distinguished Service Medal and then officially retired her from the Air Force. Johnson had a 36-year Air Force career.

Then Gen. Goldfein transferred command from Johnson to Silveria.

“For the last four years, our Academy has been under the steady hand of Lt. Gen. Michelle Johnson — a trailblazer and an extraordinary leader,” Gen. Goldfein told the assembled crowd. “It’s certainly been an unforgettable ride for a farm girl from Iowa who shot for the stars. It is a uniquely American success story. We all stand a bit taller, Michelle, having known you and learned from you.”

He singled out for praise some of Johnson’s many accomplishments during her tenure, including a strong cultural diversity program; a re-energized sexual assault prevention program; business and community partnerships; the launch of Cyberworx; and construction of Polaris Hall.

Gen. Goldfein thanked the outgoing superintendent for her service as a combat pilot, Air Force commander, NATO leader and educator.

“The Air Force and our Academy are better today because of your unlimited dedication and your dynamic leadership,” he said. “The legacy you leave behind is implanted forever in the graduates and these cadets that you have prepared to lead.”

Johnson took the opportunity to thank the Cadet Wing, the mission support element, her staff and her supporting civic/business partners for the progress that they all made possible over the past four years.

“It has been my phenomenal honor to serve as the superintendent,” she said. “This is a hard thing to give up. I loved this. This has been the capstone opportunity of my professional life.”

But, she noted, many challenges remain ahead and she pledged to continue to help the Academy reach its full potential.

“The Academy is wonderful,” she said. “But it’s a wonderful flip phone, but we need to be a great smart phone. And we’re about ready — and, Jay, you’re going to take us there.”

Silveria, with many family members and friends in attendance, was met with a rousing response from his fellow Class of 1985 classmates when first introduced as the new superintendent.

“I promise to represent our class well,” he said.

He applauded the innovation and transformation that Johnson had accomplished over the past four years.

“Your leadership and guidance over your time here was impressive,” he said. “It’s a privilege — if not daunting — to follow you and all the great work you’ve done.”

Directing his comments to the Cadet Wing in formation in front of him, Superintendent Silveria challenged the future Air Force leaders to follow the example of USAFA graduates before them by serving well even when things get tough and striving for perfection in all things.

In closing, Silveria chocked back tears as he recalled the death of his father, a retired master sergeant, who died just this week.

“I take very seriously the notion that you must be prepared to lead men and women like my father,” he told the cadets. “I will be ever mindful that you are developing to be those leaders — to first stand next to me and then to replace me.”

A reception for the new superintendent and his family was held in Arnold Hall following the Change of Command Ceremony.

Silveria is a command pilot who flew combat missions over Iraq and the Balkans. He has logged more than 3,900 flight hours in a variety of aircraft, including the F-15 and F-35.