Call it a USAFA miracle, because there’s no other way to describe it.

This past winter, Glenn Wilcox of Louisville, Colorado, was enjoying an off-road adventure in the nearby mountains when his vehicle got stuck in a pile of snow.

Try as they might, Wilcox and his friends couldn’t shovel the vehicle from the snow. He returned later with a jack to finally accomplish the job.

In the midst of his rescue attempt, Wilcox happened to kick up some rocks on the ground. Out of the corner of his eye he caught a glimpse of a gold ring.

“It was pretty nuts,” he admits. “It was three miles from a paved road.”

Upon closer inspection, Wilcox determined it was a United States Air Force Academy ring from 1965 and it belonged to a John D. Ryan.

“There was so much history behind the name. It was crazy,” he says. “I found a piece of history.”

Wilcox reached out to the Association of Graduates at USAFA and talked with Michele Cowan, AOG customer service supervisor, to see if he could find out more information. He discovered that the ring’s owner — John D. Ryan II — died at the age of 29 on Jan. 12, 1970, in a training crash near Hamilton Air Force Base California.

But his widow, Martha Ryan, was still living and her contact information with the AOG was up to date.

“We were on our honeymoon when he lost his ring,” Martha remembers. “It’s pretty amazing that it’s been found.”

Wilcox is now Facebook friends with John D. Ryan III, who was just 2 years old when his father passed away. Wilcox recently shipped the ring to the Ryan family, and John Ryan III now has possession of the keepsake.

“It just kind of eerie and weird,” she admits. 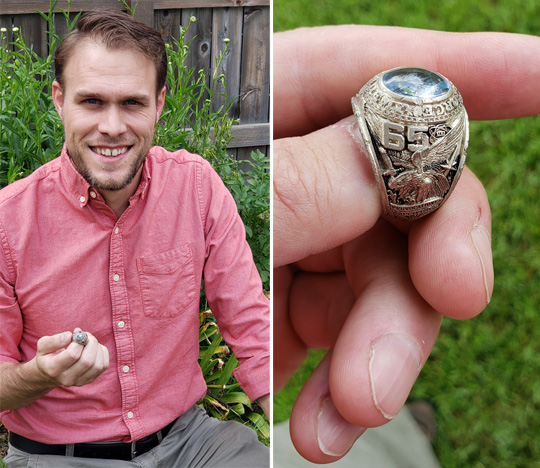