Donors Give a Record $51.7 Million in Support of U.S. Air Force Academy Mission

Donors made 2022 a record year of philanthropic support for the United States Air Force Academy. More than 7,500 graduates, parents, families, foundations and corporations contributed $51.7 million through the Air Force Academy Foundation to support a wide range of Academy initiatives.

This generosity supporting the Academy's mission, cadets and programs brings the total philanthropic investment in the Defining Our Future comprehensive campaign to $248.26 million. Publicly launched in 2021 by the nonprofit Air Force Academy Foundation and Association of Graduates, the campaign focuses on raising private philanthropy in support of the USAFA mission and boosting engagement, pride and participation among graduates and families.

While the federal government and the U.S. Air Force provide adequate funding for the Academy’s core needs, private support from donors is required to enhance the educational and leadership opportunities necessary to fully develop future officers for the Air Force and Space Force.

Philanthropy created impact across the Academy throughout 2022, including:

“In 2022, graduates, parents, families and other Academy friends showed up in a historic way in supporting, through their generous giving, the 4,000-plus cadets at USAFA,” said Lt. Gen. (Ret.) Mike Gould ’76, CEO of the AOG and Air Force Academy Foundation. “Donors are inspired by USAFA cadets. These young leaders could have taken an easier path with their higher education, but they chose to serve and defend our nation. They came to USAFA to develop as leaders of character dedicated to our core values: Integrity First, Service Before Self and Excellence In All We Do. Every donor and every contribution help advance the mission, and we thank all who have made a difference.”

Mark Hille ’97, president of the AOG and Foundation, said that, while the Defining Our Future campaign raises substantial private support for the Academy’s mission, it has other goals as well.

“The campaign creates opportunities for graduates, parents and families, and supporters to help advance USAFA’s excellence,” Hille said. “It’s a way graduates and friends can feel vitally connected to the mission — to know they are supporting USAFA cadets in developing into the leaders of character our Air Force and Space Force require. Those connections are happening in several ways — membership, annual support, reunions, class giving, mentorship, sponsorships and events — and they all matter and make a difference. We look forward to expanding and enhancing those opportunities in 2023 and beyond.”

“Raising an additional $15 million for the Falcon Stadium modernization, a partnership with the Air Force Academy Athletic Corporation, is a top priority,” she said. “We’re excited by the strong interest in supporting the project. It’s a key investment not only in Air Force athletics and enhancing the fan experience, but also in boosting the stadium as the Academy’s front door for the community — all working to support the USAFA mission.”

Banet pointed to the continued development of the Academy’s Institute for Future Conflict; key capital projects, including the planned static display at Davis Airfield in memory of the Tuskegee Airmen, the Hosmer Visitor Center and the Madera Cyber Innovation Center; and boosting participation through expanded class and annual giving as additional strategic priorities for the last 24 months of the campaign.

To learn more about the campaign, visit DefiningOurFuture.org. 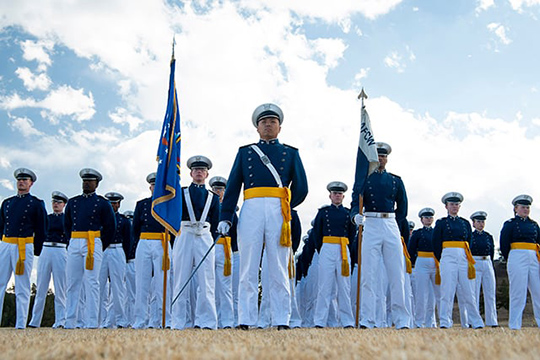