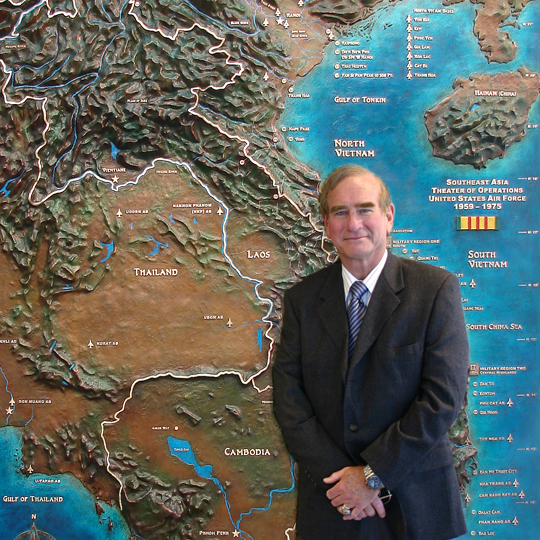 Jim Nance ’71 is pictured next to the map he created inside the Southeast Asia Pavilion adjacent to Doolittle Hall.

“By far, this is the biggest project in which I have been involved, especially in the planning and approval process,” he says. “I am humbled and honored to have been selected for this project and strongly feel it is an opportunity to make a lasting contribution and honor the members of our military, especially those who participated in Desert Storm.”

Under the direction of the National Park Service and the Capitol Fine Arts Commission, the proposed six-acre memorial will be located on the Capitol Mall at the corner of Constitution and 23rd (to the north of the Lincoln Memorial and to the west of the Vietnam Memorial).

The National Desert Storm War Memorial was conceived almost 10 years ago by a group of Desert Storm veterans from all services. Since that time, volunteers have worked with several national architectural firms, members of Congress, the National Park Service, and the Capitol Fine Arts Commission to move the process forward.

Nance and Army veteran Robert Eccleston will soon begin work on the memorial’s art concept and design, ultimately leading to the production of monumental bronze sculptures.

“At this point, we are still discussing options and compositions, which will complement the memorial and meet with the oversight of the National Park Service and Capitol Fine Arts Commission,” Nance says. “I would anticipate beginning sculpting next year, with a tentative estimated completion date in three years.”

Nance served in Vietnam as a C-141 pilot and had left the Air Force prior to Desert Storm. But he is thrilled to be part of the new memorial project.

Nance, who has a number of sculptures at the Air Force Academy, recently dedicated a nine-foot-tall bronze Vietnam Pilot for the Vietnam Veterans and Air War Memorial in Seattle at the Museum of Flight and also has recently completed in clay the Robin Olds sculpture for the Class of 1971 Air Warrior Combat Memorial under construction near the North Gate behind the B-52.

“I am eternally grateful to USAFA, the Association of Graduates, the classes of ’70, ’71, and ’65, and numerous other grads such as Gen. Ron Yates who have encouraged and supported me in the pursuit of this new second career of monumental sculpture,” he says. “I could have never imagined where this journey would take me, but I absolutely know, without the incredible support of fellow grads, I would still be playing with clay as a hobby.”

For more information about the project, visit www.ndswm.org.

Jim Nance ’71 is pictured next to the map he created inside the Southeast Asia Pavilion adjacent to Doolittle Hall.