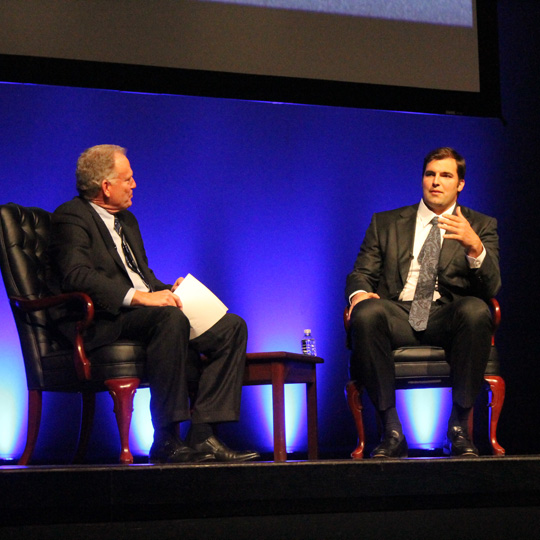 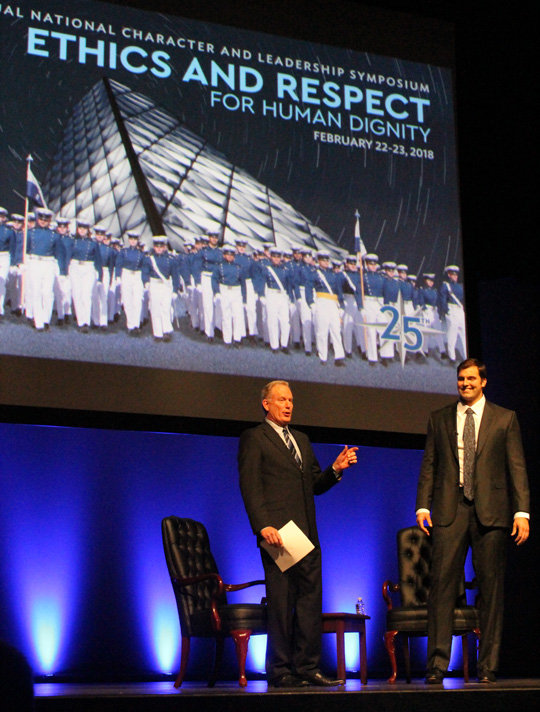 The event continues Thursday and Friday, with national and international speakers scheduled to speak on the theme of “Ethics and Respect for Human Dignity.”

Alejandro Villanueva, offensive tackle for the National Football League’s Pittsburgh Steelers and 2010 graduate of the United States Military Academy (West Point), was the keynote speaker for the first evening.

Villanueva said he was disappointed to learn that he was staying at the Falcon Lodge while at USAFA. He had hoped to stay in the dorms with cadets, reliving his time as a West Point cadet.

Villanueva told the crowd that, upon graduation from West Point, he was worried that he’d miss his opportunity to go to the Middle East — as it seemed like the wars in Iraq and Afghanistan were winding down at the time. He surrendered all his leave, finished Ranger School and Airborne School and was immediately deployed to Afghanistan.

Just three weeks later, his platoon would be ambushed and numerous soldiers were shot. One private eventually died from his injuries.

Villanueva said he developed such a strong bond with his platoon members that he learned an important lesson through the combat experience.

“You don’t want to let anybody down,” he said. “I cared more about them than my own life.”

Villanueva would go on to be a captain in the Army Rangers, serving three tours of duty in Afghanistan. He was eventually decorated with a Bronze Star for valor.

Villanueva deflects any credit for his actions that led to his Bronze Star medal, saying it was a team effort. “Any of my guys would have done the same thing,” he told the crowd.

Villanueva told USAFA cadets that they should take seriously their role in the future fight, noting that a time will soon come when they will be called upon to make important decisions that have serious consequences.

“Putting others in front of you,” he said, “that’s the beauty of teamwork.”

After five years in the military, Villanueva left and went to business school. He decided to try out for an NFL football team to help pay the bills.

Villanueva signed his first professional football contract with the Philadelphia Eagles in 2014 but was later cut from the squad. In 2015, he signed with the Steelers and has since become the team’s starting left tackle. At the end of the 2017 season, Villanueva was selected to participate in the NFL Pro Bowl.

In September of last year, Villanueva made headlines when the Steelers decided against taking the field for the national anthem in an effort to avoid getting caught up in the national controversy over players kneeling in protest. Villanueva was the only player to appear for the national anthem, standing at the tunnel entrance while the rest of the team remained in the locker room. Days later, his jersey would become a best seller among NFL memorabilia buyers.

Villanueva told the crowd he didn’t set out to shine the spotlight on himself. He said he respects the views of people on both sides of the national anthem debate.

The question and answer session for the night was moderated by Wayne Hagin, television sportscaster for such professional baseball teams as the Oakland Athletics, Chicago White Sox, Colorado Rockies, New York Mets and St. Louis Cardinals.