Col. (Ret.) Robert Munson ’73 was honored with USAFA’s 2021 Distinguished Service Award at a ceremony in the Arnold Hall Ballroom Nov. 1. He was recognized for his outstanding service and unwavering support to the United States Air Force Academy. Superintendent Lt. Gen. Richard Clark ’86 presented the award to Munson.

Col. Munson has been involved in multiple volunteer roles at the Air Force Academy during the past two decades. He’s the 22nd individual or group to be presented the Distinguished Service Award, which has been in existence since 1999.

Munson and his wife, Pam, became Red Cross volunteers in 2004 and trained to support the Services to the Armed Services Branch. He has since volunteered in the USAFA emergency room (before it closed), Internal Medicine Clinic, Cadet Clinic and other places needing augmentation.

Through his dedication to the 10th Medical Group, he proposed and then executed the volunteer plan for USAFA COVID vaccinations. Col. Munson recruited more than 240 volunteers for 22 mass vaccination events that provided 16,000 shots to the USAFA community.

“Remember, at that time in January 2021, over 3,000 Americans were dying every day,” Munson notes. “And the volunteers were largely in the age demographic most at risk, and they weren’t vaccinated at the time. Yet they ran toward the fire to help knowing the risk in the best tradition of service before self.”

Since 2006, Col. Munson also has served as a volunteer for the National Character and Leadership Symposium (NCLS), leading the Class of 1973 as the flagship sponsor for this event and spearheading the effort to recruit alumni volunteers and numerous high-profile speakers.

As a key member of the Class of 1973 Gift Committee, Col. Munson planned and executed two highly successful fundraising drives raising $1.8 million for NCLS and the Class of 2023 Legacy Program.

Additionally, Col. Munson has served the Cadet Wing as a Squadron Professional Ethics Advisor for Cadet Squadron 26. He was declared the Senior Honor Mentor of the Year for counseling as many as four cadets on probation at one time.

Finally, Col. Munson served as a senator and secretary of the Association of Graduates’ Class Advisory Senate, and he served on the AOG board of directors for four terms.

Munson says it’s a great honor to be recognized for something he loves to do.

“Pam and I are volunteer junkies, and we do it for the great feeling you get when helping others,” he says. “I call it 'psychic pay' — not an original term. And to be honored this way is a huge psychic pay bonus.” 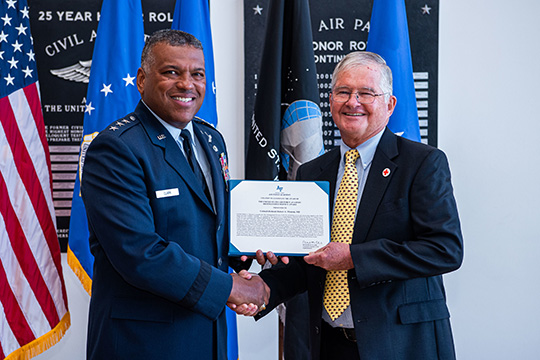