A total of 1,170 Basic Cadets marched back from Jacks Valley this morning, bringing an end to the USAFA Class of 2022’s Basic Cadet Training. 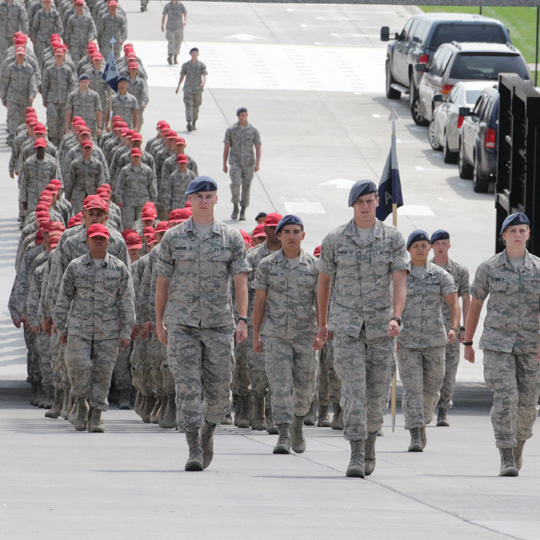 The Class of 2022 assembled on the Terrazzo — in front of family members and friends — to hear encouraging words from Commandant of Cadets Brig. Gen. Kristin Goodwin ’93.

“It’s outstanding to see each and every one of you back here on the Terrazzo,” Brig. Gen. Goodwin said. “The last six weeks was designed to be tough, and it challenged you in ways that you’ve never been challenged.”

She congratulated the Basic Cadets on surviving Jacks Valley and returning for the start of the academic year.

“Today, 1,170 of you have left the dust of the valley and come back up here to The Hill to the marble strips, to your new home for the next four years,” Brig. Gen. Goodwin said.

She urged the Basic Cadets to carry with them the memories of Jacks Valley and to draw upon those lessons when needed.

Goodwin also took the opportunity to thank the cadre and permanent party personnel who made this year’s Basic Cadet Training a success.

“Class of 2022, welcome to the team. Every single cadre, every single cadet, every single graduate went through Jacks Valley,” Brig. Gen. Goodwin noted. “They crawled through the mud and endured what you endured. That’s part of the Long Blue Line. And we want to welcome you.”

At the conclusion of Brig. Gen. Goodwin’s remarks, the cadre presented an Airman’s Coin to each of the Basic Cadets to signify their transition to fourth-class cadet.

“As you hold it, remember that each one of us are part of something bigger than ourselves,” she said. “Think about the heritage, the history, the sacrifice and the strength of all of those who preceded us. Those that serve today and those who serve after us.”

Outstanding basics for the Class of 2022 were recognized as part of the ceremony.

One cadet from each Basic Squadron was honored and were presented a Commandant’s Merit Pin.