The 10th Air Base Wing said goodbye to one leader and greeted another at a Change of Command ceremony Friday, June 18.

He called Hartless an “unflappable, humble” leader of “Team 10” over the past two years. During his tenure, Hartless and his team launched 92 major projects valued at $1.2 billion.

Clark noted that Hartless led well through challenging circumstances — not the least of which was a global pandemic. He reported that the wing conducted more than 57,000 COVID tests and administered more than 19,000 vaccines into arms over the past year and a half.

“Because of this, USAFA has led the Air Force in the percentage of fully vaccinated military personnel at any base,” he said.

Clark said he was proud of Hartless and the entire wing for its efforts during this challenging period.

“Today, we bid farewell to somebody who has been a trusted teammate and a wingman through it all,” he told the crowd.

Prior to relinquishing command, Hartless thanked his 10th ABW teammates and called his role as commander “the most challenging and rewarding assignment of my career.”

Hartless called the 10th ABW personnel the “most unstoppable team I’ve ever served with.”

“We demonstrated to our potential adversaries that even a global pandemic could not stop the men and women of Team 10 and Team USAFA,” he said. “Every day I came to work, I felt I was part of an all-star team.”

In welcoming Leonard to his new role, Clark said he’s convinced the new commander will capably carry on the legacy of strong leadership at the 10th ABW.

“Fear not, USAFA,” Clark said. “Though we’re losing an amazing leader, he will be handing off the baton to an equally skilled and talented officer and the race will continue. Col. Chris Leonard is the perfect man to run the next leg of the race.”

Leonard thanked the crowd in attendance for the special ceremony. Then, directing his attention to his new teammates, Leonard pledged to continue to propel the wing’s mission of supporting the Academy and its Cadet Wing.

“As excited as I am to be on this stage, I am far more excited to get off it, to stand next to you, to work next to you, and to lead you,” he said. “Ensuring the future of our Air Force and the security of our nation is a team sport. Not only am I a team player, I have a near-fanatical commitment to the very concept. Now it’s time to get it started.”

Leonard comes to the U.S. Air Force Academy from Headquarters, U.S. Air Force in Arlington, Virginia, where he was senior military assistant, Office of the Assistant Secretary for Installations, Environment and Energy.

Hartless has been leading the 10th ABW since 2019 and will be heading to Headquarters, U.S. Air Force. He will serve as deputy director, Resource Integration, Deputy Chief of Staff, Logistics, Engineering and Force Protection. 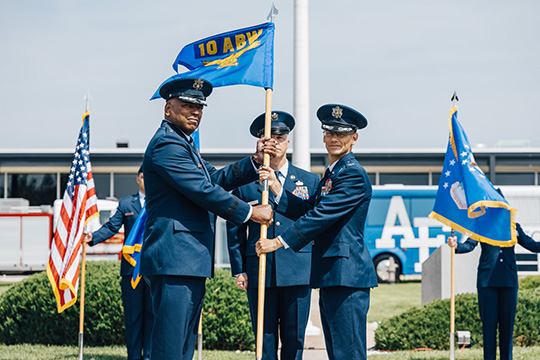 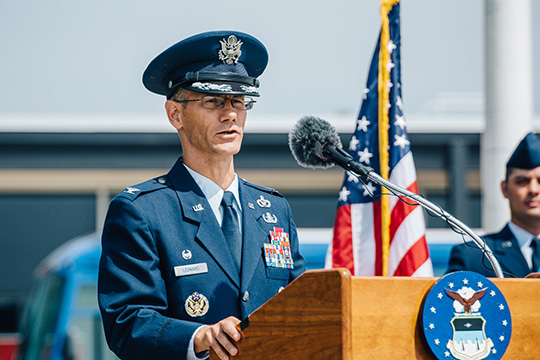