Lacey family celebrates the heroism of a U.S. soldier 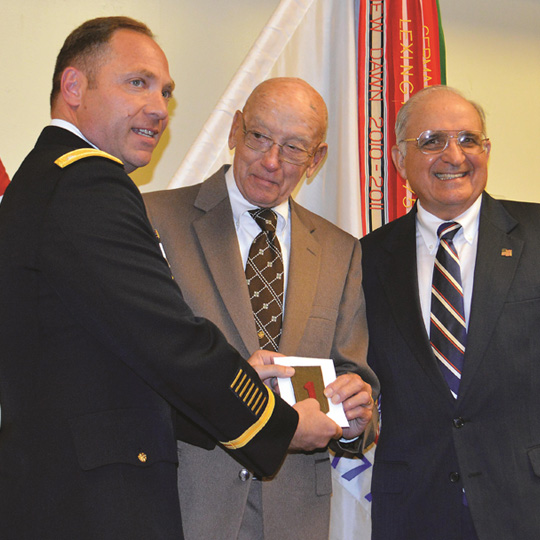 That day, their father — Sgt. Keith N. Lacey — was posthumously recognized for his bravery during World War I. The Lacey family was presented their father’s Silver Star; Purple Heart; World War I Victory Button-Silver; World War I Victory Medal with France Service Clasp and Montdidier-Noyon, Aisne-Marne, St. Mihiel, Meuse-Argonne Battle and Defensive Clasp; Army of Occupation of Germany Medal; French Fourragere; and Lapel Button for Service Prior to 1939 as well as the 1st

Keith Lacey enlisted in the Army one month after the U.S. declared war on Germany in 1917. He would serve honorably until July 1919.

Keith Lacey eventually landed on the shores of France joining the 16th Infantry Regiment, 1st Division. During WWI, he participated in the Montdidier-Noyon Offensive, the Aisne-Marne Counter Offensive, the St. Mihiel Offensive and the Meuse-Argonne Offensive.

Even though he suffered from the effects of an enemy gas attack, Keith Lacey persevered and fought to the end of the war and occupation of Germany.

After returning to the States, Keith Lacey would contract tuberculosis. In 1922, he traveled to Colorado for treatment.

He would eventually move to Colorado Springs, marry Ruth Mathis and together raise eight children. Keith Lacey died on Jan. 22, 1977.

His father’s military service would inspire Nick Lacey to attend the Air Force Academy. He went on to fly the F-105, recording 100 combat missions over North Vietnam. In 1967, Nick Lacey was awarded the Silver Star for his bravery.