‘You can’t tell what’s ahead for you’

Col. (Ret.) Henry “Hank” Hoffman ’63 was invited by the Cadet Wing’s Group 1 to speak about his Vietnam experiences during a Commander’s Call April 25 in Arnold Hall. 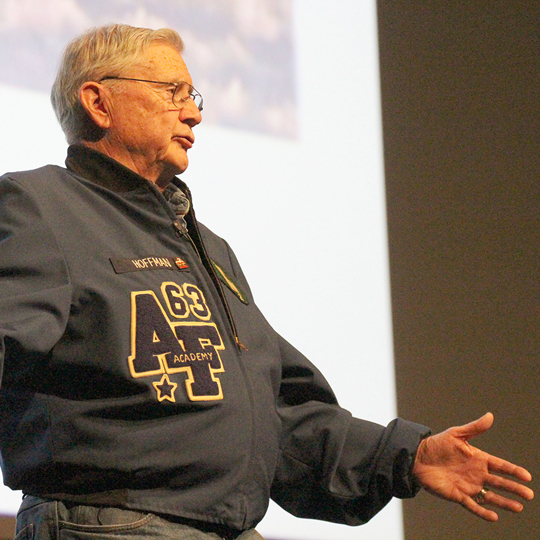 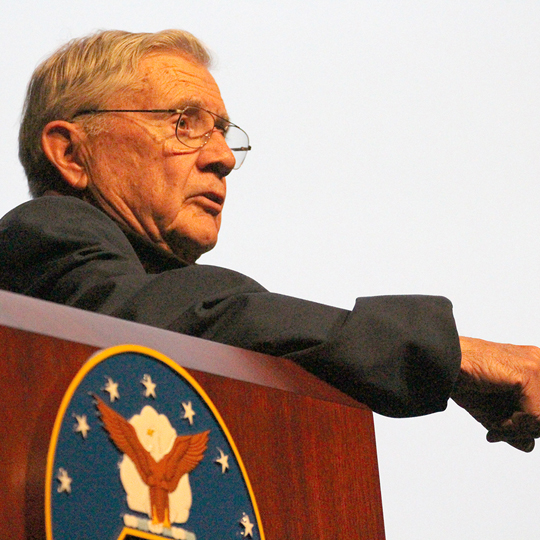 Hoffman clocked more than 10,000 hours in aircraft during his Air Force career.

“I’ve been waiting for 40 years for somebody to ask me about what happened in Vietnam, and you guys get to hear it,” Hoffman told the cadets.

Hoffman opened his presentation by projecting a photograph from 1962, which included 17 members of his cadet squadron. He noted that some of his fellow squadron mates — including Lance Sijan — went on to do great and heroic things. Others would not go on to succeed, however.

“You can’t tell what’s ahead for you,” Hoffman told the cadets, referring to the unexpected career paths that his fellow classmates would follow.

When Hoffman graduated from pilot training in 1964, the nation was not yet fully engaged in Vietnam but was in the midst of the Cold War. Hoffman went on to fly the B-52 — assigned initially to the nuclear mission.

When the Vietnam War ramped up, Hoffman found himself involved in the conflict.

“We were not prepared for this war in the jungle,” he admitted. “We were in the business of delivering nuclear bombs and trying to survive afterward.”

For the most part, Hoffman suggested, the B-52 was “a nasty weapon” but it was “misused in the jungle.”

Hoffman would go on to complete three tours in the B-52.

“Flying bombers was like third grade,” he joked. “It was long and hard and boring, and you didn’t get a lot of credit for it.”

After five years, Hoffman would switch over to the A-37 and provide close air support for U.S. troops. By the war’s end, Hoffman had flown a total of 377 combat sorties.

Hoffman talked a bit about the civil unrest in the U.S. that eventually led to the nation’s withdrawal from Vietnam.

“The protesters had taken away our will to continue,” he said. “Then Saigon fell, and it was all over.”

As he headed to Vietnam for his fourth tour, Hoffman recalled being in an airport while in uniform and a girl spitting on him.

“She thought she was protesting the war, I guess,” he said. “But in fact she was insulting me.”

Hoffman would be upgraded to first-class as a result of the incident.