Two decades after the day that cast the longest shadow in my life and that of countless others, I can write this reflection only because I’m still here — living, breathing, thinking, feeling.

I first learned that the World Trade Center existed as it was crumbling, effacing from the New York City skyline in the most violent of ways. I was 12 years old and lived in Boise, Idaho. For as long as I could remember I had been nestled in a tapestry of subdivisions, shopping centers, and manicured playgrounds and soccer fields.

A cloudless Tuesday morning like any other, my mom drove me to school. She turned the car radio up, her right ear lurching toward the dash as if she was struggling to hear the news. The first tower had collapsed. The reporters announced the news with bewilderment and tragedy; this was not yet understood as an attack.

In art class, my teacher received a call from the principal. He glanced over at me and signaled with a small nod.

“Jennifer, you need to call your mom.” Typical of any kid of the early 2000s, I instinctively dialed the one number I’d had memorized my entire childhood: home. Strangely, I was unworried, a byproduct of pure and unadulterated naïveté.

My mom answered on the first ring. “Jennifer, I’m going to come pick you up from school now. Then we have to get John.”

She had just spoken to my dad who was at that very moment sitting in an A-10, bombs loaded, engines running, ready to takeoff at a moment’s notice. He had very specific instructions for her: go to Costco, buy a month’s supply of water and non-perishable food, pick up the kids, and do not drink the water from the faucet.

Based on the chaos that had just unfolded in his squadron, he reasoned a biological attack might be on the horizon. The blissful unawareness of the morning had evaporated. This was an attack.

Years later, before my first deployment, he confessed to me a somber thought he grappled with during those seven hours waiting on the runway for the launch decision: “It’s the only time I thought I might never see you guys again.”

He came through the front door late that night, face ashen with fatigue but softened by relief. Cases of water stacked to my 8-year-old brother’s height had created an obstacle course leading to the living room where we watched the television beam out horrifying images on a relentless loop.

I’m 33 now. Twenty-one years of life has unfurled along roads of deliberate intention and unplanned detours. We left Idaho and moved to the East Coast. My parents divorced, and as our family disintegrated, the stress of my dad’s final and longest deployment to Iraq surprisingly drew my parents back to reconciliation and girded us all with a new strength.

A few years later, they split up again. The demands of the military was not the causal factor in their demise, but I know it gnawed deeply at their relationship.

I graduated from the Air Force Academy and went on to graduate school where I studied the impact of post-traumatic stress disorder (PTSD) in service members returning from our generation’s long, groaning, costly wars in Iraq and Afghanistan. I went to pilot training and earned my wings from the same base in Columbus, Mississippi, where my dad had graduated 30 years prior.

My younger brother became our family’s third Air Force pilot four years later. I flew exactly 100 combat missions over Iraq and Afghanistan. I reflect on this path that led me to today because I can. Because service looks a little different for everyone, but the motivation is always personal and layered. Because I’m here and so many are not rendered voiceless by their sacrifice.

Just last year, the human cost of the war in Afghanistan stood at 2,448, each life lost an endless echo of pain, futures permanently extinguished. In the waning days of U.S. involvement in Afghanistan, we witnessed yet again the brutal reminder of the vagaries of war: 13 young men and women in uniform killed by a suicide attack outside the Kabul airport. As the last C-17 departed just before midnight, the war in Afghanistan had taken 2,461 of our sons and daughters, brothers and sisters, fathers and mothers.

The count is similarly staggering for the unfinished war in Iraq. Over 20 years, a bevy of military installations grew like roots in the Middle East and southwest Asia, providing support to these two towering and insatiable efforts. At these places too, service members lost their lives. Remembering is all that remains.

As cadets at the Academy, Kelli and I had lived next door to one another. She was funny, quick-witted and never took herself too seriously — although she had serious goals, and I knew two of them: to become a doctor and marry her boyfriend, Jimmy. She did both.

Then, at just 31 years old and full of life and even more promise, Dr. KelliAnn Leli was killed in a non-combat accident while deployed. It was the day after Thanksgiving. Jimmy, my classmate, friend, and a fellow pilot in the tanker community, was deployed at another location in the region at the time of her death.

Watching her memorial services held at both her deployed base and home station, the liminal space between disbelief and reality grew closer, but I still struggle to comprehend that she is gone.

So on this day, especially, remember where you were on that Tuesday in September of 2001. Examine your successes and triumphs, your mistakes and struggles, and the vast expanse of life that has transpired in-between.

Embrace your family and friends and the time you spend in their presence. Appreciate these imperfect 21 years that have elapsed, whether you wear a uniform or not, and recognize what a privilege it is to carry and share your memories into tomorrow. Most of all, remember for those who no longer can.

(Note: This story was originally published on Sept. 11, 2021, in the digital journal Thought to Action, which Walters co-founded with five other military officers. It was part of a reflection series the journal did to commemorate the 20th anniversary of 9/11.) 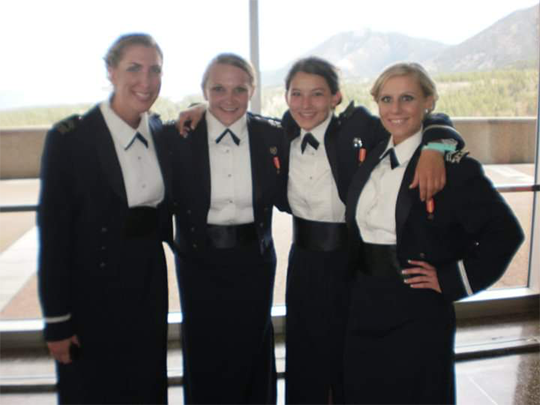 >
From left to right: Cory Wilson, Kristi Miner, myself, and Kelli Leli (nee Seaman). All in CS-18. 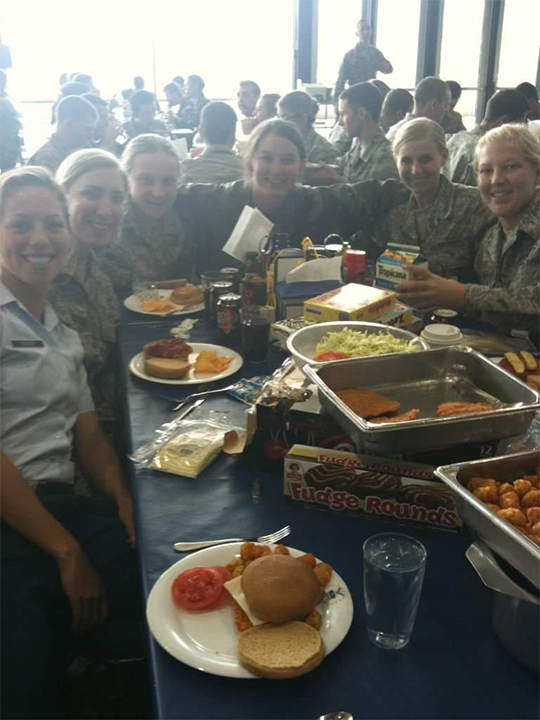