‘There’s a nation … depending on you’

A total of 991 members of USAFA’s Class of 2019 graduated during a commencement ceremony featuring guest speaker President Donald Trump Thursday, May 30. 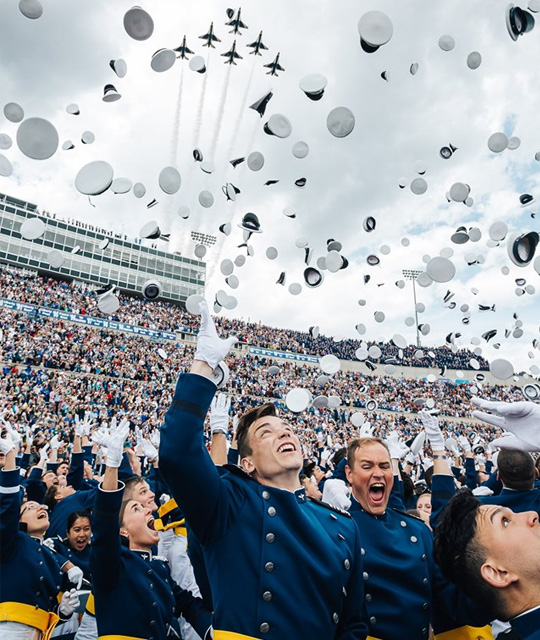 Falcon Stadium was filled to capacity and Colorado weather cooperated for the 19,000-plus family members, friends, USAFA personnel and Academy supporters in attendance.

“I could not have asked for a better wingman,” she said.

Wilson noted that as cadets, 40 years ago, she and Goldfein had no idea what the future would hold for them. She told the new members of the Long Blue Line to be well prepared for whatever opportunities and challenges lie ahead.

Turning her attention to the soon-to-be second lieutenants, Wilson offered some encouraging words.

“There is a nation, outside of this stadium, depending on you,” she told the new graduates. “Thank you for choosing to be airmen.”

In introducing President Trump to the crowd, Wilson lauded Trump’s efforts to reverse a decade of military decline, which prompted loud applause from the crowd.

“His number one priority has been the safety and security of the American people and the country that we love,” she said. “We are privileged to have him here today.”

President Trump was welcomed warmly by the crowd, and spoke for about 30 minutes.

“Today, you take your place as officers in the most powerful Air Force in the history of our country and, frankly and very easily, in the history of the world,” he said. “America commends the integrity, devotion and commitment of the Class of 2019.”

He challenged the new Air Force officers to “break old boundaries, and unlock new frontiers, and live life on the cutting edge.”

President Trump suggested the new officers are uniquely equipped to have an immediate impact in the Air Force.

“That is what your time at this great academy has been all about — preparing you to do whatever it takes to learn, to adapt, and to win, win, win,” he said.

The President took a few moments to call out several Class of 2019 members for special recognition during the ceremony, including USAFA Rifle Team members 2nd Lt. Anna Weilbacher and 2nd Lt. Spencer Cap, who helped the Falcons win the Air Rifle National title.

He called 2nd Lt. Nic Ready up to the stage in recognition of his victory in the College Home Run Derby. President Trump jokingly took the opportunity to check Ready’s arm muscles.

He also called 2nd Lt. Parker Hammond up to the podium and congratulated him on the perseverance he demonstrated as he fought cancer throughout his cadet experience.

President Trump told the new officers that he remains committed to supporting the military, including the continued production of fifth-generation aircraft that will ensure the United States’ dominance in the air. His comments brought shouts of approval from the stands.

President Trump remained on the stage and saluted and then shook hands with each new second lieutenant crossing the stage. He even took a few moments to chat with some of the graduates.

The day’s events were concluded with a performance by the USAF Thunderbirds Air Demonstration Squadron.