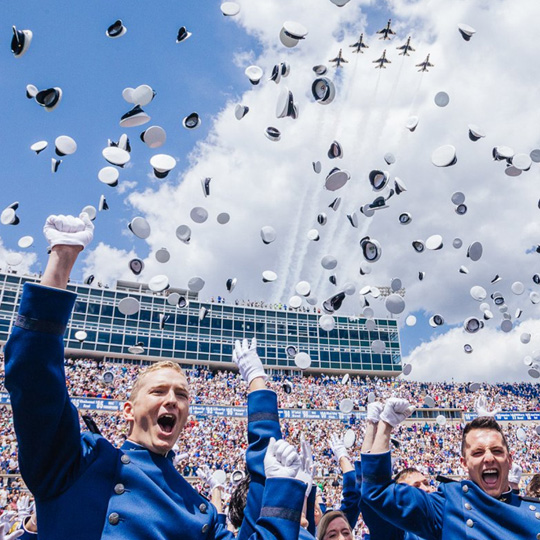 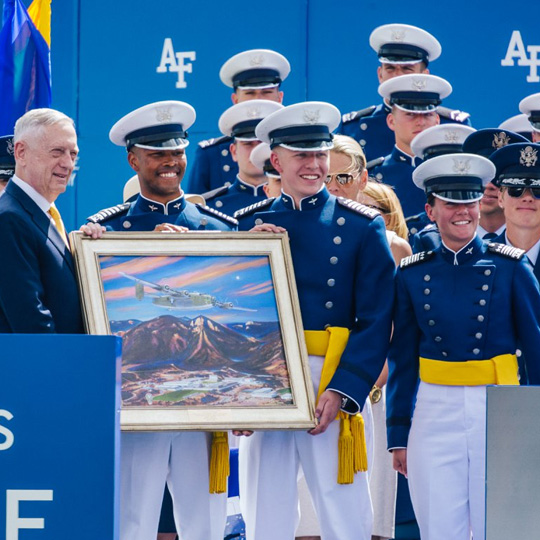 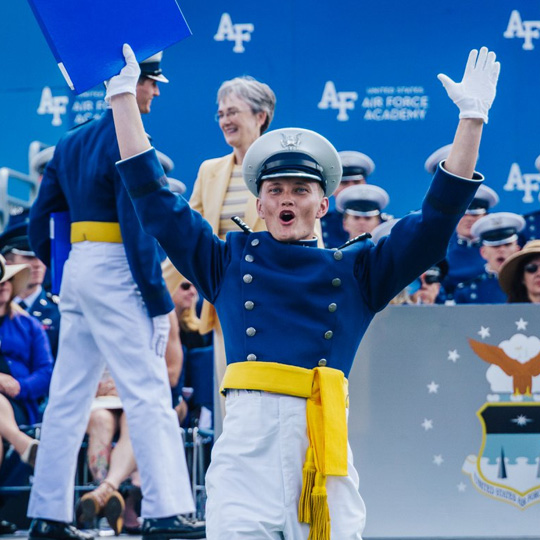 The United States Air Force Academy graduated its 60th class during the annual commencement ceremony on Wednesday, May 23, 2018.

A total of 984 cadets crossed the stage at Falcon Stadium, buffered by the cheers of family and friends in the stands. Graduation marked the end of four years of academic, military and athletic challenges that are designed to develop leaders of character for the Air Force and the nation.

The morning included an important milestone for the Academy. The 50,000th graduate in the history of the institution received his diploma – 2nd Lt. Farley Pipkins from Cadet Squadron 9.

Superintendent Lt. Gen. Jay Silveria kicked off the ceremony by talking about the Class of 2018’s exemplar, Capt. Louis Zamperini – an Army Air Corps airman and Olympic athlete. He spent 46 days adrift at sea after his B-24 crashed during World War II. He was eventually captured and held prisoner of war by the Japanese, but was an inspiration because of his courage and perseverance.

“Our cadets are proud to honor his legacy and courage,” Lt. Gen. Silveria said.

Gen. Goldfein took a few brief moments to talk to the graduating cadets, helping them recall their first formation in front of the Class Wall on June 27, 2014.

“For the very first time as a class, you stood side by side and shoulder to shoulder in your crisp new uniforms and took a solemn oath,” he said. “The same oath you took yesterday in your commissioning ceremonies and you will take again today.”

Today, he said, the classmates stand shoulder to shoulder one last time, awaiting the new Air Force adventure ahead.

He said the new graduates, like their legacy Class of 1968, enter military service during a time of war. He challenged each to strive to become leaders of character in the Air Force.

“As your chief, I could not be prouder to walk with each of you into our ranks,” he said. “Ladies and gentlemen, the Long Blue Line is strengthened today by this Class of 2018.”

Secretary Wilson thanked the parents in attendance for entrusting their children to the Air Force and nation. She urged the new graduates to take the opportunity in the days ahead to thank parents, friends, mentors and teachers for the time and dedication they invested in raising such high-quality young adults.

Secretary of Defense Gen. (Ret.) James Mattis was on hand to congratulate each of the newly minted second lieutenants. He also presented the annual commencement address.

Mattis recalled the legacy of Air Force heroes that inspire airmen of today. He challenged the new graduates to continue to defend our nation’s freedoms and ideals while serving in the military.

“We need you now and tomorrow at the top of your game,” he said. “We need you harder than petrified woodpecker lips. We need you mentally sharp, we need you physically tough, we need you spiritually strong. Aim high — clear into the outer reaches of space. Fly, fight and win.”

Mattis said the country’s military dominance hangs in the balance in today’s complex geopolitical landscape. He said he expects the new second lieutenants to be ready for the fight and ready to dominate.

“There’s no room for complacency as our adversaries do everything in their power to erode our military’s competitive edge,” he said. “And even less room for a sense of cynicism or victimhood. Your primary weapon system now is your attitude, coupled with the legacy of the Air Force that’s permitted you to join its ranks.”

The ceremony concluded with the traditional hat toss and Thunderbird flyover, followed by a half-hour Thunderbird performance.