Approximately a year after approval of the concept by members of the Association of Graduates, the AOG and the Air Force Academy Foundation are pleased to announce the first-ever dual-hatted chief executive officer overseeing both organizations.

The joint selection committee unanimously recommended Lt. Gen. (Ret.) Mike Gould ’76 to both boards for consideration. The AOG Board and the Foundation Board approved his selection.

Gen. Gould said he’s humbled by the opportunity to lead two critical supporting USAFA partners in the days ahead.

“I am looking forward to continuing to serve our alma mater during this critical time in USAFA’s history,” he said.

Transitioning to the civilian arena, Gould serves on several boards to include Goodwill Industries Colorado, Children’s Hospital Colorado, Friends of the McDermott Library, and the Falcon Foundation. He was a member of the inaugural College Football Playoff Selection Committee and most recently has been the CEO of the Air Force Academy Foundation. It was in this role that Gould and his team positively impacted Academy and graduate programs thanks to record fundraising successes.

“We were incredibly fortunate to have a strong slate of applicants for this important leadership role. Each candidate was a USAFA graduate who wished to selflessly serve the graduate community as CEO,” said Col. (Ret.) Cathy McClain ’82, AOG chair.

As the single CEO for the Foundation and AOG, Gen. Gould will be tasked with increasing the efficiency and effectiveness of the organizations as they continue to work closely together.

He also will guide both organizations as staff members work to achieve their separate yet complementary missions. The AOG’s mission is to provide lifelong support to our graduates; to celebrate and encourage graduates’ service to their communities and nation; to support the Academy and cadets; and to honor our heritage. The Foundation’s mission is to align donor passion and generosity to serve and support the Air Force Academy as well as the vital programs executed by five other supporting organizations.

Jack Kucera ’78, Foundation chair, and McClain said the AOG and Foundation Boards, as well as the organizations’ employees, are now poised to serve the Academy and its graduates in new and increasingly impactful ways.

“Mike has been a transformational leader in the Air Force and in the civilian world,” Kucera said. “The Foundation and AOG board members are excited to welcome Mike Gould as our new CEO. We expect great things as he guides the organizations in their independent missions to support the Academy, cadets and the graduate community.”

Even though the selection committee chose one of the incumbent leaders from among the field of five CEO finalists, McClain and Kucera assured the graduate community and Academy supporters it will not be business as usual at the AOG and Foundation.

“We are convinced that Gen. Gould is the leader our organizations need to foster innovation and impactful change in the days ahead,” Kucera said.

“This will be the first time in either of our histories that we’ve had a leader, in a position of authority, with a foot in both camps and able to make transformative decisions that balance the best interests of the Academy, our graduates, our cadets and the supporting foundations,” she said. 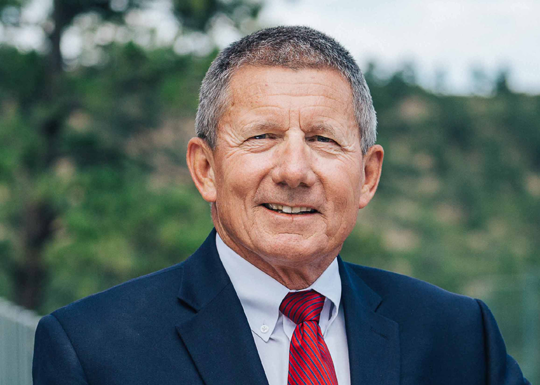