A large crowd was on hand Monday, Jan. 8, at Doolittle Hall for a luncheon and the Commandant's quarterly update. 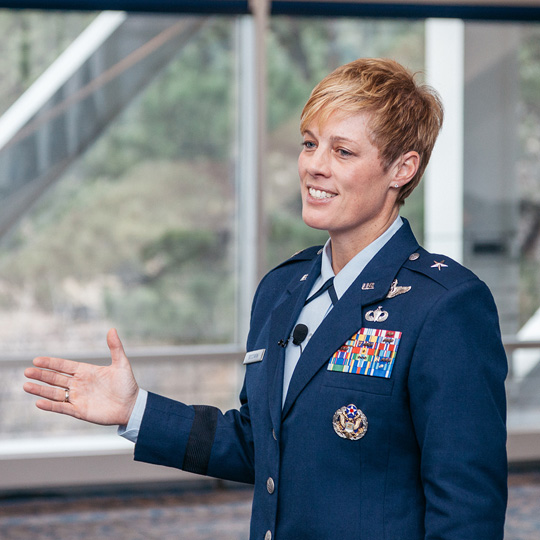 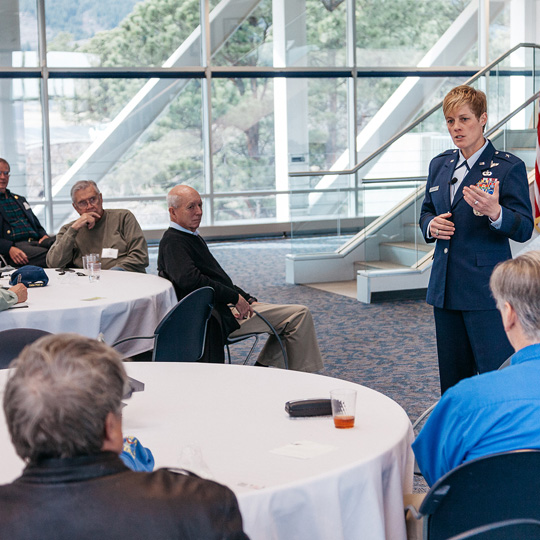 USAFA graduates, cadet parents and Academy supporters were among those on hand for the hour-long presentation and question-and-answer session.

USAFA Commandant of Cadets Brig. Gen. Kristin Goodwin '93 emphasized what she sees as the three priorities in her role — people, mission and pride.

Goodwin outlined her expectations that fall under those three priorities for the cadets and for the permanent party at USAFA.

First, she said, she encourages everyone to “not walk past a problem.”

Goodwin said by walking past problems, everyone creates a culture and environment that is unhealthy and doesn’t uncover long-lasting solutions.

To foster improvement in the culture and climate at USAFA, Goodwin noted, the Academy has instituted the Action In Motion Cadet Council. The council allows cadets to talk about tough issues and to communicate candidly.

“It’s not just dignity and respect, it’s professionalism,” she explained. “It’s tough issues … to figure out what life’s all about, and what’s important, and how to conduct yourself.”

“The reason is that you want to make sure you have an adult who helps guide the discussion … and make sure we’re going in the right direction,” she said.

A third new initiative is a guided discussion program at the cadet squadron level, using examples of real situations so that all can debate possible solutions and learn leadership qualities along the way.

Goodwin reports that the open discussion promoted of late has been fruitful, with upwards of 15 cadets stopping by her office to talk about issues and concerns.

From a mission standpoint (priority #2), Goodwin said the Academy is working to hold cadets and permanent party accountable in the days ahead. She noted a lack of accountability to the mission has been a concern in recent years.

To enhance accountability, the cadet leadership team suggested starting a “morning officer development” program. On Mondays and Fridays, squadron leaders get a chance to talk with their cadets and see how they are faring. On Tuesdays, Wednesdays and Thursdays, morning accountability gatherings focus on discussing important issues or concerns.

Under the third priority of pride, Goodwin said it‘s important for cadets to realize they are attending an academy and not just another university.

“You need to have pride in the journey that you got you to where you are and not to take it for granted,” she told the crowd. “Every single day you are here, you have an opportunity to make a difference. To have an impact on your classmates, to the classes above you and the class that’s below you.”

Pride in the Academy is not just about the cadets, Goodwin added, it’s also about the permanent party members.

“Every single day they can have a positive impact, or maybe not a positive impact,” she said. “To set the example, to motivate, to inspire, to train and give them the experiences so that they can go out there and some day replace us.”

Among other topics that Goodwin discussed were the four-class system of the Academy that has developed into more of a two-class system (upper classmen and fourth-class); a new competency-based Cadet Wing promotion system; and emerging written procedures and standards for USAFA.

Goodwin assured the crowd that the Academy is doing all it can to address various concerns. Responding to a question about the recent CBS television report about alleged sexual assaults on campus, Goodwin said USAFA continues to investigate complaints and take care of victims.

But, she added, sometimes media reports fail to tell the entire story, placing the Academy in a bad light when in fact the leadership is actively working to improve the situation.

Goodwin emphasized that so many positive things are happening throughout the Academy that she remains excited about the future of her alma mater.

“A lot of times we talk about the bottom 2 percent, but 98 percent of cadets are exceptional,” she said. “They are already making a difference.”

On an interesting note, Goodwin reported that she’s trying to reignite the “good traditions” of USAFA. Among them is the return of Mitch’s Mountain, which disappeared about four years ago. She said the massive dessert is created at Mitch’s twice a year and the cadets enjoy the experience.