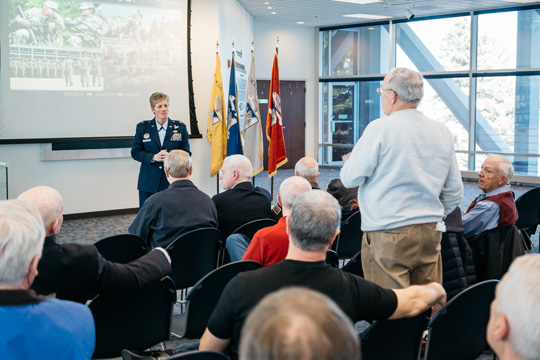 It’s the first update since a new commandant was announced. Col. Michele Edmonson will be promoted to brigadier general this summer and become the 29th commandant in the Academy’s history.

Goodwin, who took over as commandant in May 2017, will become director of current operations for the Air Force deputy chief of staff at the Pentagon.

Goodwin assured everyone in attendance that she remains committed to developing leaders of character and airmen warriors for the Air Force during the final months of her USAFA assignment.

“I’m committed until that guidon is taken away,” she said. “It’s been a fascinating journey from the very beginning until now, and I’m committed to the very end.”

During her opening remarks, Goodwin reported that she recently conducted an “all call” for the Cadet Wing. Her message to cadets was the importance of leaving a legacy.

“The clock never stops on your legacy,” she noted, “so waste no time on making an impact. It’s up to them individually to decide what difference they want to make for themselves and their own growth … and for their teammates and their squadron and their class while they are here at the Academy.”

Cadets are having an impact on the institution, the Air Force and the nation, she said. She pointed to the recent FalconSAT satellite launch, an ongoing drone project, cyber competition success and a successful roadside rescue by a group of cadets as a few examples of the accomplishments of the Cadet Wing.

Goodwin reported that Superintendent Lt. Gen. Jay Silveria ’85 advocated for more pilot slots for the Class of 2019. As a result, 537 firsties are slated to go to pilot training after graduation.

“We’re really excited about that,” Goodwin admitted. “We had the largest amount of cadets being selected for pilot training.”

Goodwin told the audience that she continues to work to codify the Academy’s 47-month plan that each cadet must follow “from the footprints to graduation.” Her team also is working on writing down Academy processes and cadet standards that will be available to new leaders and staff as they arrive here.

In addition, Goodwin said her team has instituted “Warrior Weekends” and “Warrior Wednesdays” that have been very successful. There will be two more “Warrior Weekends” before the end of the academic year. The weekends include special speakers who can relay their personal experiences as airmen warriors.

“Warrior Wednesdays” include an email to cadets, with links to inspirational and educational stories.

In closing, Goodwin noted that she will conduct one more “Commandant’s Quarterly Update” before she leaves for her next assignment.

She also extended an invitation to the graduate community to participate in the “Evening with the Commandant” events that will be upcoming. Look for further details from the AOG.