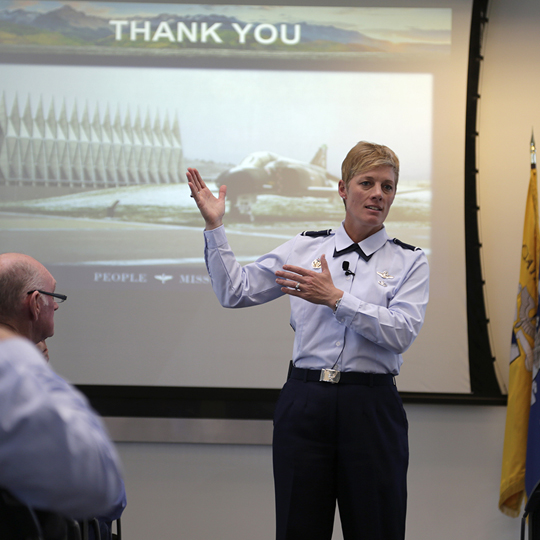 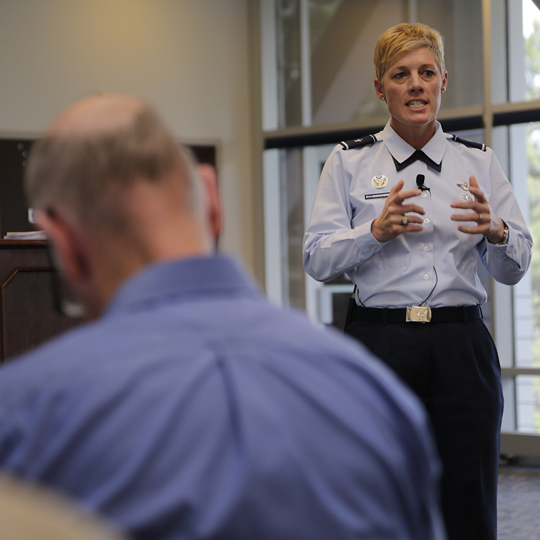 “I want to make sure that we work together for our Academy,” she said.

To kick off the 90-minute session, Goodwin talked about her recent five-week CAPSTONE General and Flag Officer Course experience.

“It was an exceptional opportunity,” she reported. “It’s always important that we have professional development. It doesn’t matter if you’re a cadet, a second lieutenant, a captain or a general.”

Goodwin said the course allowed her to develop a network of professionals from around the joint services.

The general officers traveled throughout the U.S. and then the world to gain a perspective on what’s happening globally. She noted that much of the information she learned was eye-opening.

Other topics Goodwin focused on included:

Basic Cadet Training: Goodwin reported that the Academy enjoyed a record summer in terms of low attrition, with just seven cadet candidates choosing to leave and 12 having to leave for medical reasons.

“I couldn’t be more proud of basic training,” she said. “They (Class of 2022) are a fantastic class. They were determined, they worked hard, they worked together.”

Goodwin also shared a couple videos from BCT showing herself going through the Assault Course and Obstacle Course at Jacks Valley.

“They had fun with me,” Goodwin laughed.

Air Force Specialty Code (AFSC) changes: Goodwin reported that five Air Force job categories are no longer available for cadets to pursue. “That was kind of a shock to the system,” Goodwin noted.

Those 55 slots have been rolled into the rated force, she said. For the Class of 2019, there will be 533 pilot slots available, compared with 450 slots last year.

Cadet solutions: The Academy has instituted a “solutions box” for cadets to offer ideas for change. Then cadets are part of the solution that helps to reduce the cynicism that creeps into the Cadet Wing. Goodwin reported that the feedback system has gone very well so far.

Some of the changes that have resulted include iced coffee offered at Jacks Valley, coin-free laundry in the dorms, and accountability that now allows cadets to run safely into the stands at the start of football games.

As an update, Goodwin added that cadets will begin wearing OCPs (occupational camouflage pattern) uniforms sometime after graduation in May.

47-Month Calendar: Goodwin updated the crowd about a cadet’s journey from the footprints on Inprocessing Day to graduation four years later.

“We put this book together to make sure that every cadet has a shared experience,” she explained. “From beginning until the very end, you are taught the most appropriate thing at the right time. It’s not just haphazard.”

Warrior Weekends: Goodwin has instituted four “Warrior Weekends” throughout the year. The event includes guest speakers from the operational Air Force, in an effort to bring back the warrior spirit to USAFA.

“We are learning and teaching the same things that we’re doing on active duty, tying the operations right here to the Academy,” she said.

In closing, Goodwin says she remains optimistic about the current direction of the Academy.

“We’re super excited with where the morale is and where the focus is,” she said.

During a question-and-answer session, Goodwin fielded questions about Recognition being held in March rather than May; why cadets wear ABUs to football games rather than dress uniforms; and what the future holds for the commandant after her assignment is finished at the Academy.

Goodwin reported that she isn’t aware what her next Air Force role might be, but expects to be here at least through graduation.