In an effort to stay connected to the graduate community, USAFA Commandant of Cadets Brig. Gen. Kristin Goodwin ’93 held the second of her quarterly open forums Monday afternoon (Oct. 2, 2017) in Polaris Hall. 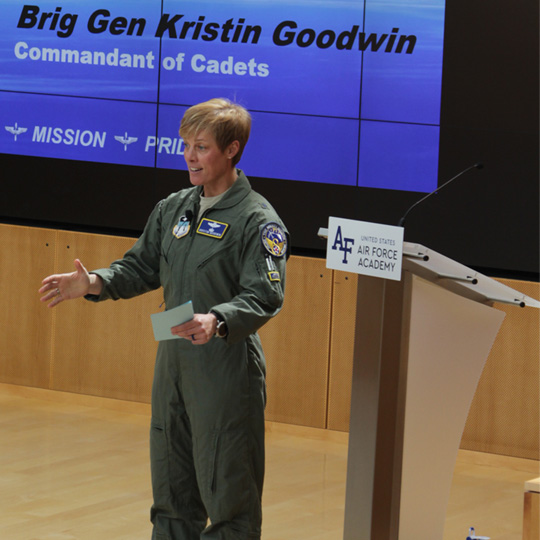 To open her hour-long session, Goodwin talked about some of the successes the Cadet Wing has experienced in recent weeks.

She noted that Max Wiseman, a young leukemia survivor, was recently named “Cadet for the Day” and was given the royal treatment at the Academy. He is the son of 2002 USAFA graduate Letitia (Dawson) Wiseman.

Goodwin talked briefly about “In The Stairwell” and its recent successful run on the America’s Got Talent television program. She said the a cappella group’s appearances provided a great opportunity for the cadets and the Academy.

“Through this experience, we were able to show America a little bit more about the cadet experience, what the Academy is all about and what our Air Force is all about,” she told the crowd. “It was just a win-win all the way around.”

The big challenge now, she added, is that the Academy is receiving requests from around the globe for the singing group to perform.

“And how do we balance that?” she asked.

Goodwin reported that several cadets have formed a new CADD chapter (Cadets Against Drunk Driving) and the group is encouraging fellow classmates to avoid drinking and driving. The group provides rides when a fellow cadet finds themselves in a bad situation.

In addition, Goodwin said several cadets have launched a new app called Good4DI, which allows cadets to sign in and out for passes. “They use this technology every single day now, and it’s been hugely effective,” she said.

Goodwin also mentioned her efforts to empower cadets and Academy staff to make various decisions. The commandant said she is stressing accountability, professionalism, respect and dignity at every level.

During the question-and-answer session, an alum asked about the lockdown that occurred Friday night. Reports of an active shooter led security forces to shut down the campus and investigate the report, which turned out to be a false alarm.

Goodwin and Superintendent Lt. Gen. Jay Silveria ’85 happened to be meeting with about 300 cadets in Arnold Hall when the lockdown occurred. The senior leaders set up a virtual command post in an attempt to gather information and develop a plan of action.

As the evening progressed, however, a “barrage of misinformation” resulted in some panic within the Cadet Wing.

Suddenly, false reports started circulating via social media that a shooter was in Vandenberg Hall in Squadron 3. Another report suggested that two people had committed suicide. Yet another false report indicated that people running around the Cadet Wing with assault rifles. A local news report incorrectly stated that a suspect had been arrested.

“All of this is false. None of this happened,” she said. But cadets who were locked in their rooms had no way of knowing “what’s real or not real,” she added.

“They’re scared. They think they’re going to die,” she told those in attendance. “One cadet jumped out of a second-story window to run away and went to Stillman Field.”

Goodwin praised security forces for how they handled the situation, and she suggested that the Academy’s established emergency response plan worked well.

“What I’m proud of is … if it would happen again, we’d do the same thing,” she reported.

Other topics that were discussed: