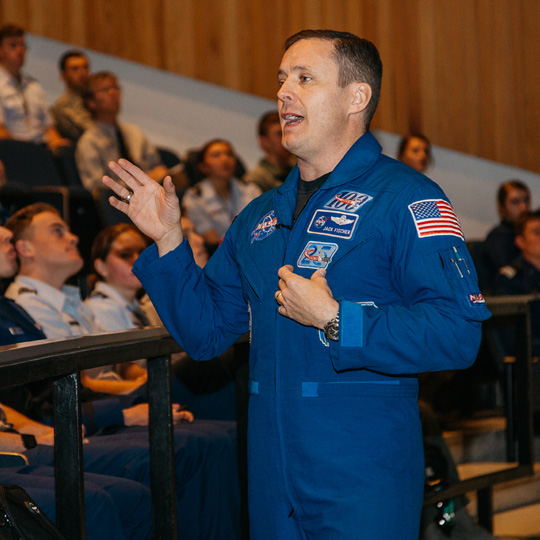 Fischer, who was an astronautical engineering major at the Academy, was selected to be an astronaut in 2009. He served as a flight engineer for Expedition 51/52 — heading to space on April 20 and returning Sept. 3, 2017.

During a noon presentation in Fairchild Hall’s D-2 lecture hall, Fischer recounted his experiences in space, including two space walks.

“Obviously, the view was beyond amazing when you’re out there,” Fischer said of his space walks. “When you look out to the stars, it makes you feel so small. It really does change your perspective.”

Fischer spoke about the various experiments he was involved in while on the Space Station, including efforts to create stronger alloys and efforts to test a new cancer drug.

He also mentioned some of the fun experiences he enjoyed, such as renewing his wedding vows with his wife of 25 years while he was in space.

Fischer praised the entire international team that made his mission possible.

“The International Space Station is a fantastic example of what we can do when we work together,” he said. “Just like here at the Academy, the team is what gets the job done.”

“The future of the Air Force … space is a big part of that,” he said. “It is going to be a huge growth industry. It infiltrates pretty much everything we do now.”

If cadets are interested in becoming the next generation of astronauts, Fischer suggested that the future leaders take advantage of the many opportunities available to them at USAFA and during their Air Force careers. He did add, however, that the last three Academy graduates who became astronauts all were astro majors, all went to Massachusetts Institute of Technology for graduate school and all graduated from test pilot school.

There is no magic formula to ensure a person becomes an astronaut, he added. He suggested that cadets just work hard and excel in everything they do to give them the best chance of reaching their career goals.

Col. Fischer has a Master of Science in aeronautics and astronautics from the MIT. He is a command pilot with more than 3,000 flight hours — flying more than 45 types of aircraft.