FalconSAT-8 Ready to Catch a Ride

When the X-37B Orbital Test Vehicle launches to space this weekend, the hard work of Academy cadets and their instructors will finally head to space.

USAFA’s FalconSAT-8 satellite is among the experimental payloads hitching a ride on a United Launch Alliance rocket.

UPDATE: Launch time was scheduled for 8:24 a.m. Eastern Time on Saturday from Cape Canaveral Air Force Station in Florida, but threatening weather delayed the launch to Sunday. Watch a replay of the launch.

Either day, USAFA cadets and faculty members will be anxiously watching at a launch party on campus. Others will be standing by inside the Academy’s ground station, where cadets operate actual satellites that are orbiting the Earth.

“We’ll be ready for whenever our mission partner decides it’s time to release us,” says Col. Luke Sauter ’02, permanent professor and head of the Department of Astronautics. “Then we will initiate our operations from there.”

A few recent USAFA graduates who previously worked on FalconSAT-8 will be lucky enough to attend the launch at Cape Canaveral.

“We had a plan to get as many of our cadets out there as we possibly could,” Sauter says. “Unfortunately, given the situation, we’re only going to get a couple in person.”

Launch time is always a mix of excitement and nerves, Sauter reports. But he’s cautiously optimistic that everything will come off without a hitch.

“With launches, so many things can go wrong,” he says. “While we try to knock down the risks, there’s always risk. Once we get an understanding that the satellite has survived the environment and it’s functioning, we’ll breathe a little bit easier.”

Sauter knows the potential perils of launch day. When he was a cadet working on FalconSAT-2 in 2002, the rocket that was supposed to send the satellite to orbit exploded.

Once the satellite is operational, FalconSAT-8 will conduct five different tests and demonstrations — the latest generation of plasma thruster, a metamaterials antenna, a carbon nanotubes experiment, an energy surge and control device, and a joint payload with the Air Force Institute of Technology for a low-cost camera. All the activities will be conducted by cadets and faculty inside ground control.

2nd Lt. Hunter Ahlquist ’19 admits he’s excited about the weekend’s launch plans. As a cadet, he helped prepare FalconSAT-6 to launch in 2018. Then he worked on FalconSAT-8 in its early stages of development.

An astronautical engineering major, Ahlquist was part of the senior capstone program that requires cadets to be involved in FalconSAT. He says it was a great experience.

“In the classroom, you worked on equations and formulas to solve problems that were very clear cut,” he says. “But working with the FalconSAT program, it was a lot less cut and dried. The problems were more abstract. It gave me a lot of real-world skills on problem solving and critical thinking.”

Ahlquist’s efforts on FalconSAT-8 included vibration testing and vacuum chamber testing — making sure the satellite could handle the bumpy ride to space and the eventual harsh environment of space.

“We made sure that all the sub-systems worked,” he explains. “On the ground, we can fix them. Once the satellite is on orbit, we obviously cannot fix anything.”

Now a graduate student at Purdue University, Ahlquist says he will be watching the weekend launch with great interest.

The satellite program has been offered to cadets since the 1980s, at first working with the Space Shuttle. In 1997, the first FalconGOLD was launched.

“Our motto in the department is learning space by doing space,” he says. “Our cadets get to see the full cradle-to-grave understanding of what it takes to build a satellite, to fly a satellite and to operate a satellite. We offer an experience that really no other college can provide.”

Between 30 and 40 cadets typically are involved in FalconSAT each year, Sauter estimates.

This next academic year, Sauter says cadets and faculty will continue to operate FalconSAT-6 and FalconSAT-8. And they will continue the development of FalconSAT-X, which will be the next generation of satellite that will eventually launch to space in the future.

In addition to government funding, the FalconSAT program is supported with private contributions from the Boeing Company, the Wynne Space Professional Center for Excellence Fund — created by former Secretary of the Air Force Michael Wynne, Col. (Ret.) Nancy Insprucker ’81 and others through the Air Force Academy Foundation. 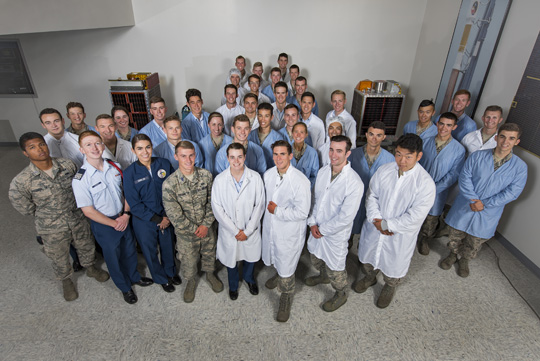 Cadets and instructors in the FalconSAT program pose for a group photo at the Academy, along with the FalconSAT-6 and FalconSAT-8 satellites pictured in the background, prior to the 2018 launch of FalconSAT-6. (U.S. Air Force Academy photo)