‘I can’t wait to get started’ 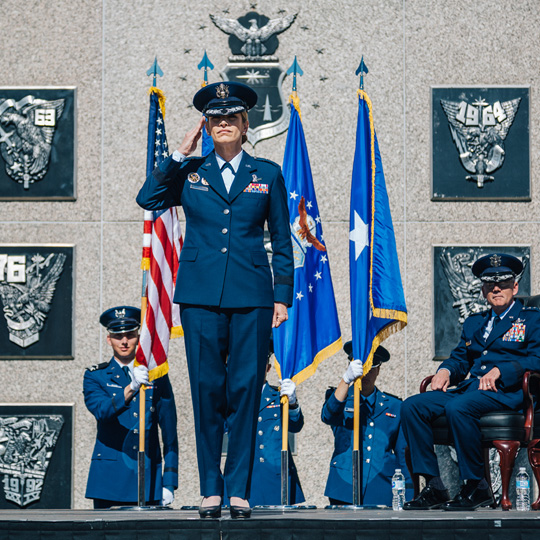 The newest member of the senior leadership team at the United States Air Force Academy assumed command at a ceremony Friday morning, May 31.

Brig. Gen. Michele Edmondson took over as the institution’s 29th commandant of cadets, a role in which she will oversee the character and leadership development, military training and cadet life activities for the 4,000-plus member Cadet Wing. She also is responsible for leading 200 Air Force and civilian personnel.

“It goes without saying that leading the Cadet Wing is no small task,” Lt. Gen. Silveria told the crowd. “I’m confident you will perform in this role as you have in each of your previous positions — with integrity, selfless service and excellence. My challenge to you is to elevate the performance of the Cadet Wing to even greater heights … to ensure that they are not only up to the task, but ready to outpace, outthink and outperform our adversaries in whatever mission they are called on.”

After accepting the Cadet Wing guidon and assuming command, Brig. Gen. Edmondson offered a few words to family, friends, USAFA team members and cadets in formation on the Terrazzo.

“Dave and I are extremely excited to be here and join your team,” Brig. Gen. Edmondson said. “I can’t wait to get started, developing our nation’s sons and daughters into courageous and inspirational leaders of character, ready to fight and win our nation’s wars.”

Brig. Gen. Edmondson said she’s looks forward to working with all of the mission partners and community leaders to help move USAFA forward.

Turning her attention to the cadets, Brig. Gen. Edmondson commended the Cadet Wing for being part of the 1% of American citizens who volunteer for military service.

“Each and every one of you are incredibly talented, and frankly you could have chosen any path for a college education,” she said. “Yet you came here to answer your nation’s call. A calling much greater than yourself, and to do what so few are willing to do.”

Brig. Gen. Edmondson pledged to strongly support the cadets in their journey through the Academy.

“Make no mistake, our people are our most precious and valuable resource,” she said. “I am committed to your success. Together, we will set high expectations and standards, and we hold each other accountable.”

To conclude the ceremony, Brig. Gen. Edmondson received her first salute from the Cadet Wing.

Secretary of the Air Force Heather Wilson ’82, on her last day in that Air Force leadership role, was among the first to congratulate the new commandant.