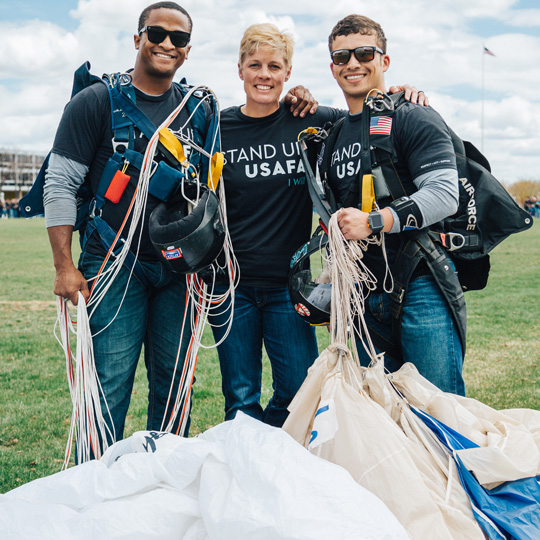 The Terrazzo took on a decidedly different appearance on Wednesday, April 24, as much of the Cadet Wing took part in Denim Day.

Cadets, permanent party and friends of the Air Force Academy were decked out in jeans and black t-shirts — the unconventional uniform of the day. Everyone gathered up before lunch for an event on the Terrazzo to mark the occasion.

The t-shirts many wore carried a message — “Stand Up USAFA … I Will.” On the back of some shirts were the words “Building Trust.”

Brig. Gen. Andrew Armacost, dean of faulty at USAFA, welcomed the crowd and pledged continued support from the permanent party to address sexual assaults and help victims of those assaults.

“Right here and now on the Terrazzo, we are reconfirming our resolve to stand as one team at USAFA in this fight,” he said. “All of our mission elements are here today in order to support you, the Cadet Wing, and to express both our gratitude to and solidarity with the SAPR [Sexual Assault Prevention and Response] programs and people that educate our airmen and care for our survivors.”

To put an exclamation point on the event, the Wings of Blue and several high-profile jumpers parachuted to the Terrazzo. Superintendent Lt. Gen. Jay Silveria ’85 and Prep School Commander Col. Timothy Thurston ’95 participated in tandem jumps, while Brig Gen. Kristin Goodwin ’93 solo jumped to the Terrazzo.

In addition to the 11:30 a.m. parachute demonstration, cadets participated in a variety of educational opportunities throughout the day — including discussions about healthy relationships, consent, respect and Sexual Assault Awareness Month.