USAFA airfield gets a new name

Nearly a decade in the making, the Air Force Academy has renamed its airfield in honor of Gen. Benjamin O. Davis, Jr., (USMA ’36) the groundbreaking Tuskegee Airman and World War II pilot. 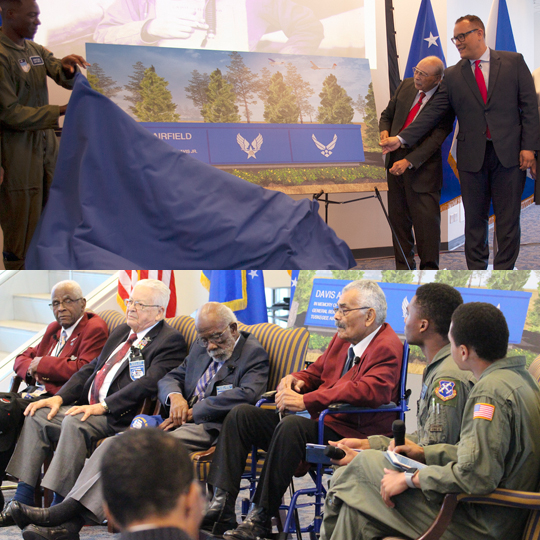 The airfield’s renaming was the brainchild of then-cadet Capt. Fred “Juice” Johnson ’12, who suggested the name change in honor of the history-making airman.

“We owe you an apology, Juice, that it took us 10 years to catch up to your vision,” joked Lt. Gen. Jay Silveria ’85, Air Force Academy superintendent. “Thank you for beginning this journey for us.”

Silveria noted that it’s unusual when an Academy facility isn’t named after someone.

“Everything around here, as we drive by, has a name,” he said. “We have Sijan and Vandenberg and Fairchild and Harmon. Then you drive down Stadium Boulevard and you see an amazing blue sign that says ‘airfield.’ I truly think we can do better … and today we’re going to mark the occasion.”

Silveria told the crowd that Gen. Davis was an inspirational leader who is well deserving of the honor. In addition to a 35-year military career, Gen. Davis served as the chairman of the USAFA Board of Visitors during a pivotal time in the institution’s history.

Gen. Goldfein called Gen. Davis a pioneer who taught airmen “the power of perseverance and courage and character and extraordinary competence.”

“We’re naming this airfield after a true hero,” Goldfein said, “a man of impeccable character and extraordinary competence. This airfield, and the story of Gen. Davis, will inspire future leaders to turn their dreams into flight. He took on the barriers of race and discrimination for our military, and he opened doors of opportunity for many of our nation’s and Air Force’s greatest leaders.”

Guest speaker Gen. Charles Q. Brown, Jr., admitted he was one of those who was inspired by Gen. Davis and his groundbreaking military career. Gen. Brown is now serving as the first African American commander of the Pacific Air Forces.

Brown noted that Gen. Davis, as a black cadet at West Point, spent four years never eating with, conversing with or rooming with a fellow cadet because of his race.

“Suffice to say, those four years were the first test of Benjamin Davis’ determination and self-discipline,” Brown said. “They were also evidence of the dedication he had to realize his dream.”

Davis graduated in the top 15% of his class, and then eventually went on to command the 332nd Fighter Group, known as the Red Tails. The group found great success during World War II and helped lead the military toward full integration.

“I would not be standing here today,” Brown admitted, “if not for Benjamin O. Davis Jr. and these men [Tuskegee Airmen] sitting in the front row.”

Davis’ nephew Judge L. Scott Melville and great-nephew Doug Melville spoke briefly about their relative and the impact Gen. Davis had on the nation.

Doug Melville recalled the close relationship he had with his great-uncle, who wrote out a blank check as a high school graduation gift and told Doug he could attend any college he wanted.

“Uncle Ben is what I used to call him,” Melville said. “He was my North Star in life, as he is today in legacy. He was the nicest, sweetest man.”

Judge Melville, who was raised by Gen. Davis and his wife, Agatha, helped unveil an artist rendition of the sign that will be installed at the entrance to the Gen. Benjamin O. Davis Jr. Airfield.

Davis entered the U.S. Military Academy at West Point in 1932, and in his junior year, applied for the Army Air Corps, but was rejected because it did not accept African Americans. He graduated in 1936 and served as an infantry officer in an all-black regiment.

At the beginning of World War II, Davis was assigned to the first training class at Tuskegee Army Air Field, Alabama. Graduates of this program became known as the Tuskegee Airmen.

Davis earned his pilot wings in 1942. During the war, he commanded the first all-black air unit, the 99th Pursuit Squadron. Deployed to Tunisia, North Africa, and flying P-40 fighters, the squadron saw combat for the first time in a dive-bombing mission against a German-held position as part of Operation Corkscrew. He later commanded the 332nd Fighter Group that deployed to Europe, where it racked up outstanding combat record against the German Luftwaffe.

Davis continued his Air Force career at the Pentagon and overseas. He retired as a lieutenant general in 1970.

In 1998, he was advanced to the grade of general. President Bill Clinton pinned on his four-star insignia at White House ceremony including the Davis family and original members of the Tuskegee Airmen.