‘We’re on the same team’

The 28th Commandant of Cadets at the United States Air Force Academy — Brig. Gen. Kristin Goodwin ’93 — met with the Rampart Chapter of the Association of Graduates on Monday, July 10, to better establish the lines of communication between USAFA leaders and the institution’s alumni. 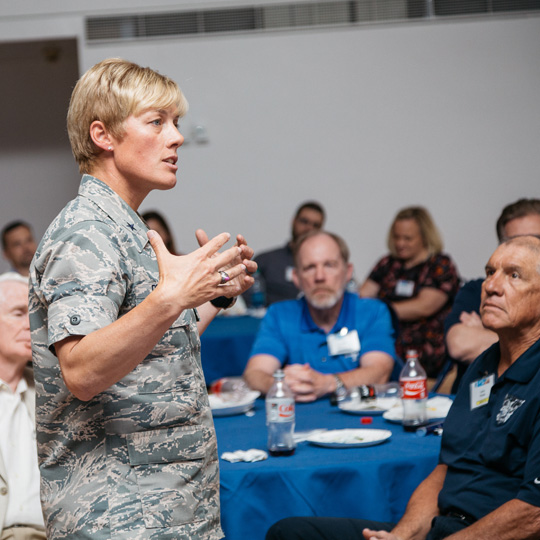 Brig. Gen. Kristin Goodwin ’93 interacts with members of the audience during an open forum Monday at Arnold Hall. Photo by Ryan Hall/Association of Graduates.

In an hour-long presentation at Arnold Hall, Goodwin talked about her background and the Air Force experiences that have helped shape her leadership style.

As a result, joining the service was a natural choice for Goodwin, she said.

Despite her father’s attempts to convince her to join the Coast Guard instead, Goodwin was drawn toward the Air Force mission.

“If I had to do it all over again, I would,” she told the crowd. “I’m proud of where I came from. I’m proud of this institution. And I’m very honored and proud to be back — to give back to the institution that gave me the foundation of who I am, not only as a person, but also as a leader.”

She would go on to fly a host of aircraft — B-52s, B-2s, EC-130s, C-130s, G-38s, T-1s and T-37s. Goodwin would later commanded the 509th Operations Support Squadron in the Second Bomb Wing, leading the B-52 back into combat for the first time in a decade. Goodwin would be part of the planning team for the “Shock and Awe” campaign in Iraq.

Later assignments would take her to the Pentagon; Washington, D.C., think tanks; and the U.S. Embassy in Bangkok.

Goodwin says she eventually shifted away from her goal of becoming an astronaut when she realized the importance of educating the next generation of airmen. Her current role will allow her to have a significant impact on the Air Force’s future, Goodwin adds.

“I decided that I was going to stay, and make sure that every single day I try to make a difference and make this Air Force better in any way that I could,” she said. “It has been a great journey ever since.”

For the Academy graduates in attendance, Goodwin outlined her top three priorities in her role as commandant — people, mission and pride. Often Air Force leaders suggest that the mission is the top priority, but she disagrees.

Without great people, the Air Force’s mission can be compromised, she suggested.

Goodwin opened the floor to questions from the audience. The queries ranged from the shortage of pilots in the Air Force to fraternization rules to minority recruitment.

When asked about a perceived reduction in military training and discipline in the Cadet Wing, Goodwin lamented the disappearance of a document that once outlined the basic military knowledge that every graduate was expected to learn throughout their Academy experience.

“That book doesn’t exist any more, but by October it will,” she pledged.

Goodwin said she plans to sit down with the dean of the faculty and the athletic director to identify the “foundational basics” that every cadet needs master and put it down in writing.

Goodwin also promised the alumni that she intends to communicate more regularly with the graduate community, cadets and others. She hopes to meet quarterly with graduates to update them on the current direction of the Academy and to gather feedback from fellow alums.

“I think it’s important that we get together often … and make sure we collectively work together for the best outcomes for this institution that we all care about,” she said.

In conclusion, Goodwin asked all alumni to adhere to the core values of the Academy as they conduct themselves in the community and on social media.

She noted that “integrity” requires that each graduate tell the truth in every situation. In her six weeks on the job, Goodwin noted that she and her family have been the target of hurtful comments and untruths.

“Let’s make sure we’re working together,” she urged the audience. “Let’s make each other better.”

Brig. Gen. Kristin Goodwin ’93 interacts with members of the audience during an open forum Monday at Arnold Hall. Photo by Ryan Hall/Association of Graduates.