Association of Graduates chapter presidents from throughout the nation have gathered at the United States Air Force Academy this week to exchange ideas, learn about new initiatives and grow their personal networks. 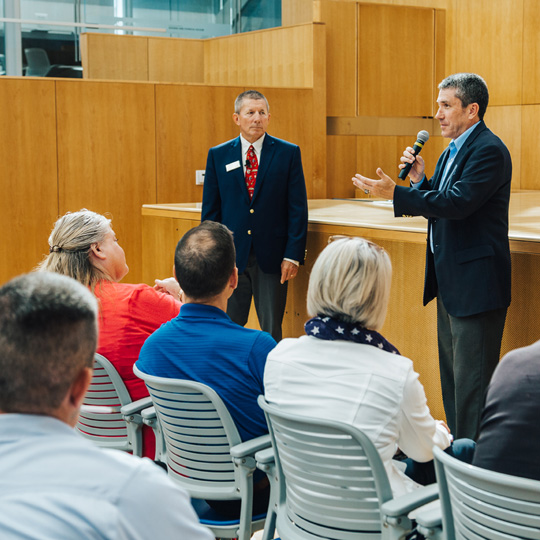 The conference kicked off Wednesday with breakfast and a show at the newly renovated Planetarium and STEM Center.

The chapter officials then moved to Polaris Hall, where the group was greeted by AOG Board Chair Cathy McClain ’82 via video technology. She talked briefly about the AOG board’s recent strategic planning efforts, and about recent conversations regarding how the organization can better serve all USAFA graduates in the future.

AOG President and CEO Marty Marcolongo provided an update about the alumni association’s ongoing efforts to further engage Academy graduates and to encourage chapter service projects throughout the country.

USAFA Endowment President and CEO Lt. Gen. (Ret.) Mike Gould ’76 talked about the efforts of his organization to grow the percentage of graduates who donate back to the institution. Currently, approximately 12% of Academy graduates contribute financially at some level. That participation figure is considerably lower than many institutions — Princeton 55% and Army 35%, just to name a few.

The message, Gould said, is “help us to help our Academy.”

During a question-and-answer session, Marcolongo and Gould fielded a number of questions from chapter presidents. One recurring theme was bridging the gap between the older generations and more recent graduates.

Corrie Grubbs, the AOG’s senior vice president of operations, talked about a new career center website that will provide a one-stop-shop for graduates looking to transition now or in the future.

In several break-out sessions, chapter leaders talked about such topics as using technology to tell their story and promote upcoming events; exchanging fresh ideas for stage-of-life events and inclusive service projects; and collaborating with Parents Clubs within a geographic region.

Among the ideas for events discussed to engage graduates were game nights, a day at the zoo, “Noon Meal Formation” events with a special speaker, biking/running groups, and community service projects.

On Thursday, the chapter presidents gathered along with dozens of Parents’ Club leaders for combined conference sessions.

Among the topics of discussion were an Academy update from leadership, ideas on better connecting across generations, and suggestions on how everyone can help tell the story of the Academy in their individual communities.

In his briefing with the combined conference, USAFA Superintendent Lt. Gen. Jay Silveria ’85 reported that 62% of the cadets in the newest class, the Class of 2023, have parents who never served in the military.

As a result, many of those parents are experiencing the military for the first time and then talking about their perceptions when they return home, Silveria noted.

He encouraged parents to educate themselves so they can better share the impressive things that are happening within the Cadet Wing and at the institution.

Among other updates shared from the senior leadership team: