The two organizations — which oversee graduate clubs and cadet parent chapters throughout the nation — met together at Doolittle Hall on Thursday. The Chapter Presidents’ Conference was held over three days — Wednesday through Friday.

The joint and individual conferences gave the clubs and chapters the chance to share best practices and ideas, plus get to know Academy leadership and nonprofit leaders better. And there was plenty of time for questions and answers to clarify controversial topics and to explain upcoming changes and projects.

Lt. Gen. Silveria welcomed the crowd and mentioned that he’d been in his current role for just over a year.

Among the topics that Lt. Gen. Silveria focused on during his presentation was the changing face of the Academy, including the demographics of the Cadet Wing.

He noted that 26 percent of current cadets are women, up from 8-10 percent in the early 1980s. He also reported that 33.5 percent of the newest class is made up of minorities — the highest minority percentage ever.

When he was a cadet, the superintendent said the Cadet Wing was much more homogeneous. He said a diverse Cadet Wing makes for a stronger Academy overall.

In addition, Lt. Gen. Silveria noted that parents of cadets today are much more involved with the Academy than previous generations. He reported that approximately 2,400 people showed up with the 1,182 cadets on Inprocessing Day in June, and upwards of 10,000 parents, family members and friends will be part of Parents’ Weekend this year.

“The level of parental involvement that you represent is really, really a huge difference that I’ve seen since the 1980s,” he told the parents’ club presidents.

The challenge, Lt. Gen. Silveria added, is that 62 percent of the incoming cadets have parents with no military background. That means that it’s up to the Academy, parents’ clubs and Association of Graduates chapters to help those parents and families learn and tell the positive story of the Air Force Academy to others.

“They are really, truly ambassadors,” he suggested.

Lt. Gen. Silveria was happy to report that, of the 1,182 cadets who started Basic Cadet Training in June, only 15 have left the Academy, which is the “lowest attrition rate for basic training we’ve ever had.”

He credited that fact to a changing atmosphere at USAFA, which focuses more on encouragement and mentoring to increase a cadet’s chances of graduating from the institution. He added that USAFA does a better job of screening applicants so that those who arrive are ready for the challenges ahead.

In addition, Lt. Gen. Silveria talked about innovation at the Academy, and the need to adjust to meet the future workforce needs of the Air Force.

“What got us here will not get us there,” he said of the 21st century fight. “We have to change. We can’t exist on the idea that we have it right.”

Lt. Gen. Silveria updated the crowd about several projects that are underway or about to be underway.

Security cameras are being installed on campus to ensure that cadets and USAFA personnel are safe. Laundry facilities are now free to cadets and are maintained by the 10th Air Base Wing — no more need for mounds of quarters.

He noted that uniform changes are just around the corner — perhaps as early as next summer; a new visitors center will be constructed outside the North Gate; a new Center for Cyber Innovation will break ground next year; the Cadet Chapel renovation will take place over the next four years; the Air Gardens will be restored to its previous glory over the next few years; Sijan Hall is in the midst of a five-year upgrade; the Falcon Stadium locker rooms are upgraded and ready for use.

“All of this institution was built in about a four-year period — in the late 1950s and early 1960s,” he explained. “So all of it is aging out at the same time. We’re working through that.”

Lt. Gen. Silveria spent a fair amount of time talking about the shortage of pilots in the Air Force and what the Academy is doing to help solve that problem.

“Our pilot numbers in the last three years have gone up steadily,” he said. That upward trend will continue for many years ahead, he added, with more than 50 percent of all future graduates going to pilot training (including both conventional aircraft and remotely-piloted aircraft).

Questions from parents and chapter presidents included an assessment of the quality of faculty now teaching at the Academy; how chapters and clubs can support Cadet Clubs that are traveling throughout the U.S.; and the future search for a new athletic director.

Brig. Gen. Goodwin spoke about the “warrior ethos” that is being emphasized by the commandant and her staff.

“Being a warrior not just a funny thing we say, it’s a real thing,” she said. “It something that needs to be a part of our ethos, our core and who we are.”

Among accomplishments she pointed to over the past year, Brig. Gen. Goodwin said her team has codified a 47-month development plan that outlines everything that a cadet will experienced over his or her four years.

She also reported that Basic Cadet Training was a huge success this year.

“That’s because of the leadership, the dedication, the personal interaction that we had with those appointees and basics,” Brig. Gen. Goodwin said. “I can’t be more excited about that.”

In a separate session with the AOG chapter presidents, Lt. Gen. (Ret.) Mike Gould ’76 talked about his role as president and chief executive officer of the USAFA Endowment.

He noted that the Endowment and the AOG are now working more closely together to benefit the Academy, current cadets and graduates, and he thanked AOG President and CEO Marty Marcolongo ’88 for the strengthening partnership.

“We are both well aware of what happened when the Endowment split away from the AOG,” he said. “And I think we all realize that we ought to be merging, not going in opposite directions.”

Gould said the Endowment is “raising more money right now … than we have in our history.” And there are plans to raise even more support in the years ahead. 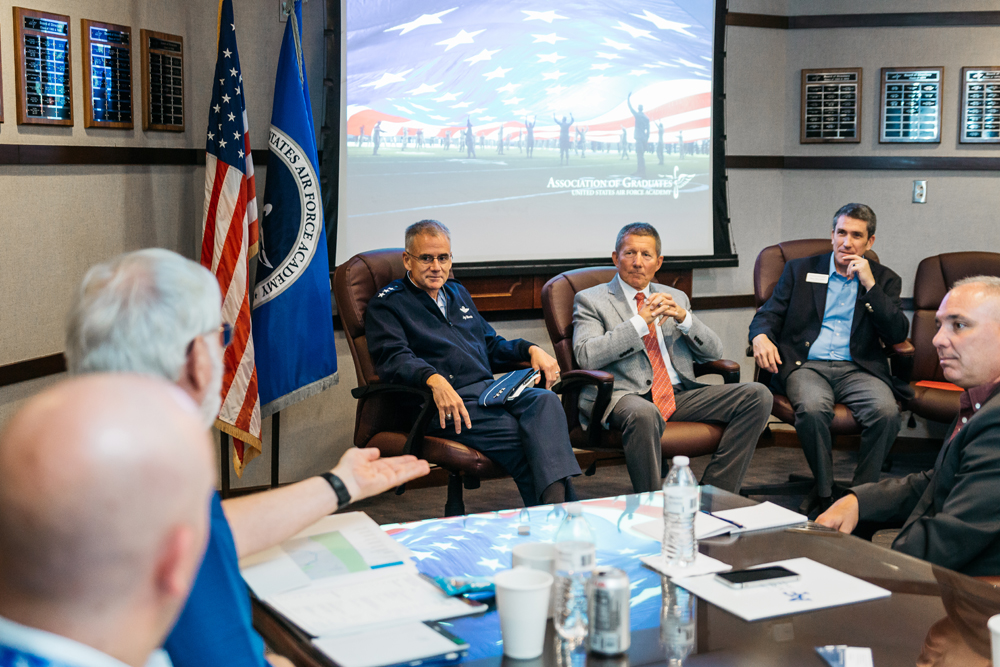 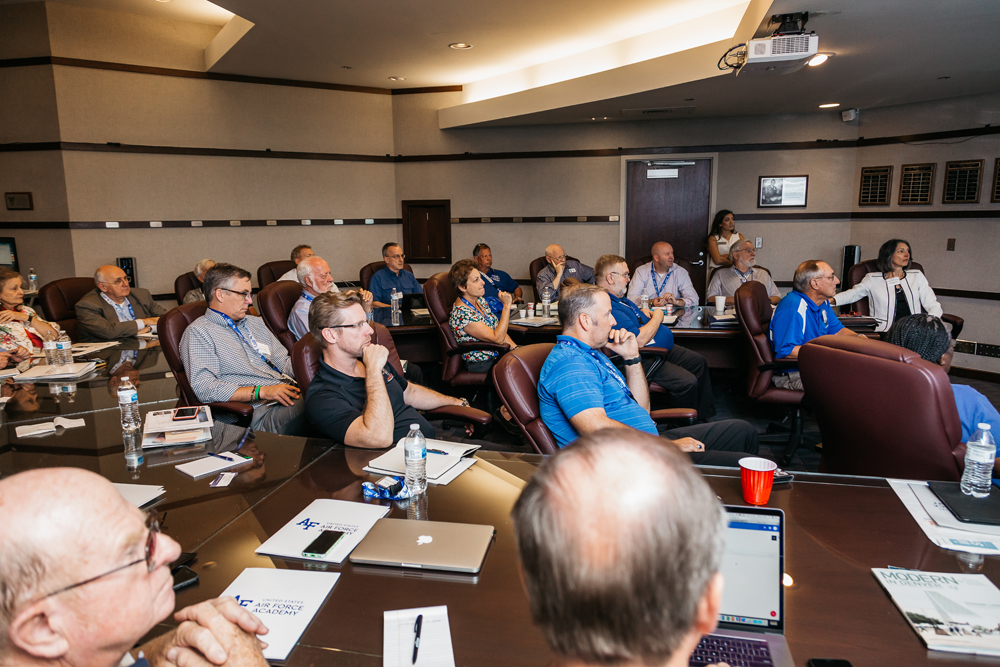 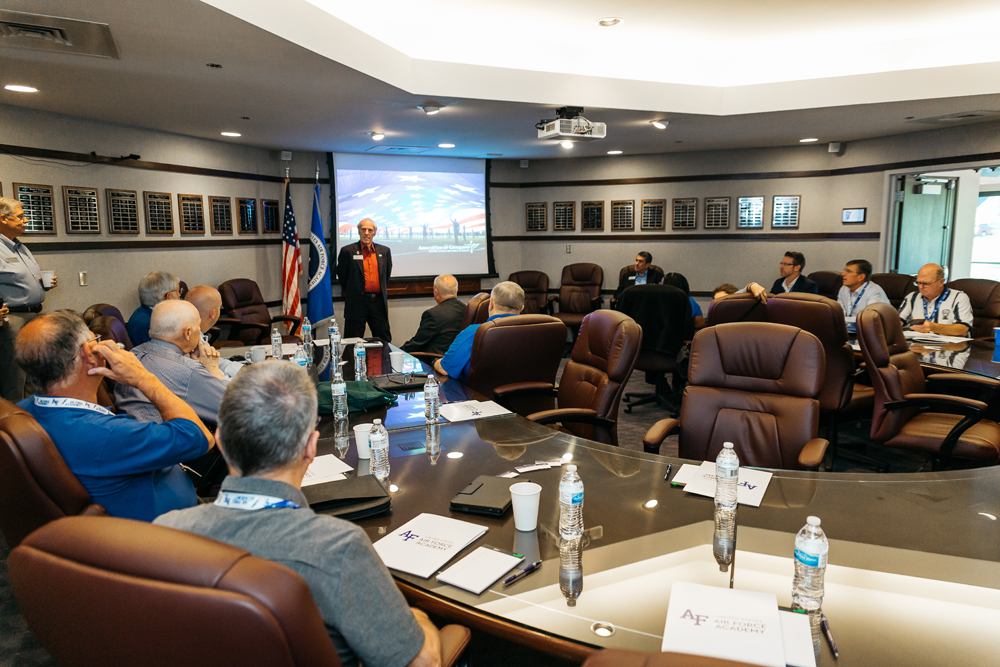 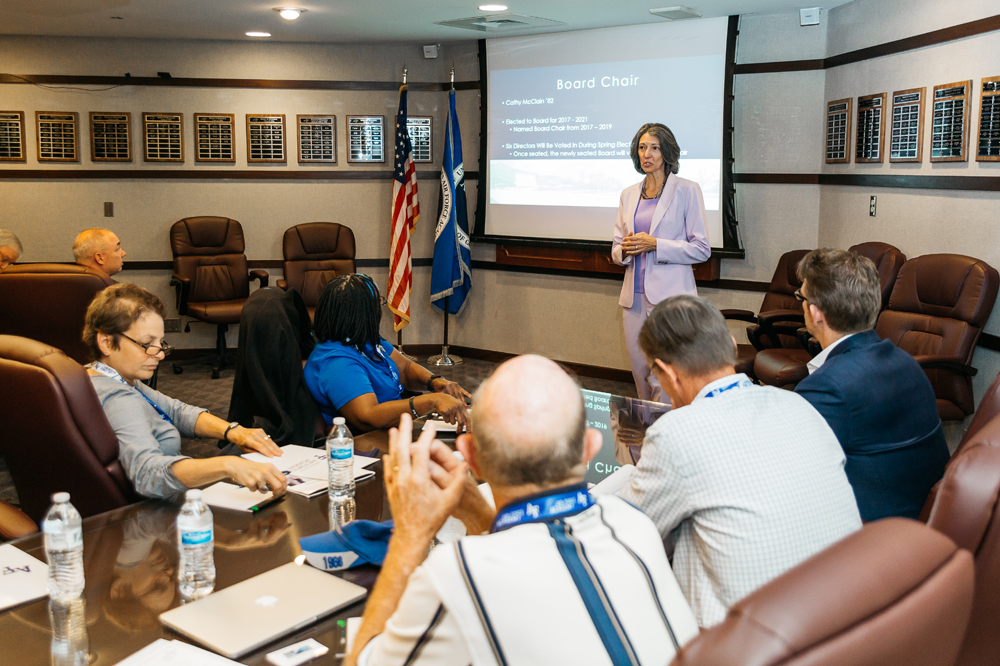 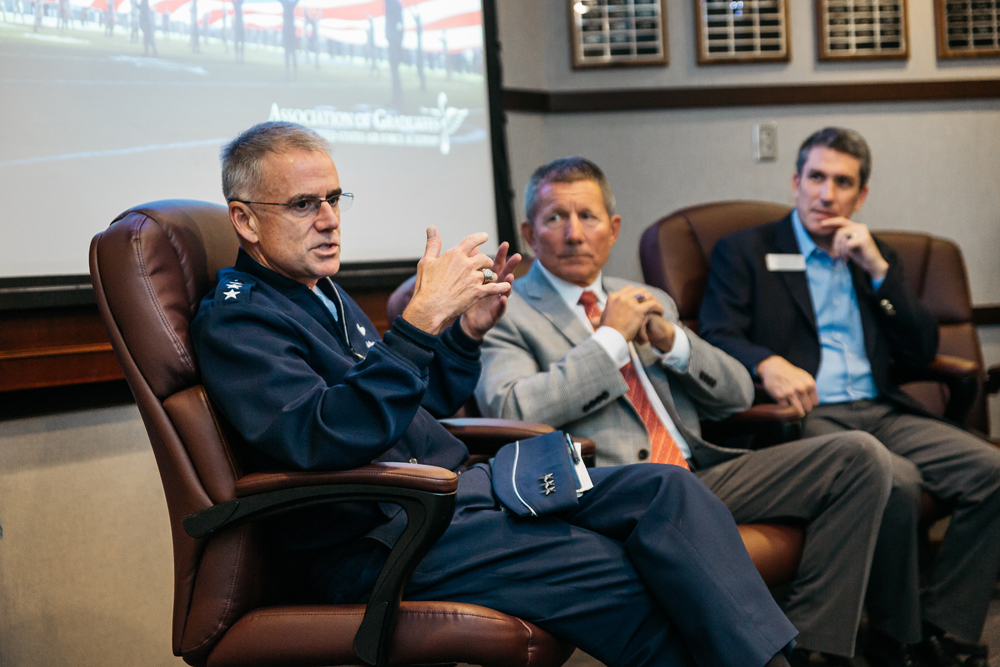 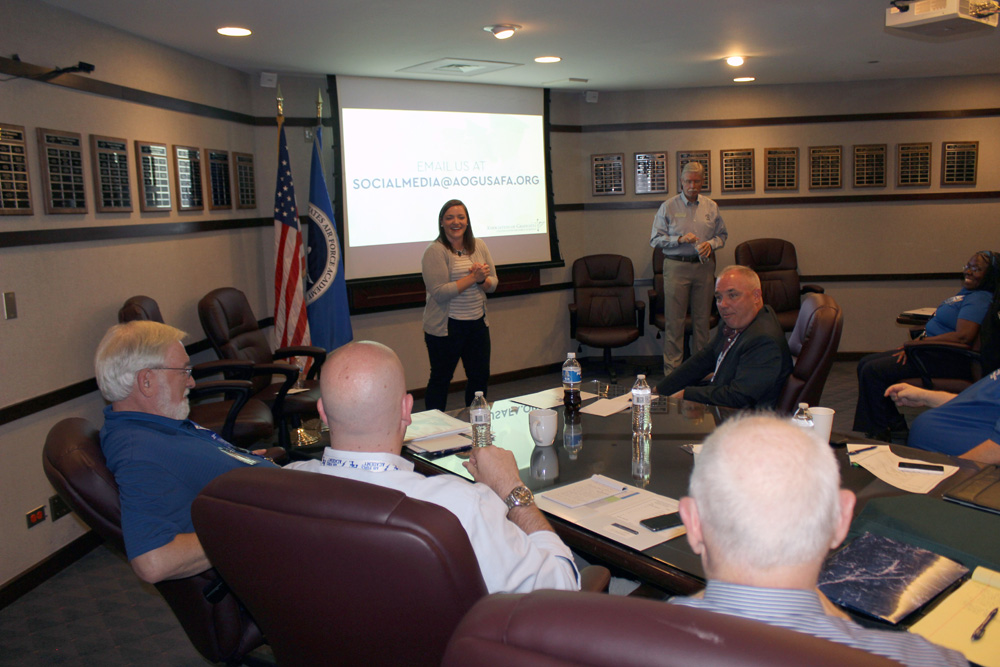 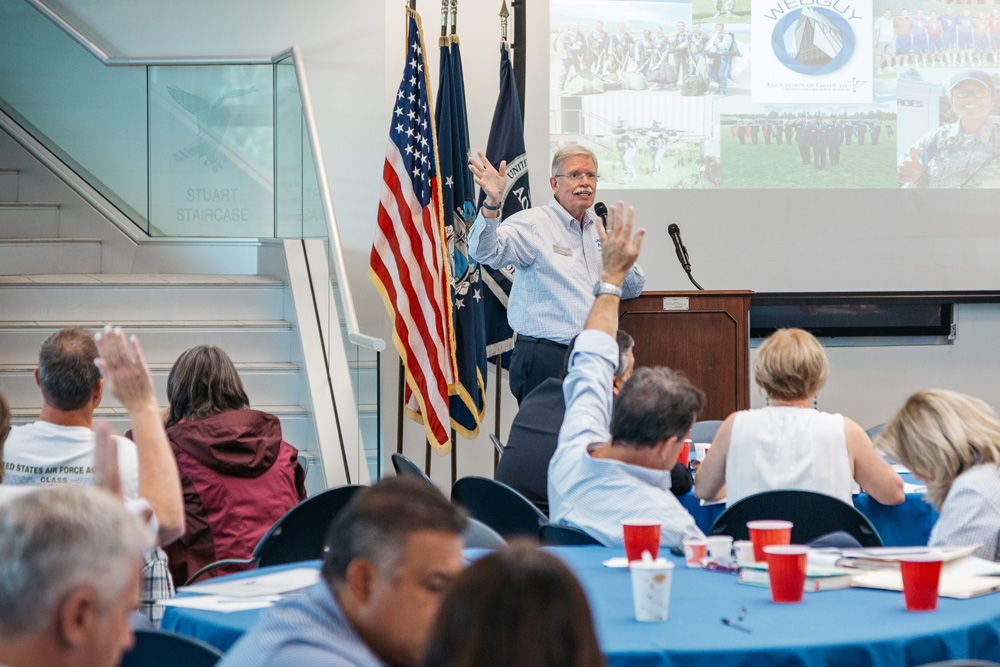 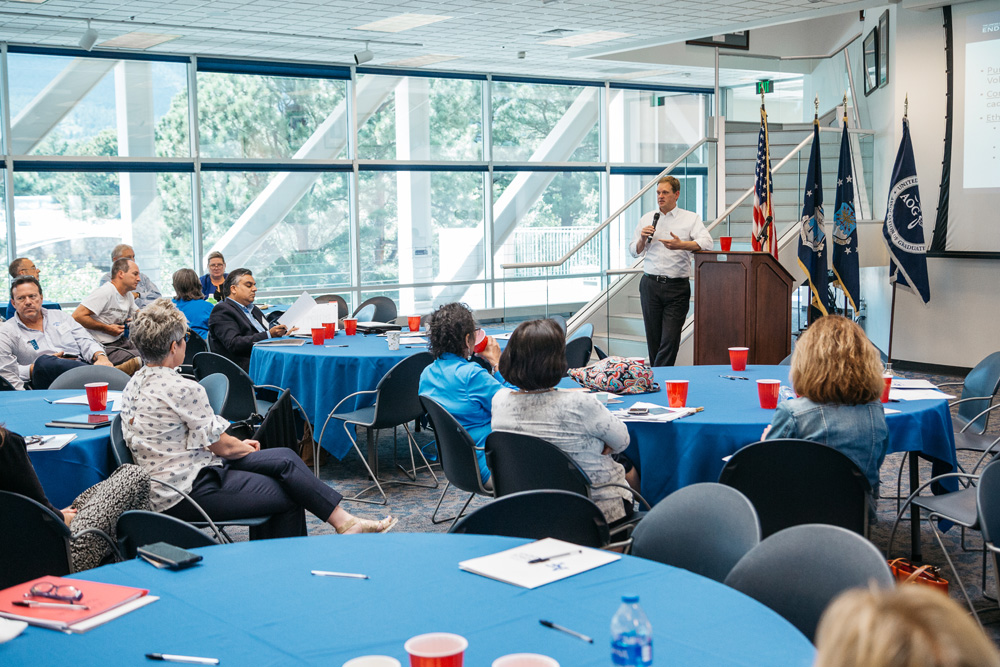 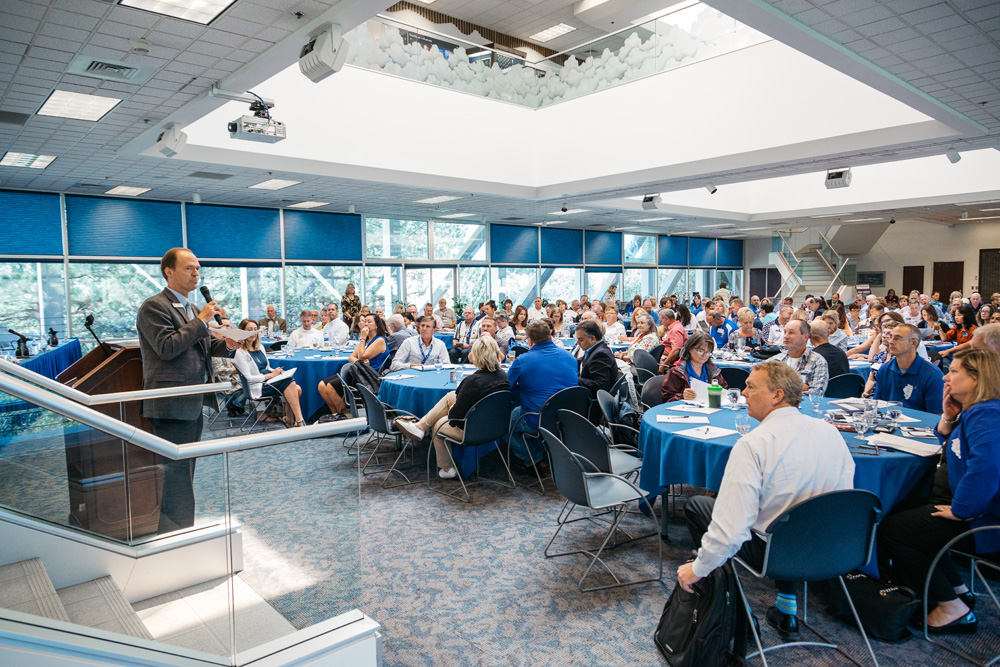 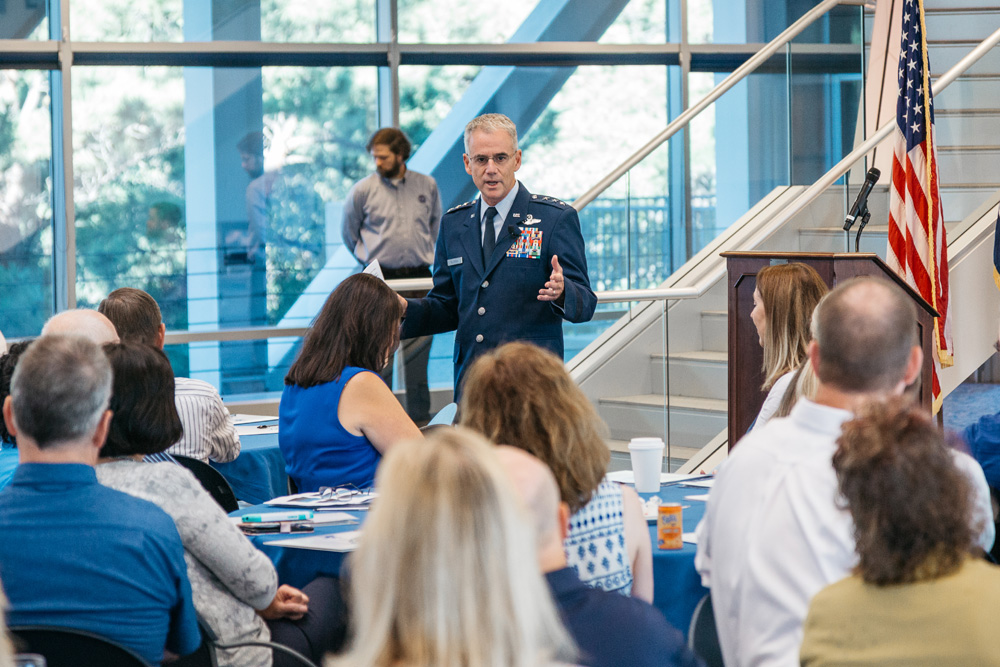 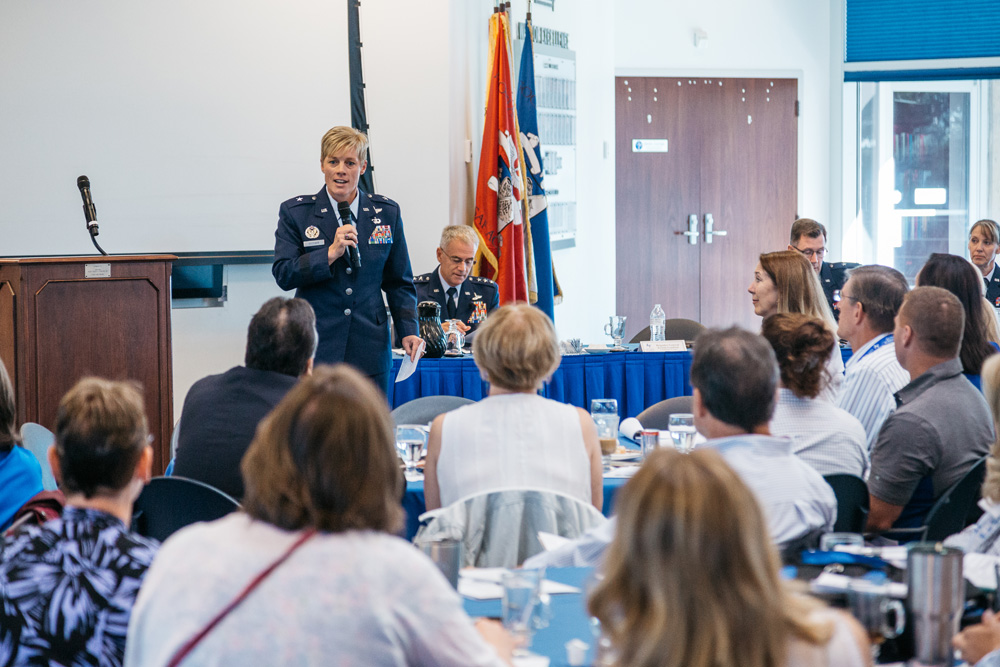 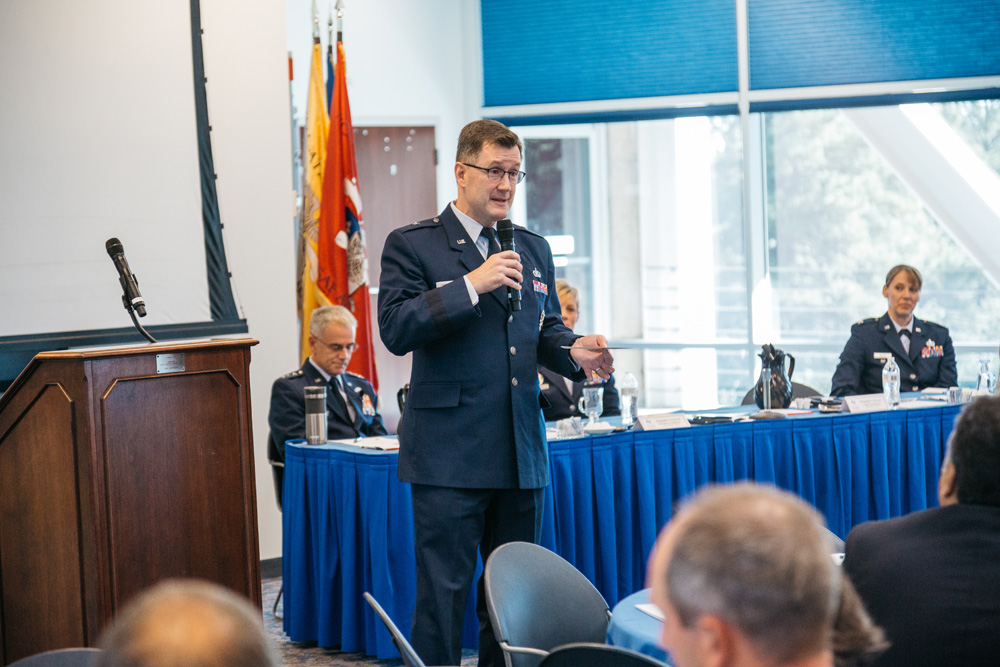 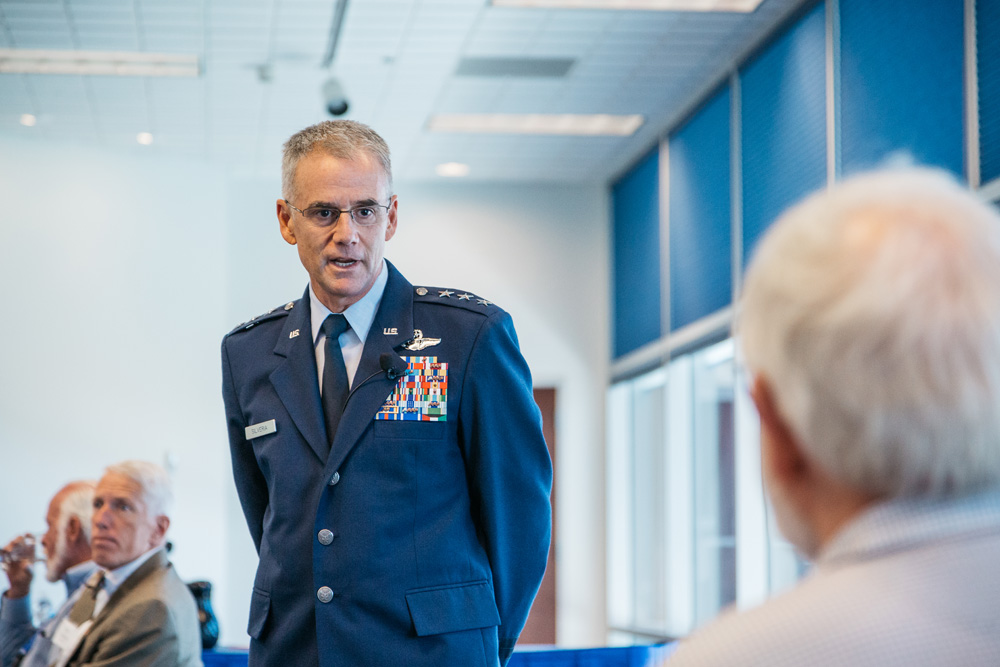