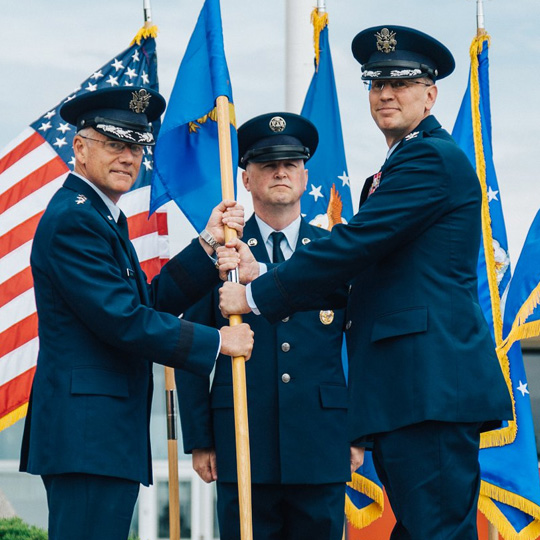 Col. Hartless comes to the Academy from the Pentagon, where he was the senior military assistant to the Secretary of the Air Force for Installations & Energy. Prior to that assignment, he was commander 86th Civil Engineer Group, Ramstein Air Base, Germany.

“Today we bid farewell to Col. Shawn Campbell after two incredibly fast-paced and productive years,” he told the crowd. “And we welcome Col. Brian Hartless to Team 10 and to the USAFA leadership team.

“The pace at the Academy can at time feel like a race. And incoming leader Col. Hartless will take the baton in that race from Col. Shawn Campbell, who has run an outstanding leg during his time here.”

Lt. Gen. Silveria thanked Col. Campbell for his leadership efforts while in command, noting that the mission elements his team was responsible for ranged from security to medical to food service. He singled out the 76 sustainment and modernization projects, totaling $215 million, that Col. Campbell has helped guide over the past two years.

In relinquishing his command, Col. Campbell thanked Team 10 for its hard work and dedication over the past two years.

“I am satisfied that I fulfilled the obligation that I promised to this wing and this Academy two years ago,” Col. Campbell said. “With courage as our constant companion, we worked very hard together and accomplished much. It has been the honor of a lifetime to serve Team 10 and this Academy.”

Campbell has commanded the 10th ABW since June 2017. He leaves the academy for a new staff position at the Pentagon.

When asked by Lt. Gen. Silveria for a recommended replacement for the 10th ABW commander, Col. Campbell said his clear choice was Col. Hartless.

“I know you are ready to take this leadership team to the next level,” he told Col. Hartless.

With each change of command, Silveria noted that opportunities abound for moving an organization forward.

“A new leader brings a fresh set of eyes to all of the challenges that we face,” he said. “They provide perspective from their own unique background and the experience that they’ve developed throughout their careers.”

After accepting the 10th ABW guidon, Col. Hartless pledged to execute the mission with excellence over the next two years. He said he recognizes the importance of the wing’s various mission responsibilities to the success of the Air Force and its Academy.

“Rarely in our Air Force do so many rely on so few for so much,” Col. Hartless said.

Col. Hartless said his predecessor will be a “tough act to follow,” but he looks forward to the challenge.

“The road ahead will not be easy,” Col. Hartless said. “But over the course of the next two years, I promise you my best, day-in and day-out. I look forward to serving with you.”

As the commander, Hartless is responsible for the preservation of and improvements to a $3.5 billion base infrastructure, and the operations of a regional medical infrastructure serving four U.S. Air Force installations. He will command more than 3,000 military, civilian and contract personnel who conduct all base-level support activities for the entire installation.