The three-year anniversary of the Cadet Chapel’s closure is fast approaching, and restoration work continues inside the fabric enclosure.

When the Chapel closed its doors on Oct. 23, 2019, officials expected the facility to be under construction four years. Due to the discovery of unexpected deposits of asbestos, the estimated reopening is now late 2026.

According to Marty Rickett, senior project manager with JE Dunn Construction, work on the interior and exterior of the Chapel has sped up since the asbestos abatement process and funding was approved.

The large steel and fabric enclosure hiding the Cadet Chapel from view has helped keep the project on track through all kinds of weather conditions, he notes.

“Quite honestly, it's going a little faster than we anticipated,” he admits.

The pew restoration, which is being conducted in Colorado Springs, is progressing well, he adds. Water damage on the pews is being patched with matching veneers.

In addition, the organ restoration work — being accomplished in Atlanta — is on schedule, he says.

“There were so many pipes that didn’t work on the organ,” he says. “A lot of the big pipes were almost completely full of water.”

The last round of Dalle de Verre stained glass removal is underway, according to Rickett. The individual panels are being cleaned and restored by Judson Studios in Los Angeles.

“There are 2,240 cassettes [framed glass sections], and there are over 24,000 dalles [stained glass bricks],” he reports. “Remarkably, we only have to repair about 200 dalles. It’s actually pretty impressive that after 60 years there are only about 200 that had cracks in them. And we only had to replace one dalle at the end of the day. We thought we were going to be close to 20, but Judson has done such a good job in their repair.”

Performance testing on the aluminum and skin system is ongoing in Texas, Rickett reports.

“We literally built two sections of the building full size, and we’ve run them through testing,” Rickett says. “Last week, they did the thermal testing. We ran the section from plus-180 degrees to minus 10 three times. And then we retested the performance tests.”

Following that testing, Rickett says, a few minor adjustments were made to aid in the longevity of the Cadet Chapel.

“We just want to make sure everything seals up right and works correctly,” he says.

When all is said and done, Rickett says the newly renovated Cadet Chapel will likely be the most tested building in the country. The contractor wants to ensure that the structure is tightly sealed and doesn’t leak — unlike the original Chapel that leaked from its early years.

Despite the challenges JE Dunn and subcontractors have faced over the past three years, Rickett says his enthusiasm for the restoration project remains high.

“Three years in and I’m still excited,” he says. “It'll be so cool to see this building when it’s done. It’ll be back to its original brilliance.”

One particular improvement he’s looking forward to is the amount of sunlight that will stream into the Chapel in the future. Due to storm windows installed over the original Dalle de Verre stained-glass cassettes, only about half the outside light made it inside the Protestant sanctuary.

“Now, it’ll be the full light that comes through the cassette,” he says. “It’ll really be brilliant.”

Rickett says he’s looking forward to the day when the enclosure comes down and the restored Chapel is again in plain sight.

“It’ll be a big reveal,” he says. “To see the building like it was 60 years ago is going to be really amazing.” 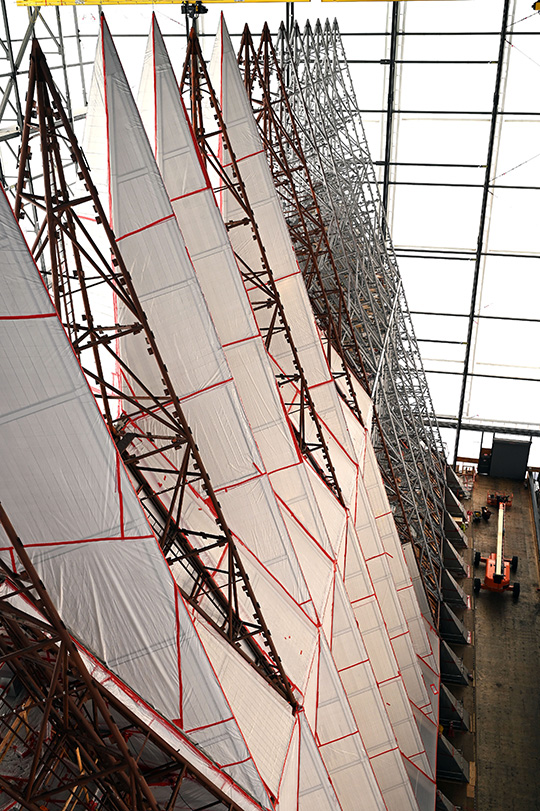