A Time to Heal

‘The Vietnam War’ recounts a difficult chapter in U.S. history 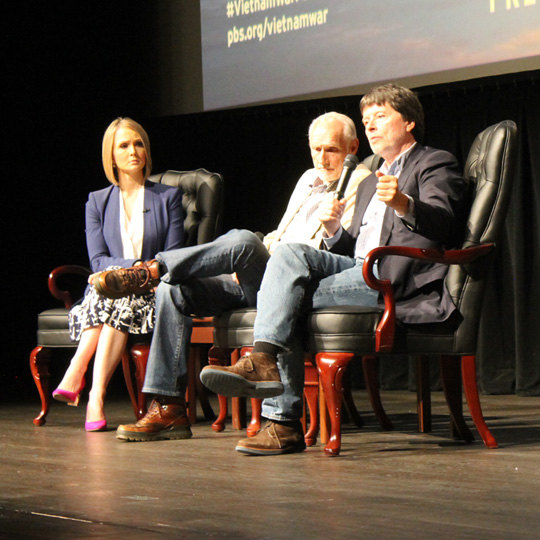 But his most recent effort, which took a decade to film and edit, could be of particular interest to the early graduating classes of United States Air Force Academy.

“The Vietnam War” is a 10-part, 18-hour series recounting the events that led up to the conflict and the battles and controversies that followed. It premieres on PBS on Sept. 17.

Ken Burns and one of his documentary interviewees, Gen. (Ret.) Merrill McPeak, stopped by Arnold Hall on Thursday night (Aug. 24) to preview the film and answer questions from the assembled audience. A large contingent of USAFA grads and Vietnam veterans was on hand, along with a significant portion of the Cadet Wing, to catch a glimpse of the upcoming project.

USAFA Superintendent Lt. Gen. Jay Silveria ’85 set the stage for the evening by calling the Vietnam War a “conflict that changed the nation.”

He claimed the “hard lessons” learned during that conflict helped make the American military and particularly the Air Force much stronger and more capable of handling the global challenges that came years later.

McPeak, a Vietnam fighter pilot who eventually became the 14th chief of staff of the Air Force during the Desert Storm era, applauded the documentary project for its ability to capture the full breadth of the Vietnam War experience. In the series, Burns tells the stories of U.S. veterans, political leaders, North and South Vietnam soldiers and civilians, anti-war activists and prisoners of war, while also capturing the political gyrations of the times.

“The Vietnam War is the most important event in American history since the Second World War,” Burns said. “It didn’t turn out very well for us, so we tended to bury it and not deal with it. We’ve allowed a lot of its wounds to fester unhealed and remain undiscussed. I felt it was incumbent upon me, after doing [documentaries on] the Civil War and the Second World War, to turn my attention to the Vietnam War.”

Once he started researching the war, Burns said his preconceived notions about that period were quickly swept away. Because he was a young man during the Vietnam era, Burns was convinced he had a good handle on the facts surrounding the conflict and the civil unrest that it caused.

McPeak recounted the many advances in warfare that resulted from the Vietnam experience, noting that such technological discoveries as stealth aircraft, precision munitions and infrared equipment used for night fighting helped the U.S. military become a feared opponent on any battlefield.

He noted that military training also improved during that era, helping to elevate the armed forces further above our enemies.

“Vietnam came along and showed us that we weren’t prepared to fight conventional war,” McPeak remembered. “We were prepared for a deterrence mode. We had to do a massive change in our training programs. The technical lessons that we learned in Vietnam were quite extensive, and they transferred directly into Desert Storm”

Another important lesson from that era, McPeak suggested, is the need for military personnel to be professional while completing the mission.

“Personally, I’ve given up on trying to explain the policy decisions of my government. I think it’s a good idea for you to do the same, as long as you’re wearing the uniform,” he told the cadets. “Our job is to go fight when the president says to go fight. If you spend too much time worrying about his motives, instead of worrying about can you actually put a bullet to the target, you’re worrying about the wrong thing. While you’re wearing the uniform, you have to be the best warrior you can be.”

Both McPeak and Burns said that lessons from the Vietnam era could be helpful in healing the divisions we find in American society today.

McPeak says that he attended a screening of the finished documentary with early anti-war activist Bill Zimmerman and others with divergent recollections of the war. He said the group was able to discuss each episode — sometimes through heated exchanges — and yet remain respectful and friendly toward each other.

“We had some real, knock-down-drag-out sessions, as we discussed each episode of the film from our own point of view,” McPeak said. “What it would be nice for the Americans to remember is that we all came out of there as friends.”

“The first thing to remember is there’s not one truth, particularly in war,” Burns added. “There are many different perspectives and many different truths. It’s now time to talk about it.”

U.S. President Abraham Lincoln had it right when — on March 4, 1861 — he spoke of unifying the divided country during his inauguration speech, Burns said.

“We are not enemies, but friends. We must not be enemies,” Lincoln said. “Though passion may have strained, it must not break our bonds of affection. The mystic chords of memory, stretching from every battlefield and patriot grave, to every living heart and hearthstone, all over this broad land, will yet swell the chorus of the Union, when again touched, as surely they will be, by the better angels of our nature.”

It’s good advice for those who refuse to compromise or fail to strive toward the unity of our nation, he suggested.

“We do live in particularly divided times right now, but I don’t think anybody really enjoys that,” Burns told the crowd. “We now have arguments for the sake of arguing. But the whole purpose of arguing is to work stuff out — that’s what we’re supposed to do. They aren’t to have somebody get more firmly entrenched.

It’s how the country was founded was on compromise. It’s how we’ll get out of the mess we’re in now.”