CS-01 Remembers One of Its Own 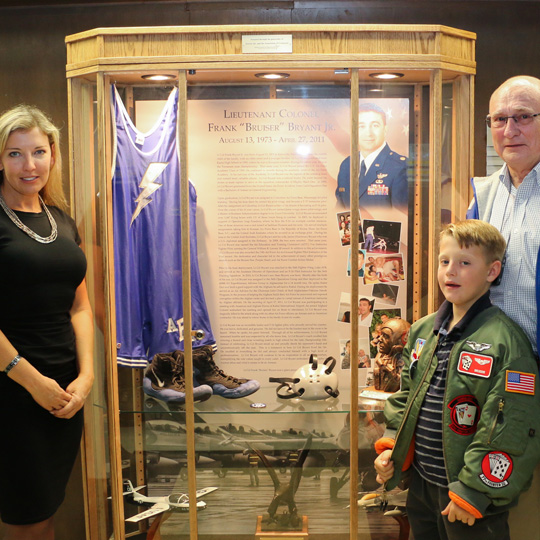 The cabinet highlights the life of Lt. Col. Frank “Bruiser” Bryant ’95, who was tragically gunned down on April 27, 2011.

Lt. Col. Frank Bryant, Jr., was born Aug. 13, 1973 in Knoxville, Tennessee. During his United States Air Force Academy career, he wrestled for the Falcons and was the team’s captain and most valuable player during his first-class year. In addition, he served as the squadron commander of Mighty Mach One.

Upon graduation, Lt. Col. Bryant was assigned to Columbus Air Force Base, Mississippi for pilot training. During his time there he earned his pilot wings and became a T-37 instructor pilot.

After his assignment at Columbus, he achieved his dream of becoming an F-16 pilot. Over the course of his 16-year career, Lt. Col. Bryant accumulated over 3,047 flying hours with 121 of those hours being in combat. In 2003, he deployed in support of Operation Iraqi Freedom, where he flew the F-16 on multiple combat missions. One of those missions was a raid aimed at Saddam Hussein and his sons.

He served multiple assignments taking him to Kunsan Air Force Base in the Republic of Korea; Shaw Air Force Base, S.C.; and the United Arab Emirates, where he severed as an exchange pilot.

Prior to his final deployment, Lt. Col. Bryant was attached to the 56th Fighter Wing, Luke AFB, and served as the assistant director of operations and an F-16 pilot instructor for the 56th Training Squadron. In 2010, he was deployed to the 438th Air Expeditionary Advisor Group in Afghanistan for a 14-month tour. During his deployment he served as an air advisor for the Chairman Joint Chiefs of Staff Afghanistan-Pakistan Hands Program. In the process of helping the Afghans build their Air Force he uncovered and exposed corruption within the Afghan ranks and devised a plan to curtail misuse of American resources by Afghan officials.

On the morning of April 27, 2011, Lt. Col. Bryant was participating in a meeting with American and Afghani Forces at Kabul International Airport. An armed Afghani colonel ambushed the meeting and opened fire on those in attendance. Lt. Col. Bryant, six other Air Force officers, an airman and an American contractor were tragically killed in the attack.

There are currently 14 cabinets positioned throughout the cadet dorms. Each cabinet is dedicated to a fallen graduate, with mementos displayed representing the life of the individual who paid the ultimate sacrifice since Sept. 11, 2001.

The squadrons work with family members to gather up memorabilia that will be on permanent display at the Academy. Each display case is unique to the fallen hero and his or her interests.

The Association of Graduates continues to assist in the research, graphic creations and cabinet purchases as the program continues. More than $20,000 has been raised to support the cabinet program through the years.