Jim “Bo” Bowman, an honorary member of the Association of Graduates who joined the United States Air Force Academy Athletic Department in the Lowry Air Force Base days and served in the department for nearly 50 years, passed away Aug. 20 in Oregon. He was 89 years old.

His impact on the Academy, the Air Force and the nation was profound. He brought in and helped develop cadets who went on to serve the nation, in and out of a military uniform, in a wide variety of fields.

The Michigan native attended the University of Michigan and participated in the ROTC program. Bowman also played on the Wolverine football team, lettering as a center.

Upon graduation from Michigan in 1956, he completed pilot training at Reese Air Force Base, Texas. First Lt. Bowman began his Academy work as a physical education teacher in 1958, the same year he joined Coach Ben Martin’s football staff as the scout team coach.

“Bo” later moved to the intercollegiate side full time. For 15 years, he was head coach of the Falcon junior varsity and freshman football teams. He compiled an overall record of 61 wins and 32 losses, with his 1963 and 1975 teams enjoying undefeated seasons. During his illustrious career, he served as mentor to many Academy and Air Force superstars, to include Vietnam ace Steve Ritchie ’64, Medal of Honor recipient Lance Sijan ’65, former superintendents Paul Stein ’66 and Mike Gould ’76, and the current superintendent, Richard Clark ‘86.

Capt. Bowman left the active-duty Air Force in 1963, one year before adding another responsibility to his coaching duties — associate athletic director for cadet counseling. In 1975, Coach Bo stepped away from the football field, devoting all of his attention to administration. He held the cadet counseling position for 43 years.

Among his tasks was working with congressional staff members to obtain nominations for prospective cadet-athletes. He proved exceptionally adept in this role, as his enthusiasm and professionalism won friends in Washington, D.C., and throughout the nation.

Bowman played an instrumental role in establishing the women’s athletic program when female cadets first arrived at the Academy in 1976. The Academy’s intercollegiate offerings went from 15 teams to 27, and Bo adeptly worked closely with coaches, the Academy Admissions Office, and congressional offices to fill those teams with qualified cadets.

At the conclusion of 1997-98 season, the Academy ice hockey program began presenting an award in his name — the Jim Bowman Award (Scholar-Athlete). “The Bowman” is presented annually to the upperclassman who has excels both in the classroom and on the ice.

Coach Bowman expressed his pride in the Academy in a 2005 interview, saying, “The best thing about this school is what these athletes do after they leave here, how they turn out as people. We’ve had major command leaders, wing commanders, astronauts, war heroes and more. That’s more important than how many touchdowns they score.”

Upon his 2007 retirement, he and his wife, Mae, moved to Corvallis, Oregon, to be close to family and to do some trout fishing. He was back at the Academy that November, when the Academy honored him by dedicating a plaque that still hangs outside of the superintendent’s box at Falcon Stadium. The placement was significant, as Bowman had hosted recruits in that area of the press box for many decades.

A few statistics can help quantify Jim’s longevity at Air Force. Over his nearly 50 years at the Air Force Academy, he oversaw the recruitment and admission of approximately 14,000 cadet-athletes. While employed at the Academy, he worked with hundreds of leaders, including 16 superintendents, 22 commandants of cadets, eight deans of the faculty, and eight directors of athletics. Almost 39,000 cadets graduated during his tenure.

His half-century of excellence was recognized by several organizations, with the Association of Graduates being the first. In November 1994, the AOG’s Board of Directors named Jim Bowman an honorary member. Honorary membership may be awarded to non-graduates who have rendered outstanding and conspicuous service to the Air Force, the Academy and/or the AOG. Honorary members must be recommended by a member of the AOG Board and, at the time of his selection, were required to receive unanimous acceptance of all directors. Membership is limited to 25 living persons.

Lt. Gen. (Ret.) Mike Gould ’76, CEO of the AOG and the Air Force Academy Foundation, recently reflected on the tremendous impact Bowman had on his life.

“If not for Coach Jim Bowman, I might have never set foot on the Air Force Academy,” he said. “My dad was Bo’s ROTC instructor at Michigan ’53-’54. They developed a life-long friendship which led to Coach Bowman’s interest in an undersized, undertalented quarterback and defensive back in 1971. In a very long shot, Coach Bo offered me a Prep School slot two weeks prior to BMT Lackland report date. The rest is history.”

In November 2001, Bo was inducted into the Colorado Springs Sports Hall of Fame as a member of the 1958 football team. The ’58 squad finished with an undefeated record (9-0-2) including a scoreless tie with Texas Christian University in the Cotton Bowl (back when there were only four bowl games). It was the first bowl appearance of an Academy team.

Coach Bowman was part of the second Air Force Academy Athletic Hall of Fame class, which was inducted in 2009. Among the six 2009 honorees was Ben Martin, with whom he worked from 1958 until 1977. The Academy Athletic Hall of Fame began in 2007 with six selectees, which means that “Bo” was among the first dozen people honored for his performance in an athletic program that had been in existence for more than 50 years.

Coach Bowman’s memorial service will take place at 10 a.m. Oct. 20 at the Academy Cemetery’s Memorial Pavilion. A Celebration of Life will follow at 11 a.m. in the Falcon Stadium Press Box. 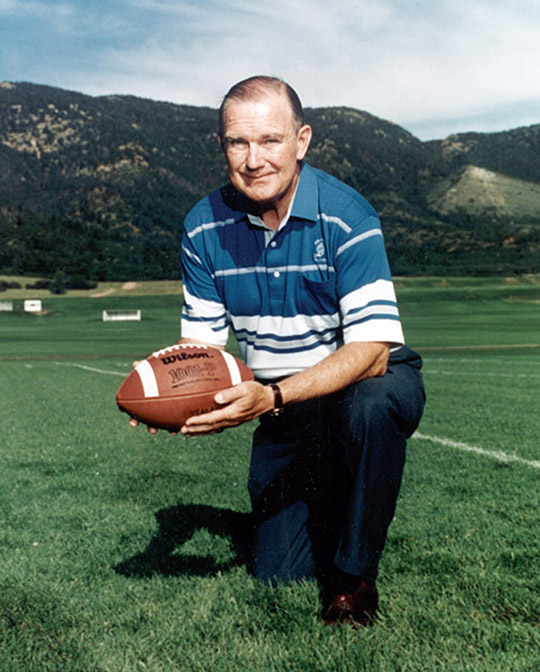