Ever since Doolittle Hall opened in 1992, members of the Association of Graduates’ Board of Directors would converge on the AOG headquarters building every three months or so for board meetings. Directors, AOG staff members, senior Academy officials and other guests would meet in the Board Room to take care of the alumni organization’s business.

Over the years, directors who had scheduling conflicts could call in. As video conference software appeared and became more reliable, absent directors were able to participate visually by logging into the meeting using the Zoom video conferencing platform.

That capability came in very handy as the AOG’s May 2020 board meeting neared. With the Academy essentially closed, travel largely shut down, and most of the United States (indeed the world) sheltering at home due to the COVID-19 virus, it became necessary for the meeting to either be cancelled or take place virtually.

The pressing responsibilities of the AOG prohibited the cancellation of the meeting, so it went online. On May 8th, for the first time ever, the AOG held a quarterly Board of Directors meeting entirely via video conference. The only people in Doolittle Hall were a few safely socially distanced members of the AOG staff.

Despite being scattered all over the country, all 16 members of the board “attended.” Board chair Cathy McClain ’82 was able to conduct a perfectly ordinary board meeting under extraordinary circumstances. The board dealt with typical business such as receiving reports from board committees, approving the budget for the fiscal year that begins on July 1st, and authorizing ground rules for the election that will take place in early 2021.

The AOG is fortunate to have a close relationship with the Academy. Typically, a member of the Academy senior staff will attend the board meeting to provide an update on Academy matters.

The May meeting was no exception, as USAFA Superintendent Lt. Gen. Jay Silveria ’85 appeared, apparently from his home, to brief the board and answer questions. The session was especially informative, as so much is happening at the Academy as he and his staff deal with the effects of the pandemic. Among other topics, he recapped the end of the Class of 2020’s remarkable cadet career and spoke of the plans to bring in the Class of ’24 next month.

Gen Silveria also took the opportunity to praise the AOG and the entire graduate community for its exceptional work in support of the Academy during the difficult past few months.  He offered special thanks for the efforts on behalf of the Class of ’20, to include the letters of support, the “care” packages, and the Firstie Departure.

The meeting closed with another historic first: an address by the organization’s first “Single CEO.” In the 2019 election, the AOG membership permitted the AOG to join with the Air Force Academy Foundation to hire one senior executive to lead both organizations.

Lt. Gen. (Ret.) Mike Gould ’76 was chosen to fill that role and assumed the position on May 1. Gen. Gould wrapped up the meeting by addressing the board and laying out his vision for the organization.

While the conditions were unexpected and unusual, the AOG Board of Directors was able to hold its May 2020 meeting, in the process breaking new ground by meeting without actually meeting. 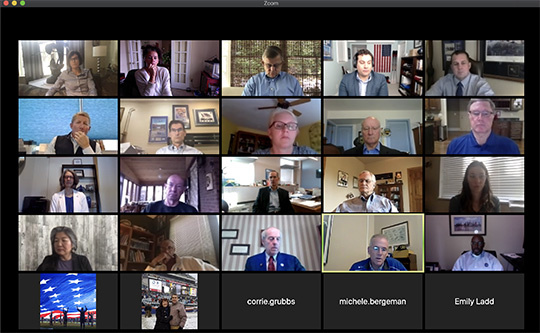